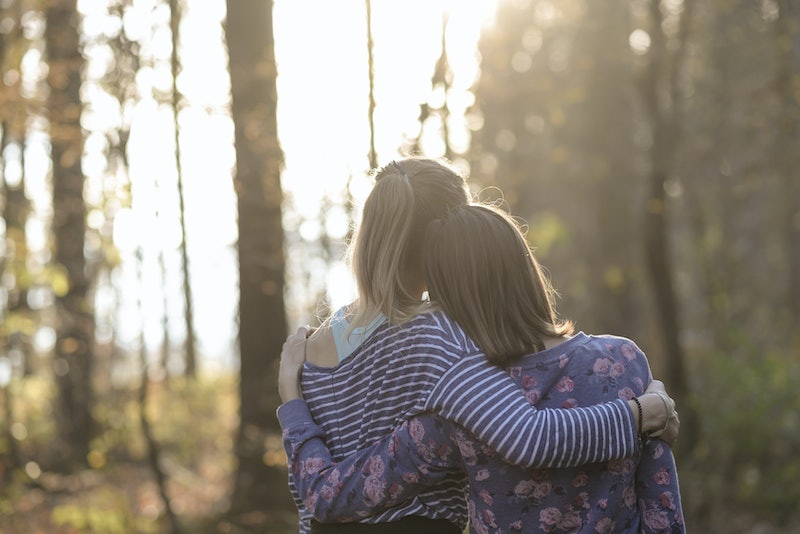 I'm bisexual and I've only had a couple of serious relationships ever — until now, they've been with men. But now it's my first relationship with a woman, and it's interesting to see the difference. I find it a little strange, because many bisexual people will have experienced lots of anti-bisexual prejudice and skepticism, but if I'm honest I haven't really. I mean, there are some things I've dealt with— assumptions of infidelity or indecision— but for the most part there's been a whole lot of heteronormative privilege I've experienced because most of my relationships have been with men. It's just happened that way.

I've had flings and things with women before, and gone on dates with women, but it's the first time it's reached "This is my girlfriend" status. Which for the most part, hasn't been a big deal. Well, maybe that's not true— it's a big deal because it's the first relationship I've been in in ages, not because it's with a woman. Me being with anyone seriously is a bigger deal than the gender and most of my friends and family are not the least bit phased or surprised about it being with a woman. I've always been really open about my sexuality and I'm really lucky that, besides some family reticence, it really has never been too traumatic. That being said, it would be disingenuous to say that there weren't strange things that happened now that I'm in a relationship with a woman.

Here five things that happen when you're in a serious relationship with a woman for the first time:

When you're bisexual, no one assumes that you've suddenly gone straight when you're in a relationship with a man. Or if they do, they don't say it— which is maybe worse, assuming that you've gone back to the default of something. But now all of a sudden there's a lot of a "So do you not like men anymore?", "So are you gay now?", and even "So were you always gay?". Still attracted to men, still attracted to women. Sorry, folks.

2. Some People Are Jerks

Yeah, all the same stuff that I've gotten when I've been publicly affectionate with women before, but I guess now that I'm in a relationship with someone I really care about, I'm more protective of it. So the hooting and hollering, the stares, the comments— I found them all easier to blow off when I was just having a fling, where as now it gets to me more and I probably notice it more. I still haven't figured out the right way to handle it, but there's a whole lot of "appreciative" cat calls and staring to deal with.

3. But Some People Are SUPER COOL WITH IT

Nice... in a way. Along with the jerks, there are people that are really, really over the top supportive just out of the blue. There's this sweet, but also kind of patronizing "Oh, you two!" attitude that comes from waiters and other people I meet when out. At one of my favorite bars, the waiter asked everyone else to leave when it was closing time, but just kept telling us to take our time. I don't know if it was pervvy or hie or what, but it was strange. You get a lot of of looks like they feel the need to be say "By the way, totally respect this. Super OK with all of this! Look how cool I am!". I don't mean in an overcompensating way, I'm sure that they are totally cool with it— it's 2015— but I'm a little overwhelmed sometimes by how many people feel the need to show exactly how open-minded and liberal they are.

It is probably really obvious— I mean, it's basic math— but two women means twice as much period time. Whether you're for or against period sex, there's just more period happening. Normally periods sync up, but with my PCOS I don't know if that's a real possibility or not. But the good news is double the excuses to eat loads of delicious period junk food. "Oh, I got this for you, babe!"...sure I did...

5. They Already Have All Of The Things

Not just tampons for the double period time, but being with a girl rather than a man means their normally more equipped with some basic needs. I don't wear fancy makeup, but eyeliner and mascara is pretty much my day to day uniform, no matter what I'm going to, but I know she'll have makeup remover and face wash and frankly a lot of fancy stuff I don't even use because I am the laziest girl in the world. But it's a lot easier being able to pool your resources, and my morning smudged eyeliner looks slightly less horrifying when I there's something to help me scrub it off the night before.