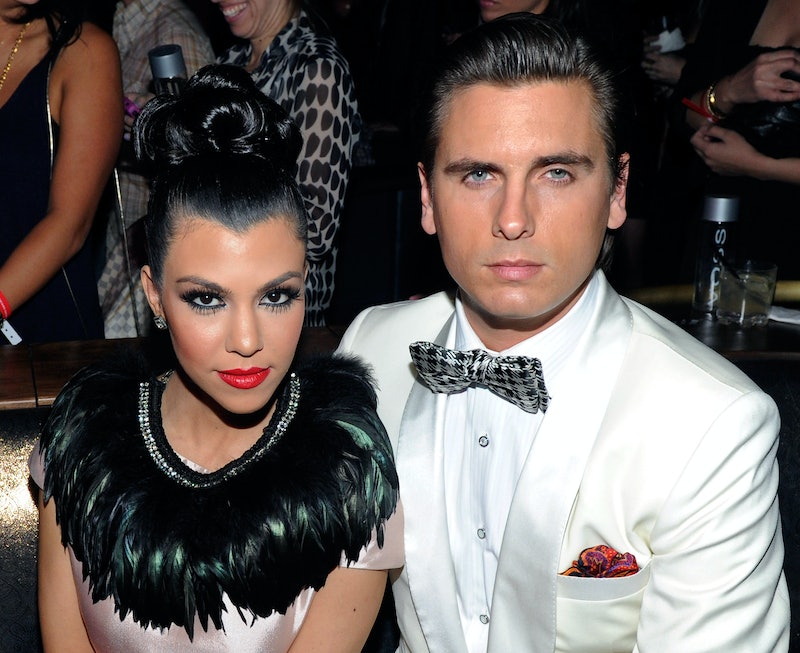 If you've ever questioned the magic and power of Turkey Day, you have to stop that right now, because pretty much the entire Kardashian-Jenner clan reunited for Thanksgiving, even several couples who were separated, last we checked! I'm talking specifically about Kourtney Kardashian and Scott Disick, who split in June after nine years and three children together, but who both appear in the group photo that Kim Kardashian posted to her Instagram on Nov. 26. How do you do what you do, you magical day of turkeys and love?? In the picture, the two are standing near each other, Disick holding their son Mason and Kardashian holding their daughter Penelope, while Kris Jenner cradles their youngest, Reign, but not actually making contact, like the rest of the couples pictured. So it seems like Jenner and Disick are pulling it together for the occasion, but I wouldn't say this is proof — or even a suggestion — that they're getting back together. Just that they're great parents who are willing to put their differences aside so their kids can have both parents present at the dinner table.

But speaking of the other couples present, there's yet more Thanksgiving magic at work here still to discover. Kanye West showed up, of course, as did Kris Jenner's boyfriend Corey Gamble, but we also see Kylie Jenner's rumored ex -boyfriend Tyga with his arm around her, which is pretty definitive proof that they haven't actually broken up, as everyone's been speculating. And finally, maybe the most exciting thing of all is that this is Caitlyn Jenner's first Thanksgiving since coming out as transgender, and it's amazing to see her in this portrait, surrounded by three generations of family members who are just as welcoming of her now as they were when she and Kris Jenner were still together. Caitlyn Jenner belongs in this photo and in this incredible blended family, and it couldn't be more heart-warming to see her there. Say what you will about their life in the spotlight, but the Kardashian-Jenners know how to pull it together and show support when it really counts.

The only absence that's a little glaring for me is Rob Kardashian's — I wonder if even Lamar Odom might have been there if his recovery had permitted? — but if there's one thing that this family portrait proves, it's that Rob Kardashian will be welcomed with open arms just as soon as he's ready to come on back to the fold. Thanks for reaffirming my belief in the combined powers of tryptophan and love, Kardashian-Jenners!