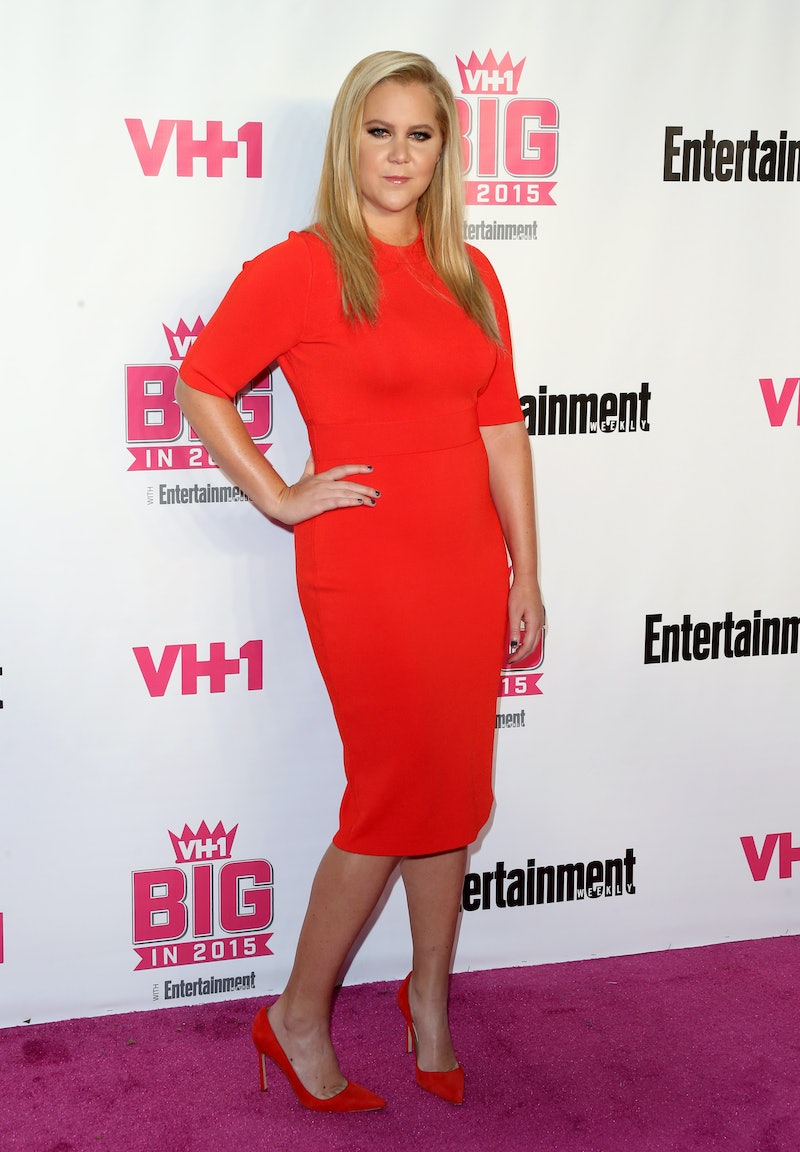 After consuming a massive Thanksgiving feast, chances are your stomach may still be settling. While you may never want to see cranberry sauce again (or at least not for another year), there's something that may spark a bit of Turkey Day envy. No, it's not that fantastic-looking apple pie your friend posted on Facebook. Instead, it's Amy Schumer and Jennifer Lawrence, as well as the rest of the comedian's Thanksgiving squad. The funny lady apparently celebrated the holiday with two other hilarious individuals — Lawrence and Aziz Ansari — in addition to her other friends. Talk about #squadgoals! (Yes, I'm just as sick of that phrase as you are, but in this case, it totally applies.)

On Instagram, Schumer shared a photo of J.Law and Ansari standing on a beach. She captioned the snapshot, "Thanksgiving dreams," which is appropriate, considering it looks like any fan's dream-come-true. They're all bundled up (probably since it's almost winter), but they're grinning nevertheless. I can only imagine the hilarity that ensued when these three hung out.

And guess what? This isn't the first time this epic trio spent time together. Lawrence and Ansari were there when Schumer hosted SNL and gave one another piggyback rides afterwards. They've also gone on a hiking trip, and hung out with Chris Pratt. In a way, these three are like a modern version of Lizzie McGuire , since their friendship is worthy of its own TV series. For the sake of analogy, I suppose Schumer would be Lizzie, while Ansari is Gordo and Lawrence is Miranda. (Can someone please make this spin-off happen?)

Not only did she hang with two of the funniest people around, but the comedian also spent the holiday with family. Here's a round-up of Amy Schumer's Thanksgiving weekend, as told through Instagrams.

Warning: Photo above will cause uncontrollable amounts of FOMO. Although I normally would be opposed to a beach trip when it's so cold out, I'd make an exception to hang with these guys.

One of Schumer's friends got engaged. A sweet way to celebrate the holiday, huh?

Let's be real, Amy Schumer's face is all of our faces when another person you know gets proposed to. (Obviously she's kidding, though! There's an exception to the eye-rolling when someone you care about is getting married.)

Amy Schumer spent quality time with her dad, who's apparently rocking a jacket that Amber Rose gave to the comedian.

In case you were wondering, Mindy Kaling very much approves of this hangout.

Not only did she spend time with her dad, but Amy Schumer dined with her mom in this photo posted on Saturday. Sure, famous friends are cool and all, but family is everything.

Last but not least, this amazing throwback of Schumer dressed like a turkey. Can she put on the same costume at her next stand-up routine?

That settles it! Amy Schumer celebrated Thanksgiving in the best way possible. Here's hoping this isn't the last of the Schumer-Lawrence-Ansari squad.