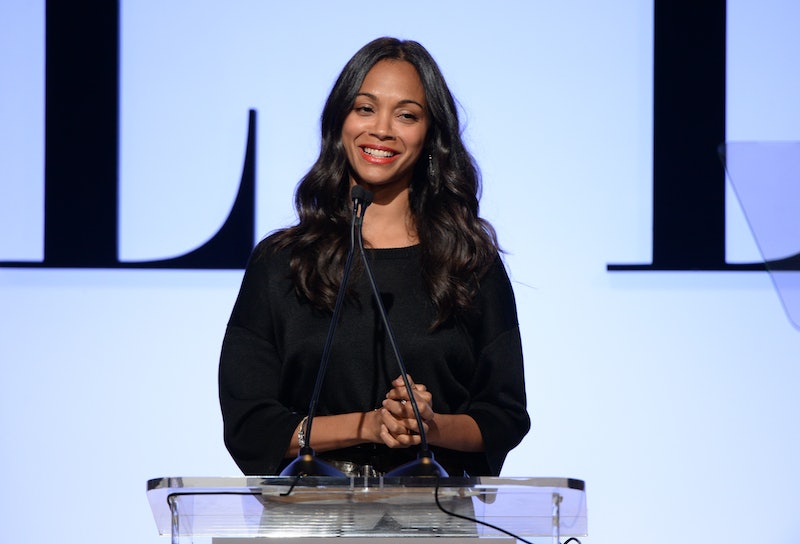 Crank up your Awesome Mix, because the Guardians of the Galaxy are heading back into action — and warrior that she is, Gamora is leading the charge. The first behind the scenes picture from the Guardians of the Galaxy Vol. 2 set comes from none other than Gamora herself, Zoe Saldana. Over the holiday, Saldana tweeted a photo collage of herself sitting in the hot seat (also known as the makeup chair), becoming Gamora. It turns out Kermit was right: it really isn't easy being green. There's no CGI friendly jumpsuit for Saldana to hop into — she actually goes green for Gamora, which explains why the character looks so amazing and natural.

During an interview with David Letterman in 2014, Saldana told Letterman it takes four to five hours of makeup to complete the transformation into her GOTG character. An Allure interview with special effects makeup designer David White shed further light on the process which involves air brushing, prosthetics, and a whole lot of green and yellow primers and bases. As amazingly intricate as the process sounds, '90s kids will likely only be able to think of one thing when they see Saldana's collage: being slimed on Nickelodeon. Trust in Saldana though — the act of becoming Gamora is complex and likely exhausting. I know thinking about the patience she has to exercise gives me mad respect for her. Behold the magic of movies, everyone!

With Saldana getting back into the Gamora groove, it is only a matter of time before more Guardians of the Galaxy Vol. 2 news starts rolling in. Director James Gunn has already promised the sequel will be putting family matters first. The chances of Star Lord meeting his father are high, but Karen Gillan (Nebula) recently revealed Gamora and her sister Nebula will get in on the family action as they explore their complicated relationship. Add in the found family aspect that is built into the story, and the emotions are already getting very real.

Just seeing Saldana going the process of becoming Gamora again has me psyched. Guardians of the Galaxy was easily one of the best movies Marvel has done so far,and who doesn't want to return to that world? There's so much left to explore. Not only does Star Lord need to meet his dad as much as Gamora and Nebula deserve a chance to repair their sisterly relationship, there's also the matter of seeing Groot return to full size after his heroic sacrifice, watching Rocket continue to be the mouthy genius raccoon you never knew you needed in your life, and Drax taking everything hilariously literally. The Guardians of the Galaxy world is the best world and every new piece of information on the sequel brings us all one step closer to seeing what happens next.

"Ready for another one?" Saldana asks in her tweet. I think the answer is a resounding yes, thank you, more please. At least everyone knows what their plans are for May 5, 2017.