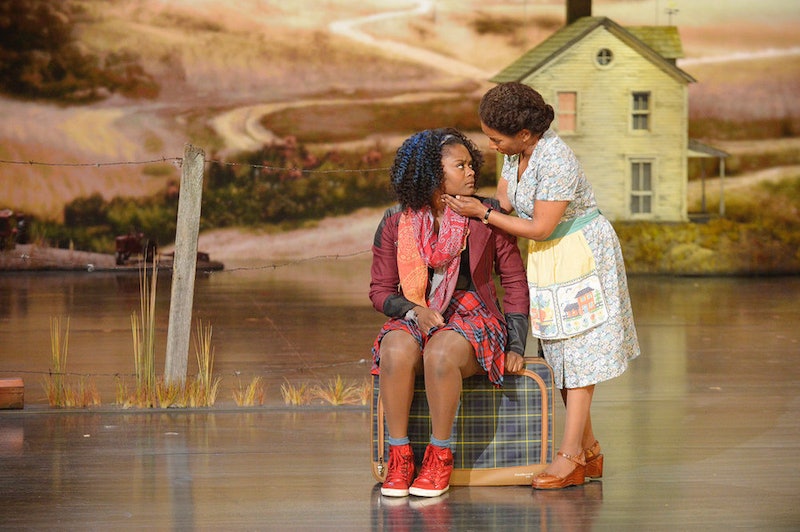 Like Peter Pan Live! before it, NBC's The Wiz Live! is a show based on a tale that's had many incarnations. The musical The Wiz is based on L. Frank Baum's The Wonderful Wizard of Oz, so the plot will be familiar to fans of Oz, but how will The Wiz Live! differ from the original musical? When The Wiz premiered on Broadway in 1975, it was groundbreaking because it told the story of Dorothy Gale from an African-American perspective. The musical ended up taking home seven Tony Awards, including Best Musical, so NBC made a great choice in making this its third live musical. But will The Wiz Live! stay true to the original show that premiered 40 years ago?

In addition to the Broadway version, The Wiz was adapted into a movie musical in 1978 that starred Diana Ross, Michael Jackson, and Richard Pryor. Like the film before it, The Wiz Live! has an all-star cast, including Mary J. Blige, David Alan Grier, Uzo Aduba, Amber Riley, Common, Ne-Yo, and Queen Latifah. (Not to mention newcomer Shanice Williams as Dorothy.) The NBC live musical will even feature the original Dorothy from the Broadway version — Stephanie Mills — as Auntie Em. (In the original musical and the 1978 movie Auntie Em goes by just Aunt Em, but The Wiz Live! uses the Judy Garland-approved "Auntie.")

Mills gave her approval for the Live! version by not only starring in it, but by also telling People, "They haven't changed the story at all. It's the same classic story. It's a family story for everyone, and it's just updated." So while true devotees of the original Broadway musical should expect The Wiz Live! to be a bit more modern than the 1970s version, you shouldn't be disappointed. Of course, with modernization comes change, so when the live musical airs on Thursday, Dec. 3 at 8 p.m., here are the key differences to expect.

The one and only Harvey Fierstein was brought in to write the teleplay for The Wiz Live! and he made some revisions to the original musical book by William F. Brown. "I've loved Wizard of Oz my whole life, but have had questions," Fierstein told BroadwayWorld. "I got to answer all the questions that I had."

Fierstein's version is focused on making Dorothy less of a victim and choosing her own destiny. One of the ways he's attempting to accomplish that is by having the musical start with Dorothy "running away from home trying to get Omaha [sic], where she was actually born," Fierstein told Mashable. If that sounds like too strange of territory, don't worry, since Dorothy is still living with Auntie Em in Kansas, like Baum's version and the Broadway version before it. (The movie version of The Wiz has Dorothy getting swept up in a snowstorm in New York City.)

In his interview with BroadwayWorld, Fierstein said he decided to cut Uncle Henry from The Wiz Live! since he wasn't an essential part of the show. "There's this girl living with her aunt and uncle ... well I killed off the uncle; he doesn't do anything anyway. Do we care about him just sitting on the porch rocking away?" Sorry, Auntie Em!

"Ease on Down the Road" and the other classic Wiz songs are still going to be in the show, but there is a new song written by Ne-Yo (Tin Man), Harvey Mason Jr., Stephen Oremus, and Elijah Kelley (Scarecrow) called "We Got It" that will be the Act I finale of The Wiz Live!. Director Kenny Leon told Playbill , "when the producers approached me — Neil [Meron] and Craig [Zadan] — I already knew that there needed to be a song at the end of the first act that the four friends would do."

In The Wiz, the Wicked Witch of the West goes by the name Evillene and is as scary as ever. But with so much evil comes the opportunity for backstory, so Fierstein also told Playbill that he gave Blige's version of the character an opening scene before she starts singing "Don't Nobody Give Me No Bad News" to help explain her major issue with that pesky H20.

When The Wiz Live! was revealed to be NBC's next live broadcast, the network also announced that Cirque du Soleil would be co-producing the show. Of course, this means that Evillene has the added benefit of the Cirque performers surrounding her. (Cirque's acrobatics will also be featured in other scenes like the tornado.). In The Wiz Live! though, Evillene's minions are going by the name "Winged Warriors," rather than "flying monkeys," like in the original musical and The Wizard of Oz. Leon explained the name change to Playbill.

They [wrote] a lot of things [with] racial connotations, like the crows and the monkeys, because those were political [statements] ... I think our world is different now, so flying monkeys, in my way of thinking, takes you out of the story because you're thinking about something negative. So it's like, 'You've got a bunch of black people, and they're flying around, and you call them monkeys,' and that's not the mess I want to get in, so Harvey came up with the term Winged Warriors.

A small edit for the live NBC production was changing the character of the Gatekeeper to the Bouncer. Fierstein explained to Playbill that the term "gatekeeper" is "not of this generation," so he has Common's character going by the name of Bouncer, which is pretty accurate since he makes it difficult for Dorothy and her gang to enter the gates of the Emerald City.

In every version of The Wizard of Oz ever, the magical wizard has been a "he," including in The Wiz. But The Wiz Live! is changing that up by having Queen Latifah play the part. "Early on, the question [was], 'Who do you think for The Wiz?' And, I just said Queen Latifah. First thing out of my mouth," Leon told Playbill. "I wasn't thinking about gender ... The Wiz can be anything, can do anything." Fierstein also changed the script to help Dorothy relate to the female Wiz by making Latifah's character the magician's assistant instead of the actual magician. "She is a woman escaping the world of men," Fierstein told BroadwayWorld.

These changes, along with the Dorothy's blue streaks in her hair, the updated dance moves (including the hitting the Quan and the Nae Nae, thanks to choreographer Fatima Robinson), and the fact that the show will be the first live entertainment program to be accessible to people with visual disabilities, contribute to The Wiz Live! definitely being modern. And these added touches should help the show appeal to a wide range of audiences — and (cross your fingers) rise above the previous NBC live musical productions.