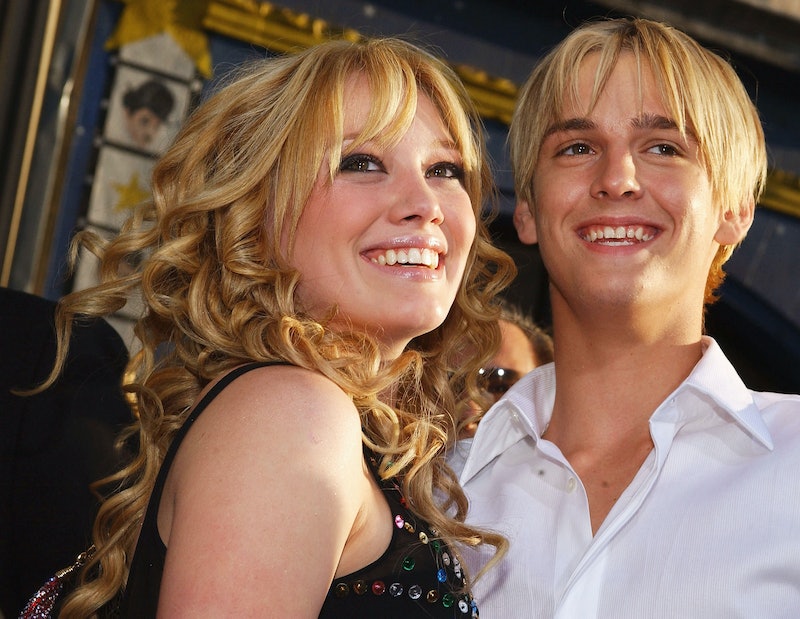 The year was 2003. "Crazy In Love" by Beyoncé and Jay Z hit airwaves (and was probably your favorite song, as it was mine). Britney Spears and Madonna had their life-altering live lip lock on the MTV Video Music Awards. Mean Girls hadn't even hit theaters yet, and we were all still searching for the perfect away message when we stepped away from AIM. It was a beautiful time to be alive. A simpler time. But then, disaster struck. Hilary Duff and Aaron Carter decided to call it quits on their two-year on again, off again relationship, and the world hasn't been the same since.

OK, so their relationship wasn't the greatest. There were all those rumors that Carter had cheated, and when you start dating someone at the tender age of 13, your romance probably isn't destined to last. But if you're like me and weep at the thought of Duff and Carter kissing on that one Christmas episode of Lizzie McGuire because of how much the teenage you loved their relationship, you're not alone. Their love was one of the great ones, and I can't help but wonder if we would all be much happier if they'd never broken up.

So what exactly would happen if Duff and Carter were still together? Pop culture would be forever changed, and for so many reasons.

1. There Would Have Been A Beautiful, Star Studded Wedding

Basically anyone who was anyone in the early 2000s would have been there, and it would have been perfect. I'm talking the entire cast of Lizzie McGuire, Carter's older brother, Nick, and the rest of the Backstreet Boys, and probably even Frankie Muniz, because since he and Duff dated after her breakup with Carter (and that never would've happened), it wouldn't be too weird if he was there as their friend. Can you imagine the photos that would exist from this event?!

2. And Speaking Of Weddings, Hilary Duff Never Would Have Married Mike Comrie

Duff and Comrie were super cute together when they tied the knot in 2010, but ultimately, their relationship didn't last. From what Duff told Cosmo earlier this year, they still get along in order to co-parent their son, but their love just wasn't meant to be. Maybe that's because it was meant to be with Carter? Just saying.

3. And Since There Was No Mike Comrie, There Would Be No Luca

This is heartbreaking to even think about, because Duff's 3-year-old son, Luca, is one of the most adorable toddlers ever, and my favorite part of following the singer/actress on Instagram are all of the ridiculously cute photos she posts of him. The upside? If Carter and Duff were married, they'd have towheaded precious babies of their own, and they'd be really cute, too. But they'd never be Luca!

4. Aaron Carter Never Would Have Had His Twitter Meltdown

Remember that time last year that Carter lamented ever letting Duff go on Twitter? In a world where they're still together, it never would have happened. Is that something any of us is willing to give up? Maybe Carter is, since the whole thing was kind of embarrassing.

5. And Lindsay Lohan & Hilary Duff Never Would Have Feuded

OK, as someone who was not actually in the relationship, I have no idea what actually went on, but it did seem like Duff and Lohan's feud had a lot to do with Carter and Lohan dating. But in an alternate universe where Duff and Carter are still together, the Lohan relationship never would have happened. This is both a great and terrible thing, as it would have saved everyone involved a lot of emotional strife, but would have robbed the rest of us of a lot of delicious drama.

6. And The Entire World Would Be Aaron's Party