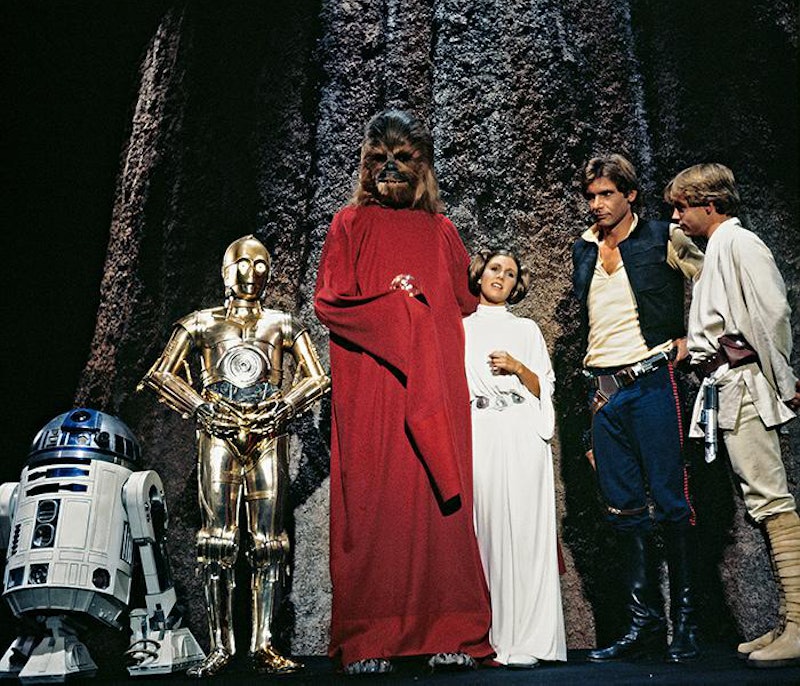 It's December, and you know what that means: Star Wars: The Force Awakens is finally coming to theaters. What, did you think I was going to say Christmas? Look, I love Christmas as much as the next guy, probably more, but this year, Dec. 18 will be better than Christmas. Maybe you think that's blasphemous, but a lot of people are way more excited for the new Star Wars movie this year than they are for Christmas. And can you blame them? While Christmas is certainly the most wonderful time of the year, it's also kind of the worst in some ways. But with Star Wars, I see nothing but positives.

Think about it. When you hear "The Force Awakens", you're likely overcome with excitement, anticipation... and that's it. But when you hear "Christmas", you're filled with excitement and anticipation, sure, but also worry, disappointment, exhaustion, depression — it's a lot. What I'm saying is this: Christmas is great, for sure, and is rightfully the thing to look forward to every December for a great many people. But this year, the release of The Force Awakens on Dec. 18 should be an even more thrilling prospect, and here's why.

I love my family, I do, but there's certainly such a thing of spending too much time with one's family. The only family I need to spend time with on Dec. 18 is the Skywalker family, and it's just for 136 minutes.

I live in Los Angeles. My family lives in Maine. There's no way I'm making the trip home for Christmas without some kind of delay, hassle, and headache. But on Dec. 18, I just need to head to a theater down the block. Thanks, Uber!

I have an 18-year-old nephew to buy a gift for on Christmas. How will I know if what I give him is "on fleek", as the kids say? I won't. But on Dec. 18, the only thing I'll have to buy is my ticket and popcorn. And Goobers, can't forget Goobers.

Every Christmas I get some gifts that I am forced to pretend to like, but on Dec. 18 I'm getting one gift from J.J. Abrams that I'm practically guaranteed to love. And on the off chance that I hate it? Then I can openly vent my frustrations on the internet with no worry of hurting anyone's feelings. Win win!

I gain roughly 45 pounds every Christmas. After all of the egg nog, sugar cookies, and peach blossoms (look 'em up, they're dope), I'm then forced to make my usual New Year's resolution of losing 45 pounds. But on Dec. 18, I'll be able to keep my junk food intake to a minimum — aside from the aforementioned popcorn and Goobers.

I always get nostalgic around Christmas, but it's mostly longing for my lost youth and wishing I still believed in Santa Claus. But on Dec. 18, The Force Awakens is going to recall all of the best moments of the original Star Wars trilogy, filling me with nothing but childlike wonder.

Christmas comes but once a year, but that's still way more frequently than the 32 year wait since Leia and Han Solo were in a movie. Obviously The Force Awakens will be more satisfying than Christmas, because it's so much rarer.

The jolliest person at Christmas isn't Santa Claus, it's my account specialist at American Express. The pressures of Christmas force me to spend way more money than I should every year, but I should be able to keep my spending on Dec. 18 to under 30 bucks. And that's including Goobers!

9. No Getting Drunk in Front of Coworkers

Who hasn't drank too much at their office Christmas party and then had to apologize for their behavior for the rest of the year? There's no reason for me to drink too much and make a fool of myself on Dec. 18, though I definitely might pop a bottle of champagne in celebration after watching the movie event of a generation.

Star Wars did a lot of damage with the prequel movies, but The Force Awakens looks like it will finally right the wrongs of those films and put Star Wars back in the winner's circle where it belongs. Christmas, on the other hand, can't do anything prequel-related other than inspire confused parents to buy Hayden Christensen-themed merchandise for their disappointed children.

Because let's be real: you'll be watching Star Wars in theaters at least twice, and talking about it to all your friends long into the new year.

There you have it, 11 reasons why Dec. 18 is going to be way better than Christmas this year. Now, it's time to look forward to March and Batman v Superman taking over Easter.