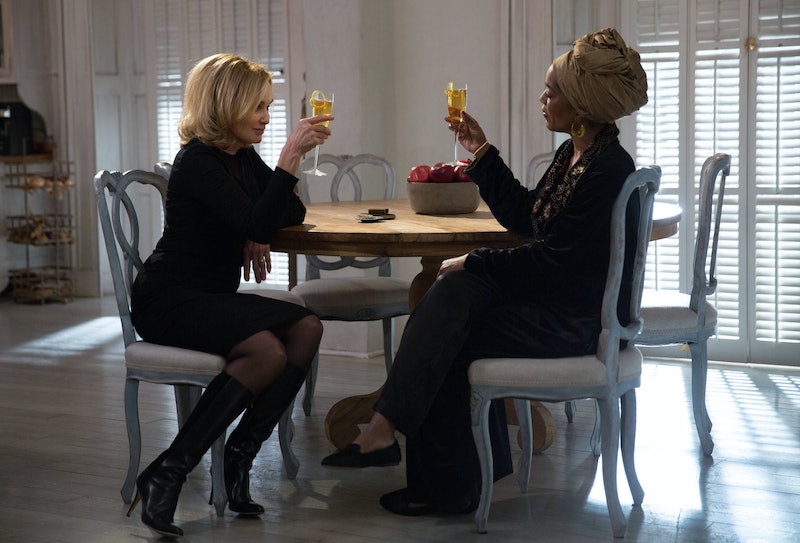 Oh man, and Delphine LaLaurie had been doing so well as a severed head! American Horror Story: Coven ’s resident racist was watching Roots , and The Selma Marches, and presumably learning to curb the hatred and bloodlust that resided so, so deeply in her heart. But it turns out whatever growth she’d achieved over the last 10 episodes was merely a temporary balm on a centuries-festering wound. Once you get a taste for blood, as Delphine did the moment she chopped the head off a chicken (and probably well before)… you don’t exactly lose it. Our collective nightmares tonight will all prominently feature a blood-smeared Kathy Bates yelling “I THINK I’M GON’ LIKE IT HERE!” directly to our face.

In fairness, I think it would be very difficult to undo centuries of mental venom, especially without access to a body. And when I had that body restored to me — by Queenie, offscreen — I don’t believe it’s at that moment that I would suddenly appreciate life, let bygones be bygones. It’s at that moment that I’d probably go NUTS and start plotting my revenge against the people who wronged me. Not to condone horrific sadism, racism, or being super-shitty to your daughters! (Or killing the gardener she hung up and tortured. That’s just uncalled for.)

One of AHS’s favorite moves — and one of mine, too — is pairing two previously disconnected characters together and seeing what comes out of it. Cordelia and Myrtle, and their sweet mother/adopted daughter relationship. Fiona and Laveau, the grand dames of getting shit done. MISTY AND STEVIE NICKS. Tonight saw one of the more… unusual pairings (which is saying a lot on this show) when Delphine teamed up with the ghost of Spalding in an effort to finally wipe Marie Laveau clean from the earth. Although in hindsight, the pairing makes more sense than you might think at first. They’re both servants at Robichaux’s School for Girls. They both wear old-school servants’ garb (that is, when one of them isn’t dressed like the creepiest-ever American Girl Doll). Both of them have been killed, sort of, or at least been subject to attempted murder. Really, these two should be best friends!

Spalding, the ghost trickster, promised Delphine that for the right price… he could produce the magic that might take down Laveau. Eager to rid herself of the woman who’d cursed her to eternal life, and exact some revenge in the process, Delphine agreed — and produced for Spalding some limited edition doll from the late 1800s, a true collectors item. With original dress! And then Spalding produced what he had promised, and what Delphine could have had no idea was utter BS: a pack of Benadryl. The bane of voodoo priestesses everywhere! Fast-forward to the end of the episode, when Delphine learned that Benadryl does not kill witches, merely enrages them. But there, with a vase broken over Laveau’s head, is Spalding — and the assurance that so long as they can bury the woman deep, deep underground… they’ll be okay.

Other happy endings were in order too, tonight!

Obviously everything will fall to shit next week but for the time-being — no one’s doing that bad!

More like this
The ‘Squid Game’ Season 2 Renewal Teases A Creepy New Figure & A Return
By Brian Anthony Hernandez and Bustle Editors
“The Door Is Always Open” For Another 'Breaking Bad' Spin-Off, Says AMC Boss
By El Hunt
Emma Thompson, Lashana Lynch, & Stephen Graham Lead Netflix’s 'Matilda'
By Sophie McEvoy
Why You Loved 'One Tree Hill' So Much — And Still Do
By Sabienna Bowman and Radhika Menon
Get Even More From Bustle — Sign Up For The Newsletter