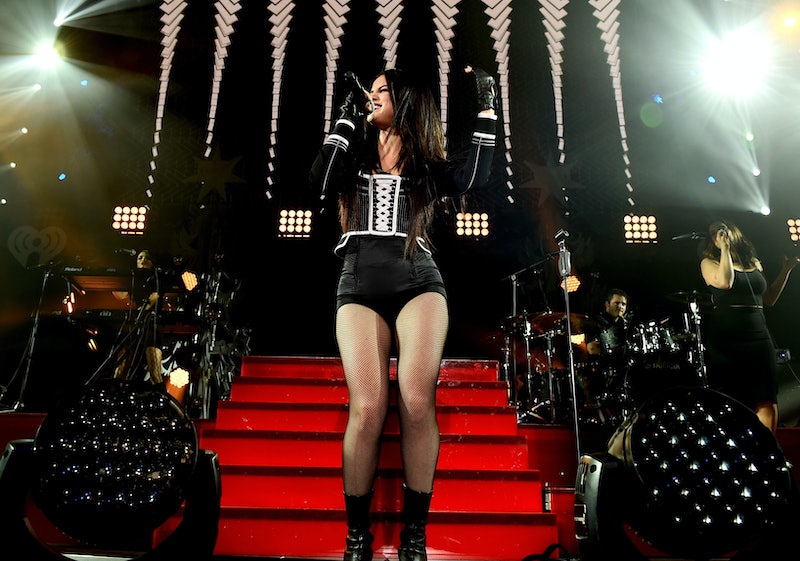 Selena Gomez has had a killer 2015. With the release of her second solo album, Revival, and two number one hits — "Same Old Love" and "Good For You" — Gomez made 2015 the year she became a true pop star. But, for all her accomplishments in 2015, 2016 is shaping up to be even better for the singer and actress. With only a few weeks left in the year, she isn't slowing down. Instead, fans can catch Selena Gomez in a brief cameo in The Big Short , a movie generating serious Oscar buzz starring Christian Bale, Ryan Gosling, and Steve Carell, opening on Dec. 23. Gomez only appears briefly in the film, but her cameo in The Big Short proves 2016 is going to be a huge year for Selena Gomez.

The Big Short, a movie about the housing bubble and financial crisis of 2008, might not sound like your typical Selena Gomez movie, but, that's exactly why director Adam McKay hired her. Gomez is just one of the celebrity cameos featured in The Big Short used to explain "boring" financial concepts to help audiences understand what the movie is about. Gomez, for example, is tasked with explaining a synthetic C.D.O. — not exactly what you'd expect from the woman whose last film credit was Hotel Transylvania 2. With The Big Short, Gomez is proving that her film career is following in the footsteps of her music by moving in a more mature direction.

Though the former Disney star only cut her ties with the kid-friendly network in 2013, after the TV movie The Wizards Return: Alex vs. Alex, Gomez made the move to more adult work in 2012's Spring Breakers. Since then, however, Gomez's film career has fizzled with a string of box office disappointments (Getaway) and indie films that were barely released (Rudderless and Behaving Badly). Now, Gomez's cameo in The Big Short is reviving her career on the big screen in a major way just in time for 2016, which will see the release of three major movies for Gomez. In the new year, fans will get to see Gomez in Neighbors 2: Sorority Rising alongside Seth Rogen and fellow former Disney star Zac Efron, in The Revised Fundamentals of Caregiving with Paul Rudd, and in In Dubious Battle, a film directed by James Franco and co-starring Josh Hutcherson.

As if starring in three films in one year wasn't enough, 2016 will also mark the year of Gomez's first World Tour since 2013. Gomez's Revival tour won't start until May of 2016, but there's no doubt it's going to be a game changer for the singer, who is currently gearing up for the release of her next big hit, "Hands To Myself." Fans will be able to watch Gomez in concert before she kicks off her tour when she performs during the Victoria's Secret Fashion Show airing Tuesday. And, with an album full of hits just waiting to be released, Gomez has more than enough material to keep Revival front and center as 2016 begins.

There's little doubt that 2016 will be a great year for Selena Gomez professionally, but it's also shaping up to be a big year for Gomez in general. In 2015, Gomez not only managed to shed her kid star persona with Revival, she also kicked her identifier as "Justin Bieber's girlfriend" to the curb and embraced a body-positive attitude. No longer in the tabloids for rumored feuds with fellow Disney starlets or her on-and-off love affair with the Biebs, Gomez is owning her celebrity in a way she never has before. Nowhere is this more evident than in Gomez's brave decision to reveal that she suffers from Lupus. In October, Gomez opened up for the first time about her diagnosis, explaining that she took time off in 2014 to focus on her health. "I waited for the right time to talk about it because I am in a great place and I'm very healthy. I'm not trying to be loud about it: It was time to use my platform to help," Gomez told Billboard.

It's this down-to-earth attitude and refreshing honesty that has Gomez sailing straight into 2016 as one of the strongest pop stars of the new year. Keep doing you, Selena, we love you for it.

More like this
Selena Gomez Explained Why A Past Album Cover Made Her Feel “Really Ashamed”
By Grace Wehniainen
Selena Gomez Is Fine Being Single, But She Still Manifested Romance On 'SNL'
By Martha Sorren, Jake Viswanath and Jack Irvin
Photos Of The 'Elvis' Cast vs. Their IRL Counterparts Will Have You All Shook Up
By Grace Wehniainen
Taylor Swift's “Carolina” Theme For 'Where The Crawdads Sing' Soundtrack Is Here
By Jake Viswanath
Get Even More From Bustle — Sign Up For The Newsletter