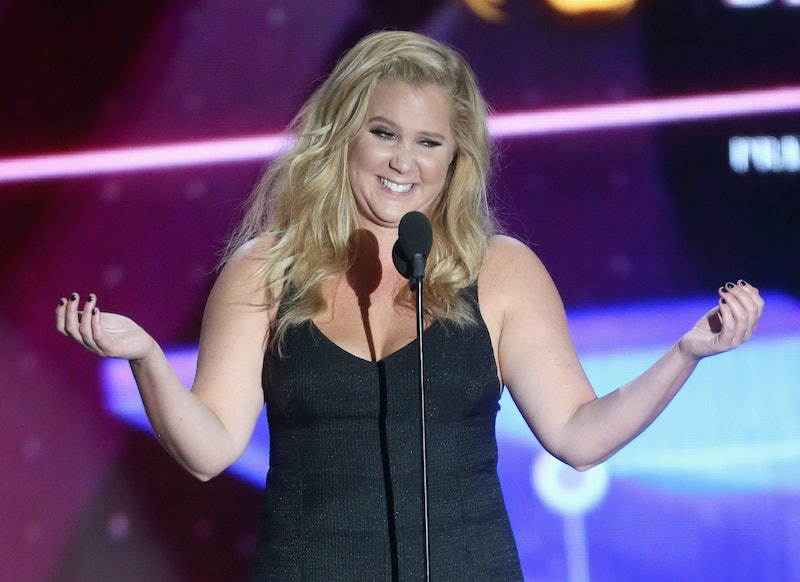 On Wednesday, People magazine named Amy Schumer as one of their most intriguing people of 2015, and you'd be hard pressed to find a better option. After all, Schumer has been a stand-up comic since 2004, and had a slow, steady rise to the career we know so much about today over the course of nearly a decade. She's worked hard to make a name for herself, and she shows no signs of slowing down.

In 2015, she starred in her first leading role in the summer smash Trainwreck (and also showed off her amazing dance moves to "Uptown Girl" both in the movie and on Billy Joel's piano), she scored an Emmy in September for her Comedy Central hit Inside Amy Schumer, and she hosted Saturday Night Live. Oh, and not to mention, she had her very own HBO special Amy Schumer Live at the Apollo in October, she's the first comedian to ever open for Madonna on tour, and she hosted the 2015 MTV Movie Awards. (Seriously, did Schumer actually get any sleep this year? Can someone check on that, please?)

But even more than all of those unbelievable accomplishments, she proved she's an advocate for gun control after a theater shooting in Lafayette, La. killed two people during a screening of Trainwreck. As the rest of us watched the news in horror, Schumer decided to use her quickly growing fame to do better and to help others by calling out for stricter gun control laws.

Amy Schumer is, far and away, one of the most intriguing people of this year, and the cool thing is, I know there's so much more in store for her in 2016. The year hasn't begun yet, but here are all the exciting things she's already got on her plate (and for her sake, I'm hoping a long tropical vacation with a cocktail and a beach read is planned, too!).

1. Inside Amy Schumer Will Have A Fourth Season

Ratings for her Comedy Central show have soared as her star has risen, and Comedy Central renewed the series for a fourth season before the third even aired (!!) — is it too early to set my DVR? (Note: the season will premiere sometime in April.)

Since what the world needs is more Schumer on TV, she's already signed on for an as-yet-untitled FOX comedy with the director of The Night Before, Jonathan Levine. Few details have been released at this point, but I can't help but wonder who could play Schumer's mom in the series. My vote is for Bette Midler!

It's rumored that her book deal was nabbed at $8 to $10 million and will be a collection of essays chronicling her childhood, family life, career in comedy, and aspirations for the future. I, for one, can't wait to snag a copy!

4. She Is Writing A Screenplay With Jennifer Lawrence

When Schumer teamed up with J. Law, they gave true meaning to the word #squadgoals (sorry, Taylor Swift!) and showed that the only thing better than one smart funny lady is two smart funny ladies hanging out together on a boat. There's literally nothing I've wanted more this year than to hang out with the two of them, so the thought of a movie with Lawrence and Schumer at the helm is basically a dream come true. We still don't know much about the project, other than both ladies will be writing AND starring in it as sisters, but it's pretty much a guaranteed hit in the making.

In June of next year, Schumer will be the first female comedian to ever headline Madison Square Garden. Who run the world? If you thought it was Beyoncé, I'm here to tell you, it's actually Amy Schumer.

Schumer struck a pose for the 2016 Pirelli Calendar, shot by famed photographer Annie Leibovitz. The shot was lauded by basically everyone who saw it, and showed that body positivity is waaaay overdue.

I'm convinced there's nothing this girl can't do.

More like this
Sandra Bullock, Girlboss Extraordinaire
By Matt Harkins & Viviana Olen
Danny Boyle Knows Exactly Who He Wants To Be The Next James Bond
By Sam Ramsden
Lisa Marie Presley Reviewed Baz Luhrmann’s ‘Elvis’ Movie On Twitter
By Grace Wehniainen
Elizabeth Olsen's Chris Evans Friendship Update Was Accidentally Hilarious
By Grace Wehniainen
Get Even More From Bustle — Sign Up For The Newsletter