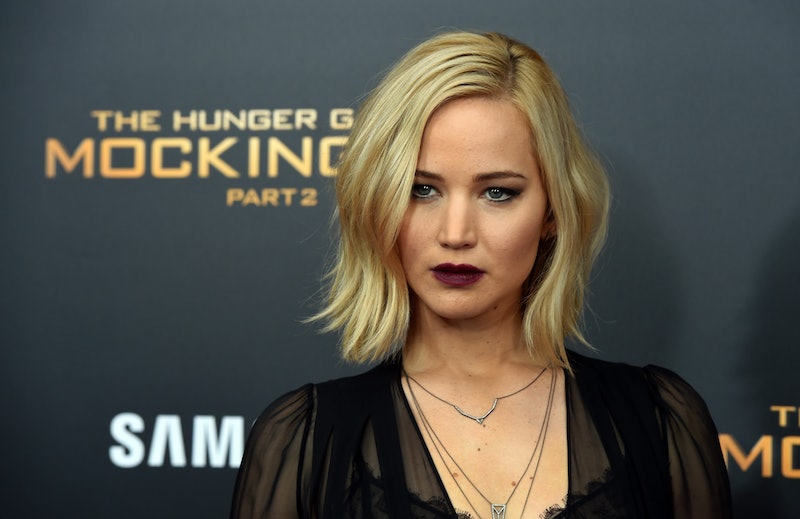 Well, well, well, if it isn't J. Law once again! Jennifer Lawrence is nominated for a Best Actress Golden Globe in a motion picture musical or comedy for her lead role of Joy Mangano in the film Joy. If you know Lawrence's award history, you know this isn't exactly a surprise. There's no denying that this actress is talented, and we could have all guessed J. Law's performance in Joy would end up landing her a nomination. So, there's really only one question left to ask: what will Lawrence wear to the Golden Globes?

Yes, J. Law is a great actress, but the woman has also got some major style. While watching the actual Golden Globes ceremony and seeing which artists walk away with awards is great, the red carpet is where the fashion and style action is. And if there's one person in Hollywood who consistently slays in unexpectedly gorgeous ensembles and beyond beautiful looks, it's Lawrence.

That being said, we know Lawrence recently switched stylists and has revamped her look since then. And while she absolutely killed the style game these last few months for industry appearances promoting Joy and The Hunger Games: Mockingjay, Part 2, we have yet to see how her new look will go over during awards season.

But if history really does repeat itself, then we can accurately decipher what J. Law's future Golden Globes ensemble may be based on looks in her past. Let's allow some of her best red carpet moments to guide us in predicting her outfit for the upcoming GG ceremony.

If this year's Golden Globes ensemble is anything like last year's, Lawrence may opt for a strapless gown. Back in 2014, when she won the Best Supporting Actress In A Motion Picture award, Lawrence dazzled in this white number with black detailing.

The year before that, Lawrence wore another strapless gown, this time in a crimson hue, to accept the Best Actress in a Motion Picture Musical Or Comedy award for Silver Linings Playbook.

And remember this strapless dress she wore to the 2013 Academy Awards to accept the Best Actress award for the same role? Yeah, I'm thinking strapless may be a good bet. This style is also seemingly a good luck charm, too.

Or maybe she'll go a little darker and vamp it up in a sheer, black ensemble like she did recently to promote Mockingjay Part 2. Personally, I love this look on J. Law.

Perhaps she'll go with a sparkling column dress? This gorgeous piece she wore to the 2014 SAG awards was a knock-out.

Her most recent Academy Award get up in 2014 was also a stunner. How good does red look on her glowing skin?

I know she's worn them more than a couple of times, but there's no denying Lawrence can work a strapless white gown like it's nobody's business. Her ensemble at the 2013 BAFTAs was undeniably pretty.

Sometimes it's nice to see her up the allure factor like she did in this Ralph Lauren Collection gown promoting Mockingjay Part 2.

Her chic bob haircut is also great, so hopefully that will be making an appearance at the upcoming Golden Globes ceremony.

Or maybe, she'll go for something unexpected yet totally chic, like this vest dress.

At this point I'm convinced Lawrence could wear a potato sack and still look gorgeous. But of course, she wouldn't do that. Maybe she'll wear a purple, cut-out gown, because, obviously, that's a little more appropriate than a potato sack.

For the 2016 Golden Globes, will Lawrence channel her feminine side with a chic, classic dress silhouette? Or will she bring sexy back with alluring cut-outs and body con fabric? My guess is as good as any, but since Lawrence is no stranger to the Golden Globes red carpet there's no doubt people will be looking to her to top the best dressed list. With her track record, I know she's going to slay it.