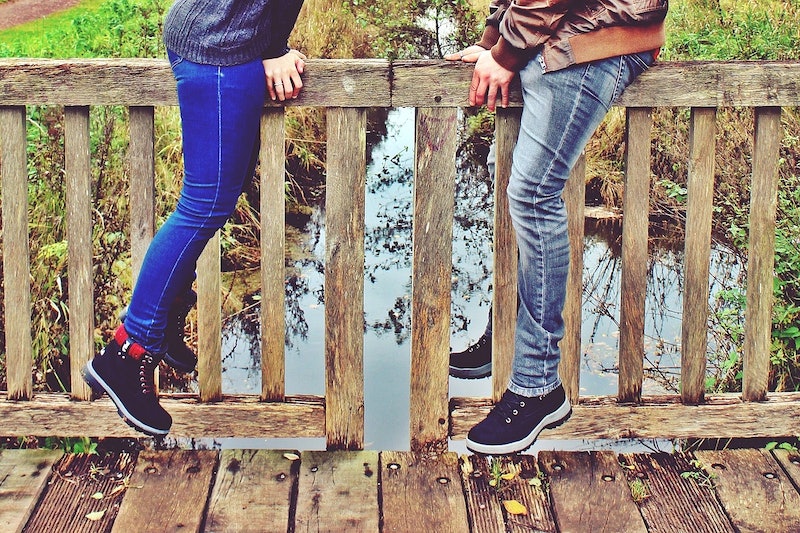 When you first start dating someone, it can be magical. There are butterflies with every kiss, goosebumps with every touch, and being apart from them feels like hell on earth. But while that may be true, there’s also the other side, like figuring out when you’re supposed to reveal your past in new relationships — if at all. Many of us have little bits that we fear might send this fantastic new person running for the hills.

Because it’s definitely not easy to spill your guts about some of the most personal and intimate details of your life, dating site Zoosk, decided to do some investigating. With the beginning of the New Year being a huge time for online dating sites, it only made sense that singles should get some incite into exactly when it’s OK to reveal touchy subjects. For example, if you’ve cheated on a partner in your past, exactly when should you drop that bomb? Should you? According to the 5,000 members who were surveyed, they want that information front and center, with 33 percent needing to know either on or immediately following the very first date. However, 24 percent never, ever want to know about a new partner’s cheating past. I guess ignorance is bliss when it comes to this subject.

But cheating history is just the beginning. Here are nine other things to know about when you should reveal other less than romantic details.

According to the survey, more men than women can do without ever hearing about how many people you’ve had sex with in your life, which is awesome because your number doesn't matter! For 52 percent of men and 41 percent of women, the topic doesn’t need to be discussed. Unless there’s an STI diagnosis that affects the relationship, it’s probably best to keep the past in the past.

2. Less Than Half Are OK With Discussing Past Relationships A Few Weeks Into Dating

Well, at some point, you’re going to have to talk about your relationship past, it’s probably not fodder for a first date, or even a second or third. It seems like no one wants to be trying to enjoy their Oysters Rockefeller while listening to the tearful details of someone’s past relationship and just how messy the breakup was. Instead, 46 percent of people would rather wait a few weeks before that conversation is brought to the table.

3. Most People Don't Want To Bring Up Their Sexual Preferences During A First Date

Unless you meet on FetLife, where kinky sexual predilections are all out there in the open, not many people want to address that subject at first contact. Whether it’s a fetish or even the simple fact that they’re still a virgin, only 32 percent of men and 28 percent of women would divulge that information so early.

4. Less Than 10 Percent Want To Know About Finances Up Front

Although someone’s financial standing might not be all that important in the beginning, eight percent of people want to know right away, as in probably before you even finish your appetizer on a first date. On the flip side, 32 percent of singles think that at least within the first few weeks, especially if you see the relationship evolving, financial situations should be shared, including debt, salary, savings, and all the rest of it.

5. Mentioning You’re Rich In First Online Messages Will Decrease Your Chance Of A Response

Zoosk found that certain words in initial messages can decrease response rates, and “rich” happens to be one of them. Other words that just might be a dealbeaker before there’s even a deal on the table are “vegetarian” and “virgin.”

6. Pets Are Likely To Increase Your Response Rate

According to Zoosk, words that will increase your chances at a response, in addition to “pets,” are “vegan” and “allergies.” Sounds to me like some lucky people like to bond over how cheese is the worst and their peanut allergy bums out entire planes full of people every time they fly.

7. Most People Share If They’re Seeing Other People On A First Date

If you’re online dating, you’re essentially playing the field. You’re dating as many interesting people as you can in the hopes that you can finally narrow it down to that one special someone. So it only makes sense that you could be on a first date with someone and had just had a first date with someone else the night before. For those who are seeing other people, 70 percent of men and 62 percent of women would share that information either on or immediately following the first date, like perhaps, before the second date.

8. More Men Than Women Want To Discuss Exclusivity Within A Few Dates

Say what? I'm guessing these men don't live in New York! But I digress. According to Zoosk’s survey, almost half of men want to define their relationship after just a few dates. In contrast, only one-third of women are willing to go that route.

9. Most Singles Want To Talk About Marriage After Six Months Of Dating

For 56 percent of men and 54 percent of women, the whole marriage talk should be discussed after at least six months of dating. While this doesn’t mean that anyone is getting on their knee and proposing, most singles think this is the appropriate time to see if the other person is even interested in the whole idea of marriage later on or not.

Want more of Bustle's Sex and Relationships coverage? Check out our video on sex positions on small penises:

More like this
The Best Time To Date After A Breakup, According To Experts
By Bustle Editors
Are Virgo & Capricorn Compatible In A Relationship?
By Kristine Fellizar
7 Women Share Their Best Orgasm Stories
By Lexi Inks
How To Use Astrology In Dating, According To The AstroTwins
By Brittany Beringer
Get Even More From Bustle — Sign Up For The Newsletter