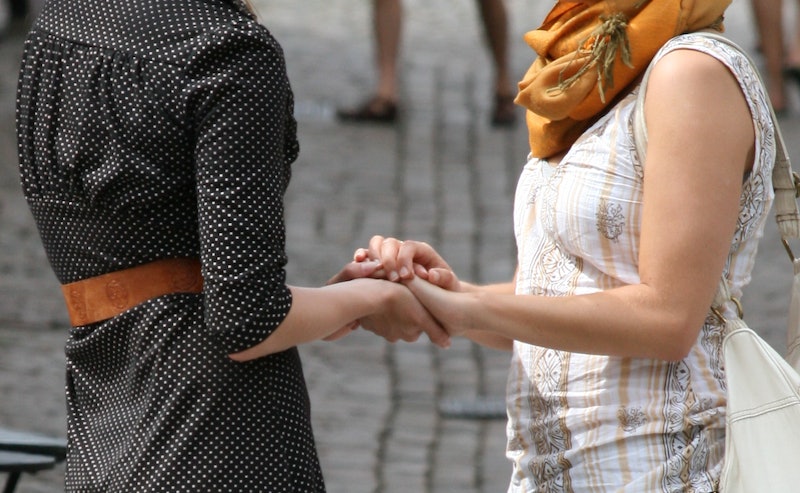 In order for feminism to truly benefit all women, there are all kinds of lessons white feminists need to learn — and I say this as a white feminist who has had to learn many of these lessons myself. In the past, feminism has traditionally been dominated by the interests of those who fit the typical societal ideal — in other words, by white, straight, cisgender women. As a result, feminism has historically diminished and outright ignored the struggles of women of color, simply because they don't align with what white women experience.

Although women of color have been making their voices heard more often in recent decades, the fact remains that this "white feminism" is all too common, even today. Take, for example, the Nicki Minaj-Taylor Swift kerfuffle earlier this year, during which Swift dismissed Minaj's remarks regarding racism in the music industry. (She later apologized.) Or the time Miley Cyrus claimed those same remarks were just Minaj pulling the race card. Or Patricia Arquette's 2015 Oscar speech about equal pay, which erased women of color entirely. The list goes on and on.

Not every feminist-who-is-white is a "white feminist," but even the most well-intentioned among us can slip up sometimes. Let's take a look at some lessons white feminists should keep in mind, so we can make the fight for gender equality actually equal. After all, it's the holiday season. Why not give the gift of inclusivity?

1. Don't Dismiss Something Just Because You Haven't Experienced It

In the same way that a man can go through life without noticing how the patriarchy benefits him while oppressing women, white women can easily ignore the advantages they receive based on race. Women of color have different experiences than white women, period. A white woman doesn't go through the same things, but that doesn't mean they don't exist.

2. There's No Such Thing As "Pulling The Race Card"

All too often, when a person of color points out an instance of racism, they're accused of pulling the "race card," aka unnecessarily making an issue about race. This is often because a white person doesn't pay attention to how ethnicity affects the situation — white privilege, after all, is often invisible to the people it benefits. However, ethnicity inevitably colors every interaction, even if you might not see how. Therefore, there is no "race card." Instead, there are just people of color speaking out about how they are affected by the system.

As Charles M. Blow wrote for the New York Times earlier this year, "Living in a society still replete with racial bias can make one hypersensitive, to the point of seeing it even when it isn’t there. But this to me isn’t evidence of malicious intent, but rather the manifestation of chronic injury."

Human beings are made up of a series of interconnected identities, from ethnicity to birth order to sexuality to economic class. It's impossible to untangle these identities, and as a result, they intersect to shape every aspect of our lives. A Latina woman, for instance, faces disadvantages from racism and sexism, whereas a white woman only experiences disadvantages based on her gender. This doesn't downplay the effect sexism has on the latter's life, but it's important to acknowledge that different identities affect us, well, differently.

Don't try and say ethnicity "doesn't matter," or that you've never noticed its effects. It's insulting, and it diminishes the disadvantages people of color face. James Baldwin once wrote, "Being white means never having to think about it," and that's exactly what makes it so important to acknowledge your privilege.

Once you've acknowledged your privilege, the next step is using it to help others. In a perfect world, everyone would be on equal footing, but the reality is that not all voices are heard. White feminists are afforded advantages and opportunities that women of color simply aren't. Rather than try to downplay it, use that platform to help other women make themselves known.