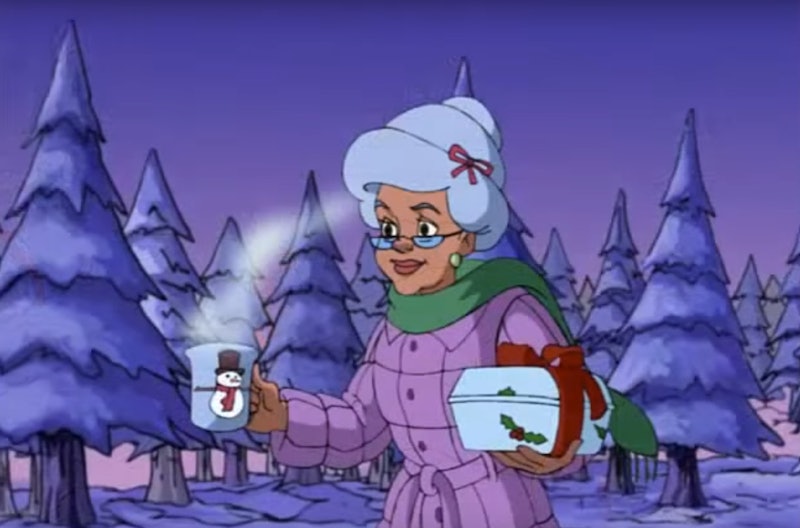 Grandma Got Run Over By A Reindeer -- Animated TV Special/YouTube
By Julie Sprankles
Dec. 11, 2015

Perhaps more than any other time of the year, the holidays make you think of days gone by. I can't count the number of times my family and I have huddled around a box of old family photos, laughing at memories from holidays in the past. And in doing so, it is always decidedly apparent that the holidays in the '90s were different than the holidays today. Obviously, right? There's a reason '90s kids are so nostalgic about the decade we grew up in — times have changed since then.

It's about much more than saying goodbye to some of our favorite stuff (RIP Pokemon and Tamagotchi). Admittedly, we do miss those things; but the shift also has a lot to do with changing fads in fashion, technology and, well, lifestyle. If I zipped back in time now to visit my '90s self over the holidays, I'm not sure the me of today would know what to do with herself. Or what to say to the sweater-vest wearing, Ecto-Cooler swigging kid I was back then cruising — Oh, who am I kidding? Crashing! — around the driveway in the rollerblades my grandparents got me.

So, in ode to those rad memories of yore, let's take a look at eight ways the holidays in the '90s were different.

1. Pop Stars Really Got Into The Holiday Spirit

No one — and I repeat, no one — was hollier or jollier during the holiday season than '90s pop stars. Sure, pop stars today probably work a few holiday songs into their sets during this season. But in the '90s, pop's major players like NSYNC, Christina Aguilera, and the Spice Girls weren't afraid to embrace the campiness of the holidays by decking out in Santa suits and string lights. And let's not forget Mariah Carey, who's basically the poster child for the '90s holiday season.

Well, this is awkward. Today, it's not uncommon to hit up at least one tacky holiday sweater party as part of a comical rip on times past. The '90s were those comical times past. We rocked crocheted jingle sweaters and denim vests embroidered with holly — and we weren't joking. That was just the way we wore our holiday spirit. Paired with stirrup pants, naturally.

3. Grandma Got Run Over By A Reindeer

In total fairness, the novelty song "Grandma Got Run Over By a Reindeer" was actually first written and recorded in the late '70s. But it became a true holiday classic in the '90s, when it got the remix treatment and charted at #64 and #48 in '90 and '99, respectively. It's fallen out of vogue recently (because let's face it: it's kind of a weird song), but back then, you couldn't shake a jingle bell without hitting someone singing this song, much to the chagrin of grandparents everywhere.

Holiday catalogs? What are those? Today's tech-savvy youth don't bother to flip through these paper anachronisms, but back in the day, the holiday sun rose and set on The Warner Bros. Collection, Toys 'R' Us, and Sears' holiday catalogs. Circling hundreds of items in wild abandon felt so right.

And not just any cereal — '90s classics that filled your belly and your soul, like Christmas Cookie Crisp and Christmas Crunch. Alas, even though some of these extinct favorites have seen reincarnations, they aren't the same as the good ol' days when each artificially colored bite was filled with a special sort of delicious.

I'm all for some Sinatra during the holidays, but who doesn't miss the holiday seasons when we sat around the tree listening to TLC's Sleigh Ride album, Hanson's Snowed In , or watching Phoebe Buffet serenade the people of Central Perk as only she could do? Oh, and we can't forget belting out every word to the Disney sing-a-long version of "Twelve Days of Christmas."

7. Kevin McCallister Made Us Want To Spend The Holidays in New York

In 1992, everyone's favorite holiday problem child, Kevin McCallister managed to get lost in the Big Apple during the holidays in Home Alone 2. And, in watching him fight off the bumbling Sticky Bandits and use his trusty Talkboy at the Plaza Hotel, he inspired countless holiday wish list requests to spend the holidays in NYC. Because, let's be honest, we all wanted to know if Duncan's Toy Chest was a real place.

Save the occasional cell phones — which were most certainly not the sophisticated smart phones of today — and a dial-up computer, the holidays weren't monopolized by technology. We were more likely to spend our time together staring at the glow of a fire in the hearth than at the glow of blue screens. Then again, you'd be hard pressed to distract a '90s kid from holiday TV specials with the Tanners or the Matthews and Mr. Feeny.

More like this
Remember These Ancient Pieces Of '90s Tech?
By Lucia Peters and Emma Carey
11 Trends From The ‘90s That Made You Feel So Cool
By Julie Sprankles
25 Quotes About Love To Share During Pride Month 2022
By Madeleine Aggeler and Emma Garza
8 Creepy Things You Probably Did In The '90s
By Julie Sprankles
Get Even More From Bustle — Sign Up For The Newsletter