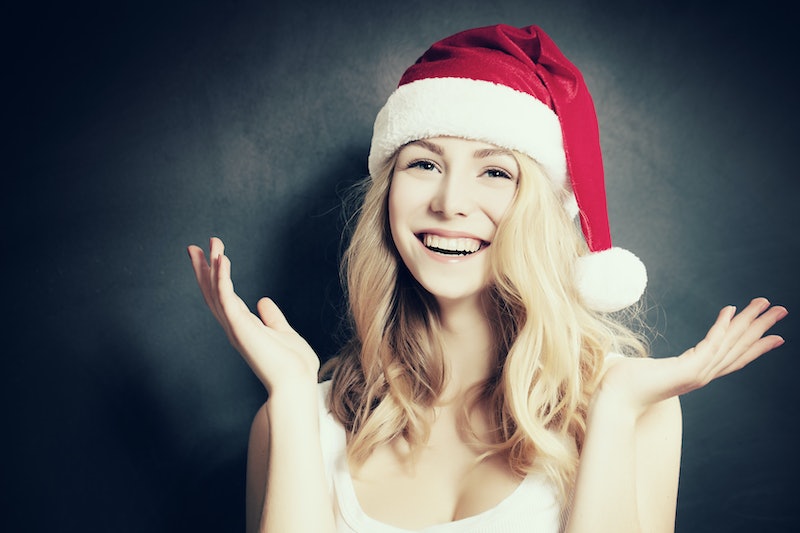 ‘Tis the season to be single! And actually, being single over the holidays is trendy, too, says a study of Facebook profiles that found two weeks before Christmas is the most popular time of year that people break up. A few years ago, a friend of mine proved this theory when she and her boyfriend broke up right before Christmas. She contemplated taking him back “just to get me through New Year’s,” she said. I, on the other hand, thought, “Finally!” (He was controlling, had a bad temper, and had said he never wanted to marry her, which is something she wanted.)

Whereas she thought the holidays would be miserable without him, I thought the opposite: that it was a great opportunity to have more girls’ nights and go to holiday events where she could meet new people, particularly people who didn’t track her every move and would make her feel better about herself, not worse. I told her it’s better to settle on finding the somebody versus just anybody (like him).

Even though it’s "Cuffing Season", that time of year when people pair up and do a lot of staying in, because, it’s cold out there (wink), other people prefer to be single during the holidays. And I think there’s many benefits to it.

1. There’s Lots Of Mistletoe Out There

Yep, there’s a lot of mistletoe out there, especially at all the Christmas and holiday parties you’ll go to. Similarly, there are plenty other single people out there, too — it’s not just you! Don’t just go to your friends’ holiday parties, but go to their friends’ parties, as well, for it’s always good to meet new people.

Even if you show up alone — believe me, I know it’s tough — it’s a benefit, for it forces you to meet people you wouldn't otherwise meet. (If it's an Ugly Sweater Party, you can bond over that. If not, you'll think of something!) Whether you meet someone at the drinks table, the host introduces you to people, or you just randomly walk up and introduce yourself to someone, anyone, it’s all about being there. No one is going to magically appear at your house. (I guess with Tinder and other apps, they theoretically can, but that defeats the purpose of going out and potentially meeting lots and lots of people and potential dates.)

Meetup.com is another great way to find holiday events, some for “singles,” some masked as “happy hour” or “bowling” nights.

If you’re seeing someone but it’s not yet official, and you’re not sure you want it to be, go to those parties alone. (Plus, you may not want to introduce people to someone who only “may” be your girlfriend or boyfriend one day.) A single guy friend of mine used to say he never misses a social engagement, because “you never know.” (He is now happily married to someone from one of those parties he wanted to avoid.) If you’re into the person you’re dating, by all means, take them along, but if it’s just so-so, you’re still single. So, go mingle.

For most holiday parties, people dress up (whether it's in nice clothes or ugly sweaters) and tend to put in more effort than they do to just lounge around the house all day. Plus, red seems to be the most popular color to wear in December, and it's actually the color that makes you most sexually attractive.

4. You Don't Have To Stress Over A Gift

That’s right, one less Christmas or Hanukkah present to buy this year, since you’re single. Plus, you won’t have to break the bank getting his or her family and nieces and nephews gifts, too. More presents for yourself, or, better yet, get some for those in need.

5. You Can Go Wherever You Want To Go

There’s no plane-hopping and splitting holiday time off between your family’s place in the Midwest and his or hers on the East Coast. That’s right — you can do whatever you want and go wherever you want. A few years ago when I was single and getting over a breakup in December, I watched The Holiday. (On repeat.) You know, that movie with Cameron Diaz and Kate Winslet where they trade houses (L.A. and a small town in England, respectively) after they both go through bad breakups. They spend Christmas alone, trying to recover and swear off love. I watched that movie one too many times, because a week before Christmas, I suddenly found myself buying a plane ticket to London for the holidays. (Granted, I had family there, but still.)

It ended up being a great way to date myself and meet lots of interesting people along the way. I also met other single people traveling their sadness away — it was like an impromptu support group — and we created new holiday memories by sightseeing and watching bad karaoke in London.

6. No One Will Question Your Future With So-And-So

Since there is no so-and-so, no one (I mean you, family members) will ask you when you two are getting engaged, or married, or are having a baby. Hopefully, they’ll know better than to bring up his or her name, but you can quickly put a stop to that with more spiked eggnog — for them and for you.

7. You Don't Have To Impress Anyone

Instead of freaking out over meeting the parents or worrying that you didn't get your S.O.'s mom a good gift this year, you can sit back and relax with family and friends who know (and love) the amazing person you are.

8. You Can Start The New Year Fresh

Perhaps 2015 wasn’t the best year for you dating-wise. Well, guess what? The new year is just around the corner, which means new dates, new social circles — basically, a new you. In fact, Jan. 5 is the day most people join Match. “Match found that 51 percent of singles' New Year's resolutions will be to socialize more and focus on finding that special someone, making the desire to connect with someone a driving force for singles to get online after the holidays,” Match president Amarnath Thombre said to TODAY.com.

How About We agrees and says it’s membership goes up 40 percent in January and February, citing the commonality of cold-weather dates like ice skating. So, here's to you and relishing being single... before you get sucked in by all the dating sites in the new year.