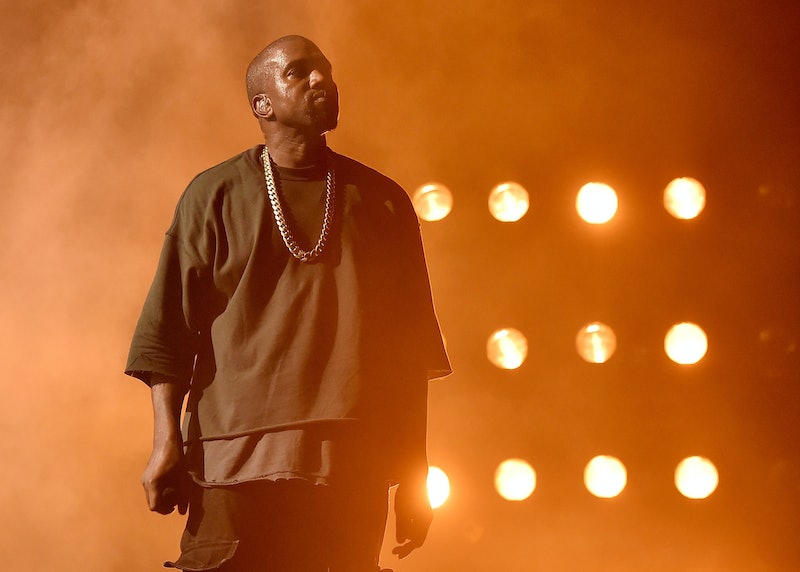 Yeezus has risen, and he is woke. On Saturday night, fans found out from the father of Saint West himself that the question of when Kanye West's new album will come out might be answered soon. If you hear that, it's the sound of screams and cheers from around the globe. The rapper (and hopeful presidential candidate) finally has new music coming fans' way, and I, for one, could not be more excited. But when exactly will the new record, called SWISH, be released?

It's still unclear, but from his tweets on Saturday, West seems to have implied that it's coming really, really soon. When it does drop, it'll be the climax to a fantastic year for the rapper. His Fashion Week debut was a massive success, and Yeezys are selling out everywhere online, with fans everywhere trying to unleash their inner Kanyes and get their hands on a pair. And the icing on the cake, of course, is the fact that West's wife, Kim Kardashian, just gave birth to their first son, Saint. The Chainsmokers sang it first: I wanna be like Kanye. The Atlanta born and bred rapper is on top of the world right now, and what better way to celebrate all of these accomplishments than with the release of a new album? The "Mercy" rapper definitely understands this, and he was pretty blunt in his Twitter announcement.

Wait, album and collection? People, we are in for a treat. Don't rush it, though:

I don't blame him. If he's going to craft a masterpiece like his most recent album, Yeezus, it's going to take focus and dedication, things that West knows a little something about. But what exactly can fans expect from his new release, SWISH? It's hard to predict. When the star released "Only One" at the end of 2014 and dropped it with a video of him and his precious daughter North, everyone was touched by the song's sweetness. Then, West blew fans away with "All Day" earlier this year, which had listeners head-bopping for months. His collaboration with Rihanna and Paul McCartney on "FourFiveSeconds," meanwhile, was a well-recorded track with a nice, stripped down vibe. All of these songs have their own distinct style and sound, making it hard to predict what SWISH will sound like. Regardless, based off of West's past releases, it seems pretty clear that this album will be a good one.

What are fans going to do while waiting for this album to drop? How will Yeezus surprise everyone with SWISH? So many questions, so little time. I'm ready when you are, Kanye!