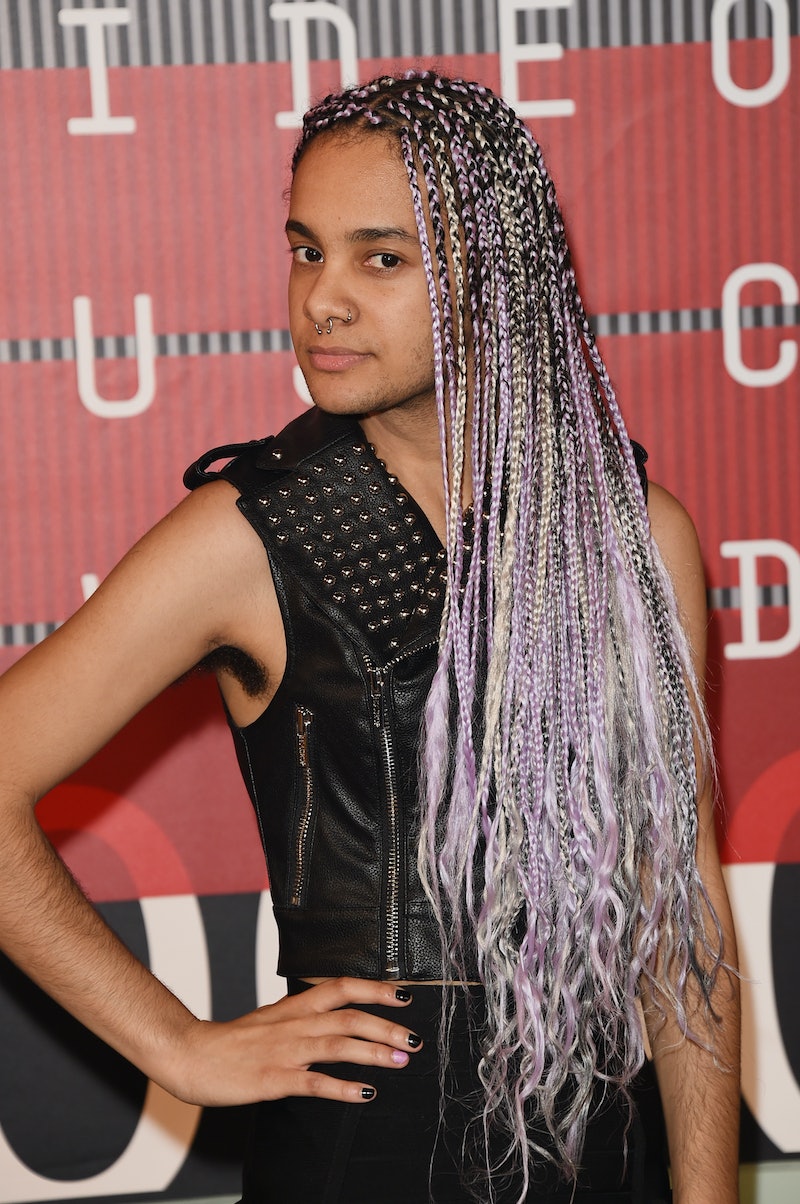 The past 12 months have been pretty great ones for queer visibility in fashion. With the rise in discussions surrounding queer identities and androgyny in the industry, fashion has arguably been becoming way more queer-friendly of late. And it's awesome. With gender-nonconforming models doubling as activists, queer-specific fashion projects, and trans individuals making magazine covers and becoming faces of high profile brands, our long fight to be represented in the media is finally paying off. It's undoubtedly an exciting time to be a queer person in fashion and beauty.

However, as we approach 2016, we should be considering the ways we can improve upon this representation to be more inclusive and intersectional. Much of the queer and trans repping that's going on, while rad and important in its own right, is spearheaded mostly by white people (at least when speaking about mainstream media). That's why I love Tyler Ford, a model, writer, and speaker who discusses the ways in which being a person of color and being agender intersects for them. We need more stories like theirs, and more diversity in queer representation in general (including for people who don't and/or don't want to pass as a certain gender by conventionally-defined standards). We've already come this far, so let's keep on pushing and demanding that the fashion and beauty industries include more diverse queer and trans humans in their projects going forward.

Until then, here are some of the greatest moments of queer and trans visibility in the sartorial world this year.

Despite Jenner's privileges as a white trans woman with means, there is no denying that one of the greatest wins for queer (and specifically trans) visibility this year was Jenner's cover for Vanity Fair 's July issue. For an Olympic gold medalist, media star, woman above the age of 60, and someone who was once perceived as male to come out so unapologetically as trans (especially by way of a magazine cover) was brave and groundbreaking to say the least.

2. Refinery29's Coverage Of Gender And Fashion

This year, Internet publication Refinery29 has done an excellent job at bringing visibility to queer and trans people by hosting genderqueer writers, interviewing gender nonconforming influencers, and facilitating discussions about gender in fashion as a whole.

The website held a panel about fashion's evolving relationship with gender, including important queer voices such as Alok Vaid-Menon, Grace Dunham, and Anita Dolce Vita. It also released a video interview with Menon about their gender identity and how it relates to fashion, as well as a lengthy and informed feature about the experience of trans women by beauty writer Arabelle Sicardi.

3. Tumblr Girls Saying They Would "Go Gay" For Ruby Rose

Australian actress, model, and queer activist Ruby Rose caused quite a stir on the Internet when she joined the cast of Orange Is the New Black for its third season. Straight girls everywhere took to Tumblr and Instagram to express that Ruby Rose was so beautiful that they would, in fact, "go gay" for her. This sparked a huge backlash from the queer community, which shut down these women and called them out for internalized homophobia.

Rose responded to the controversy in an interview with Huffington Post, telling the publication, “I think people are just saying that to be complimentary. I don’t think anyone’s doing it to be derogatory or to take away from what it really means to come out and identify as a different sexuality than what people will think you are.”

Despite her defusing of the situation, the controversy surrounding Rose helped spark widespread discussion about homophobic microaggressions, and how speaking about "sexual confusion" can overshadow the real range of sexuality and identity within us all.

Writer, speaker, activist, and model Tyler Ford has had many great moments this year, working tirelessly for queer visibility in all that they do. They travel the country speaking about their agender identity, and how their queerness intersects with their race. They work with Miley Cyrus' Happy Hippie Foundation to raise awareness about homeless queer youth. They participated in MTV's extensive coverage of trans and gender nonconforming identities this year, as well as sharing their story with The Guardian and StyleLikeU. They also wrote about navigating fashion as an agender person for Racked. Basically, they're the agender hero of the industry.

The H&M sister brand launched a campaign over the summer featuring transgender models Hari Nef and Valentijn De Hingh. But & Other Stories didn't stop there. The entire creative and production team was also transgender, with Amos Mac shooting, Love Bailey styling, and Nina Poon doing makeup, according to Elle. The campaign operated around the concept of "the gaze." And with the identities of the team in mind, this project didn't just portray trans people. It presented their stories from their perspective and literal gaze, giving them agency over their own narrative. Rad.

This past New York Fashion Week, androgynous model Rain Dove took Bustle along to castings and photo shoots to give the world a taste of what life is like as a genderqueer person in the modeling. In Bustle's short documentary, she discussed how she works to dismantle the gender binary, and how she uses her androgynous looks to her benefit by being a self-proclaimed "gender capitalist."

“A gender capitalist is someone who takes advantage of opportunities given to people based on their perceived sex or gender,” she told Bustle. “When I’m a gender capitalist in the fashion world, I basically can go to any casting that I want to, as long as somebody likes my face.”

Recently, she released a controversial photo shoot in which she rocked Victoria's Secret lingerie — placing her images beside that of herself in the same panty set with a VS model's face superimposed onto her own. Dove continues to make waves in the fashion industry, promote inclusivity, and demonstrate that there is more than one type of beauty in this world.

7. Lily-Rose Depp Coming Out As Queer

Johnny Depp's daughter and fashion's newest it-girl Lily-Rose Depp came out this past August by taking part in the Self Evident Project which, according to its website, is a "photographic document of 10,000 people in the USA that identify as anything other than 100 percent straight." The 16-year-old received overwhelming support by her father. Despite her legions of Instagram followers' surprise at the news, Johnny Depp told The Daily Mail , "I already knew because she tells me everything."

Most of us can attest to how difficult it can be to navigate adolescence, let alone when you're discovering and coming to terms with having a non-hetero sexuality. Depp's move was nothing short of bold; and an inspiration to people of all ages.

This past NYFW, production company and blog DapperQ partnered with bkyln boihood, Posture Magazine, and D.Y.D.H. Productions to host an all-queer fashion show. The collective presentation, dubbed VERGE, showcased androgynous fashion by queer designers, and featured celebrity models like Rain Dove, as well as a queer fashion panel. It was a major win for queer visibility, since Fashion Week is often a very cis and hetero-washed affair.

9. Andreja Pejic's Make Up For Ever Ad Campaign And Vogue Feature

This year, Pejic became one of the first transgender models to secure a beauty campaign. She was made the face of Make Up For Ever, with ads gracing the storefronts of practically every Sephora in the country shortly thereafter. Additionally, she was the first transgender model to be featured in Vogue , complete with a four-page profile about gender politics in the fashion world.

These moments, while incredibly rad and game-changing, are only the beginning. But if in 2016 we manage to become even more intersectional in our fight for visibility of queers in the mainstream, that'll definitely mean we're going in the right direction.