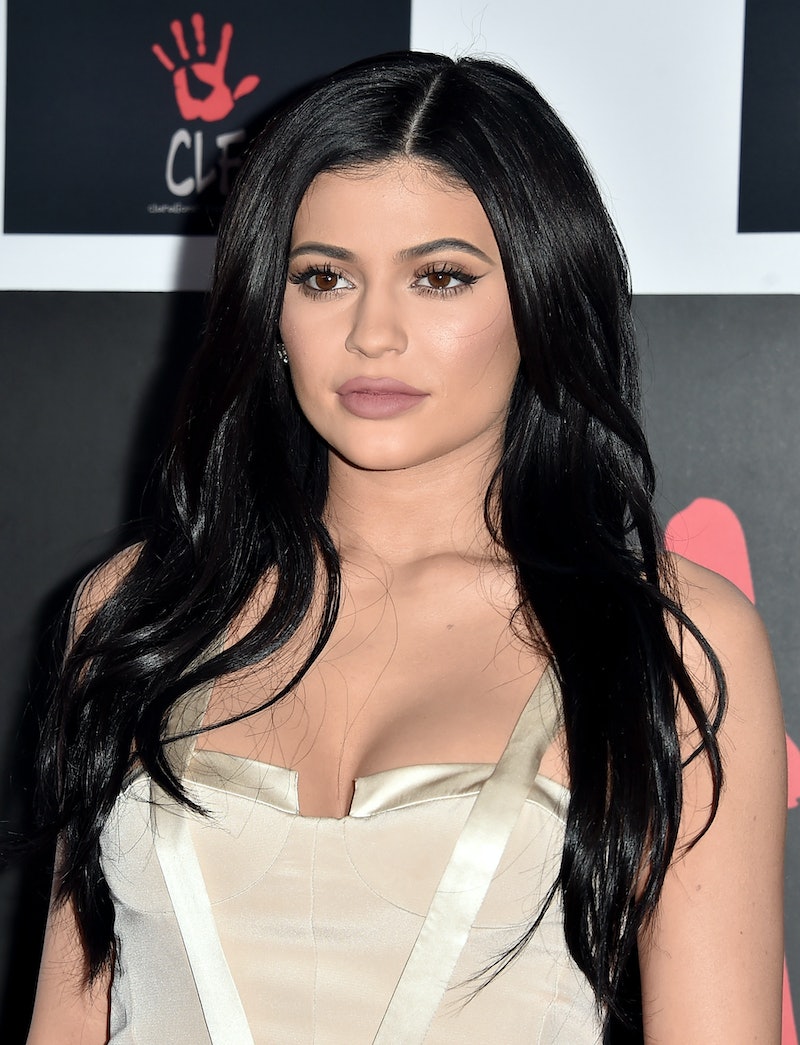 Kylie Jenner has had an amazing year. From the beginning of 2015 to now, she's gone from just the kid sister of the Kardashian/Jenner clan to starting her own wildly successful career. And, ever since her 18th birthday, people have been speculating — does Kylie Jenner drink? With all of her club appearances, Kylie's certainly spent a lot of time around alcohol, but the young reality star promises that she doesn't drink.

On a recent episode from this season of Keeping Up With the Kardashians, Kylie's 18th birthday celebration worried Kris, since it would be the very first time that Kylie would be working in a club where she could drink. But she reassured her mom by saying that she doesn't drink at all. Even before she reached the legal drinking age in Canada, Kylie and her older sister, Kendall, have fought off rumors on Twitter that they were drinking while underage because they're famous, after a report in People allegedly claimed that Kylie "freaked out" after not being served alcohol at a Beverly Hills club.

But Kylie's teetotal lifestyle isn't actually that strange among the Kardashian family. For the most part, give or take a Lord Disick, most of the family doesn't actually drink to excess... and Kim doesn't really drink at all, as anyone who watched Seasons 1-2 of KUWTK will remember from the beginning of her career. Actually, not drinking isn't the only similarity Kim and Kylie have right now — the youngest sister seems to be looking up to her older sister in a lot of ways.

Kim's career as a reality personality started in earnest when she began hosting events in clubs. With Kris as her Momager, Kim became a household name. Now, Kylie already had a leg up since she's been on reality TV for years, but her first move was to follow in Kim's footsteps, even also working on her birthday the way Kim hosted an event in Vegas in Season 1 of KUWTK.

Kim was one of the original Instagram superstars, and now Kylie is only trailing her follower count by only 10 million — and since they're both in the tens of millions, it's not that much of a lead. Maybe Kylie will come out with her own "Kylimojis" in a few years.

Kylie made headlines for both going partially nude and posing in a wheelchair for Interview magazine. Obviously Kim tried to "break the Internet" just a year ago — and she got her magazine start with a Playboy cover shoot. I suppose that means Vogue could be in Kylie's future!

4. Her Makeup Is One Of Her Signatures

After establishing herself as a makeup guru online, Kylie's lip kits sold out immediately, making it one of the most successful Kardashian-Jenner products ever, the same way Kim made contouring famous.

5. She's Changing Up Her Look Constantly

Actually, when Kim first started her career, she kept to a very similar look — long black hair, heavy lashes, and a nude lip paired with some kind of bodycon dress. It was the quintessential 2007 look. But, in 2015, style means never sticking to a single look for too long. From blue hair, to long acrylic nails, there's no trend Kylie hasn't tried and executed flawlessly.

6. She Has A Tendency To Invite Her Boyfriend To Hang With The Family

On a recent episode of KUWTK, Kylie invited Tyga on vacation with the Kardashian-Jenners, which made everyone else feel awkward. But, how is that different from all of those times when Kim brought Reggie, Kris, or even Kanye somewhere, totally distracting everyone? They're two peas in a pod, these sisters.