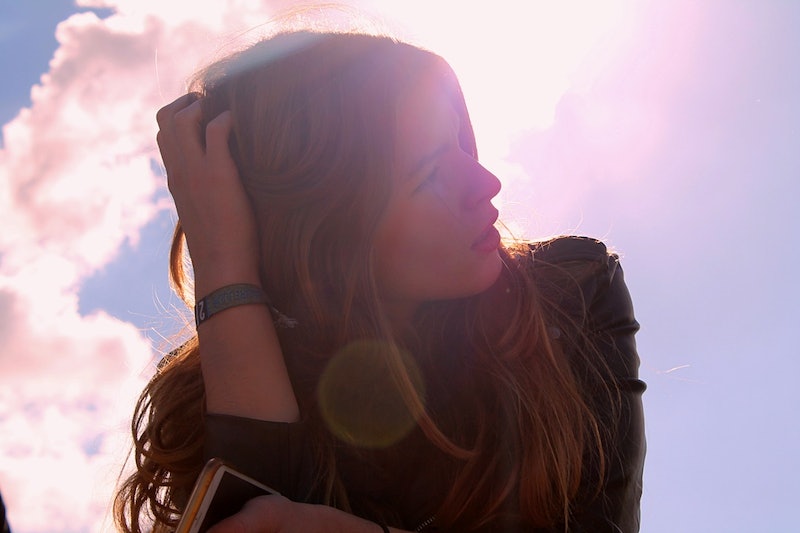 I'm not ashamed to admit that being a grown-ass woman is hard — which is why these New Year's resolutions for grown-ass women could be just what you need to make 2016 as amazing as you want it to be. As an adult, you're expected to be mature, level-headed, logical, and independent. You're supposed to know how to handle everything and what to say to even the most confusing questions. You have to work full-time, see your family and friends and significant other, cook, and still manage to make time for yourself. It's tough, but it can also be rewarding. And if you haven't been feeling like it's worth it lately, then you really need to make these New Year's resolutions every grown-ass woman should be making.

Juggling work, a social life, money, and your own peace of mind is just part of growing up. Sometimes the weight of responsibility is enough to make you want to curl up in a ball and be transported back in time so you can ask your parents to do it all for you. You can't do that, so the next best thing is learning how to handle it on your own — and also learning what you can't handle. The below resolutions aren't about cliche things like losing weight and saving money and exercising more. They're about figuring out who you are and also acting like the mature adult you're supposed to be.

If you're ready to make 2016 a productive and fulfilling year that is also fun for you, set some goals based on these resolutions. Here are 20 New Year's resolutions every grown-ass woman has to try this year. Thank me later!

This means no more sub-tweeting about that friend you're annoyed at but don't want to confront. It also means no more making statuses about how happy you are with a secret person to make your crush jealous. Just stop being shady online, OK? When you're behind a computer screen, it can be SO tempting to say something nasty or to hurt someone's feelings, but it's also so immature and such a waste of time.

2. Stop stressing over the things you can't control.

As someone who spends most of her life worrying about things she has no control over, I know firsthand that this is way easier said than done. Maybe you're rolling your eyes at me right now because of this. I get it. But seriously, stressing over things you have zero control over is not doing you any good. It's making you miserable and negative. Instead of endlessly complaining about the weather, try thinking of the good things happening around you — or work on something you DO have control over.

3. Get rid of friendships that aren't working.

One of the harshest truths about getting older is that you'll lose a lot of friends. You'll lose touch with a lot of people — no hard feelings, you just stop talking and hanging out. You'll also realize who you actually want to make time for. Think about your friend group. If there's someone you really don't like, stop making time for them. You don't have to keep friendships just because they've been around for a while.

4. Stop trying for someone who isn't putting in any effort.

This goes for significant others, friends, and coworkers — basically for anyone, really. If you're in any sort of relationship where you're the only person trying, and the other person doesn't seem to care, let it go. You don't deserve that, and you also don't even have time for that.

5. Make more of your own decisions.

It can be tough to make your own decisions, especially when they're very big and important. The age of social media makes it even harder — when you can sign on, make a question your Facebook status, and immediately get 10 comments, why wouldn't you? When you can look up reviews for even the smallest items you're thinking of buying, why not? While it's always important to research big life decisions, it's also important to listen to your gut and do what's right for YOU. And only you know what is.

We all follow that one person on social media who drives us crazy. Maybe it's the girl you knew in high school who posts the most annoying Instagram photos of all time, but you feel like you can't stop looking at them. Maybe it's that dude you once dated who you can't stand, but you get joy out of reading his Facebook statuses. Whoever it is, stop. You don't need that negativity and immaturity in your life anymore — you're a grown-ass woman.

7. Do more nice things for your parents.

Unless you have a terrible relationship with your parents, you should probably do some more nice things for them. Your parents are pretty awesome, and probably helped you out a lot growing up. Now that you're an adult, it's time for you to help them. Stop by unannounced with dessert or something. Take your mom out to lunch. Go grab a drink with your dad. Listen to their stories. Make them happy!

8. Get familiar with politics.

2016 is a presidential election year, in case you haven't noticed from the incessant Facebook statuses about Donald Trump. Even if you hate everything about politics, you should learn some basics. This is so you will sound mature and adult-like when you find yourself in the inevitable conversations about politics, but also so that you understand what is happening in your country. And so that you can be an informed voter!

9. Eat food that is actually good for you.

Food is delicious — obviously — but the point of eating is to give your body the nutrition and fuel it needs to work properly. You don't need to cut pizza out of your diet altogether, because that would be crazy. But now that you're a grown-ass adult, be sure to pick up some greens from the grocery store every now and then, OK?

10. Plan a vacation for somewhere new.

We all have bills, and we all have to save money. I know that going on vacation isn't easy for everyone. But you know what? You deserve it. It doesn't need to be somewhere exotic and fancy and expensive for it to be awesome. You can plan a weekend trip for someplace two hours away, and it'll still feel amazing. Just go somewhere new this year at least once.

Reading challenges are big during the new year for good reason: they help introduce us to books we wouldn't normally read. Instead of reaching for the same genre you always read, reach for something new. Maybe you'll hate it, in which case, you can stop reading it, but maybe you'll love it. Maybe you'll learn something new!

Not everyone is a cook or a baker, and that's fine. You don't need to be the adult woman who comes home from a busy day of work and still has time to make dinner and breakfast for the next day. But as a grown-ass woman, you should know how to make at least one thing that is awesome. It could be a dessert, a side, an entree, or an appetizer. Adults get invited to parties where they are asked to bring things. You should make something. Or, you know, just know a good recipe for yourself.

13. Throw away the stuff you aren't using.

What better time to organize your closets than the beginning of a new year? Get a jump start on spring cleaning, and throw away all of the stuff you don't use. Haven't worn it in a year? Toss it. Forgot you had it? Get rid of it. This little cleanse will keep you clean and organized.

Fast fashion can be a great, affordable outfit when you need something in a pinch, but I don't always love the quality. This year, broaden your horizons. You don't need to switch over to something super high-end. Just try to build a more mature wardrobe this year.

15. Call your friend on her birthday.

Facebook is awesome when it comes to birthdays. It reminds you of the birthdays of friends that you would normally forget, and gives you the convenient option of saying "happy birthday" on their wall rather than calling them. This year, put in the effort and call them to wish them a good birthday. It's so much nicer.

If you're given a certain amount of paid time off (PTO) at work (or vacation days, or personal days), use them. Don't let them go to waste. Use your sick days too! I can't stand watching people waste their time off. You work hard and deserve those benefits. You have every right to take them. Even if you're just having a staycation, you need a break from your job sometimes.

17. Stop spending all of your money on food.

If you don't love cooking, then I bet it's safe to say that a lot of your money — most of your money — goes towards food. Whether it's going out to eat or ordering in or even getting fast food, it doesn't matter — it's a waste. Using coupons and sales, you can spend less in the grocery store for meals that last for days. And it's better for you.

Asking for a raise is tough, but trust me — it isn't as bad as you think it will be. If you feel like you deserve more money at your job, get out there and ask for it. If you want a promotion, ask for it. You will almost never be handed these things. You need to go after them. Make 2016 the year you do it.

A stressful morning where you hit snooze five times, and then rush around like a maniac to get ready isn't the best start to your day. Try waking up a little bit earlier every day for the month of January. Make your mornings more productive!

20. Be nice to people instead of being angry.

A lot of adults are grumpy. Don't be grumpy. Be nice. You don't need to be Mother Teresa, but you can at least throw some smiles around, you know?