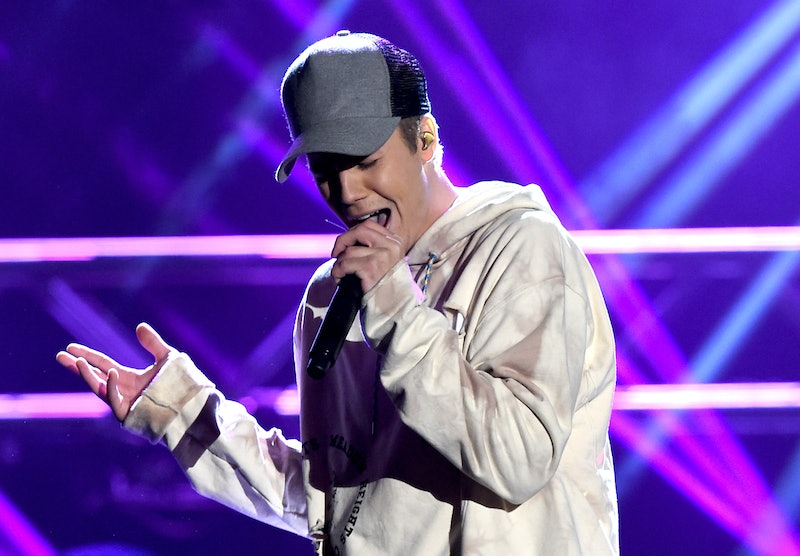 In 2015, Justin Bieber served up a totally unexpected, but very welcome comeback — with an umlaut. But now that the "Where Are Ü Now" singer's album Purpose has dropped for our listening pleasure, the Biebs doesn't show signs of stepping down from his reign. In fact, I think Justin Bieber's album Purpose will rule 2016. After listening to the new album from start to finish, I'm confident in saying that I think Bieber is poised to stay at the top of the charts — or close to it — for the next year.

Purpose is such a departure from Bieber's old sound — it's an album that's surprising in a very good way. The hit single "Where Are Ü Now" with Diplo and Skrillex (as Jack Ü) was just the beginning of the new Biebs. Purpose reminds me of another smash-hit, envelope-pushing, and electronica-influenced album by another Justin — Justin Timberlake's FutureSex/LoveSounds from 2006 (10 years ago!). It looks like Bieber will end 2015 occupying not one, not two, but three spots in the Top 5 of the Billboard Hot 100 chart with the songs "Sorry" at No. 2, "Love Yourself" at No. 4, and "What Do You Mean?" at No. 5.

And remember, this is just the beginning for Purpose. Here's why I think we'll be hearing so much more of this new Bieber album in 2016.

1. The Videos Are Awesome

Biebs dropped Purpose with all his music videos at once — semi Beyonce style. And those videos do not disappoint.

When Tropical House became a thing earlier this year from Thomas Jack and Kygo, I never thought it would be Justin Bieber to be the one to bring the EDM style mainstream. But now, I'm glad, because now more people will be able to appreciate it — as he mixes it with R&B and hip-hop. Biebs has created a truly unique sound with his collaborators.

Purpose is a very emotionally honest album for the pop singer, whose past hits include "Boyfriend," "Baby," and "As Long As You Love Me." But the songs on Bieber's new album dig way deeper when it comes to the ~feels~. "I've made a few mistakes / I'm the only one to blame," Bieber sings on the Purpose song "No Pressure."

5. But It's Also A Great Party Record

Even with all of those ~feels~, Biebs still knows how to get down while he's apologizing and make an album you'd wanna blast at your next party.

After all the apologies, the song "Company" is one of the most unexpected highlights on the album. It's an (ahem) unapologetic tune about approaching a no-strings-attached hookup — and it's got a sick beat that'll have you putting this one on repeat.

7. Especially For Justin Bieber Himself

If his recent performances are any indication, Purpose is elevating his dancing game to the next level.

8. But Even The Slower, Low-Key Songs Are Great

When I first heard "Love Yourself," I couldn't believe it was by Bieber (even while listening to the album). It's stripped down, acoustic, and so nakedly honest. It's no wonder the song is rising on the charts. The piano-based tune "Life is Worth Living" is great, too.

9. One Of The Songs Has An Empire Reference

I couldn't believe it when I heard it, but Big Sean makes an Empire reference in the Biebs song "No Pressure." It's pretty risque, but it was pretty cool, too.

10. The Songs Reference Past Relationships

Like many other hit songs and albums in 2015, Bieber doesn't shy away from talking his past high-profile relationships ( cough Selena Gomez) in this album.

11. The Collaborations Are Awesome

Bieber pairs up with Nas, Big Sean, Halsey, Diplo, and Skrillex on the album and it all works so well. And seriously, who ever thought that Skrillex and Justin Bieber would be making beautiful music together? And now that they are, I hope they never stop.

So if you haven't got to listening Bieber's Purpose yet, what are you waiting for? It's going to get even bigger in 2016.