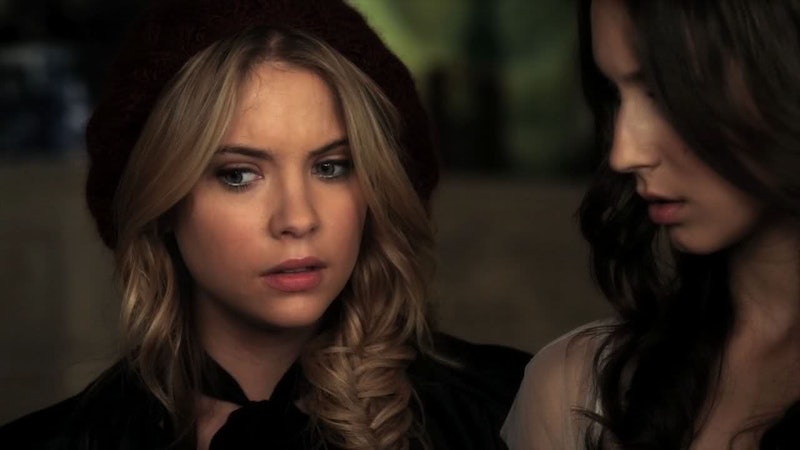 We are so close to the long-awaited premiere of Pretty Little Liars Season 6B, that I'm experiencing anticipatory anxiety. (I keep having dreams of CeCe Drake — don't ask.) One thing I've been concerned about — besides the aforementioned dreams — is just how the hell this story is going to progress without A. Pretty Little Liars is a show built on the foundation of A! Without A, there is no P. No L. No other L. Right...?

Well, apparently not, considering there's a new villain in town, and according to MTV News, this Big Bad isn't playing with doll houses. This Big Bad is seriously dangerous.

But who is the new villain? If you take the flash forward in Season 6A's finale as gospel, then the villain — who goes by "B" — is a he. Which means we can rule out a majority of the cast, and be that much closer to answers! Not so fast. This is Pretty Little Liars, after all. One should know to never take any clue — no matter how large or small — as gospel. There's a world of possibilities out there for B. Like, what about Hanna Marin? Could Hanna Marin be B? Crazier things have happened.

I've always been a Hanna Marin supporter (and borderline apologizer), but that doesn't mean I'm about to rule her out as a contender. Mostly because there are a few clues that point to Hanna being B, and they cannot be ignored any longer.

Take for instance, the fact that Hanna bolted to Europe! Sounds like something a guilty party would do to me. Plus, it seems the Liars had been doing just fine until Hanna made her way back into Rosewood. Coincidence or not?

There's also a few hints in the promos for Season 6B that suggest Hanna might be B. Like when Melissa (Spencer's older sis) tells Hanna, "We all have a past...aren't you curious what she's going to use against you?" Or when Caleb (Hanna's ex BF) — talking through a computer screen to someone with gloves (presumably a villain, as we know that villains always wear gloves) — says, "I don't know who you are, what kind of games you think you're playing, but if you can change the rules, so can we." See for yourself in the promo below.

Could he be speaking to Hanna? Maybe...

All this talk about "changing the rules," could also point to one of the Liars being B. Because seriously, what would change the rules more than that? People have long been speculating that a Liar might be villainous. Maybe now, they'll be right.

Find out when Season 6B premieres January 12.