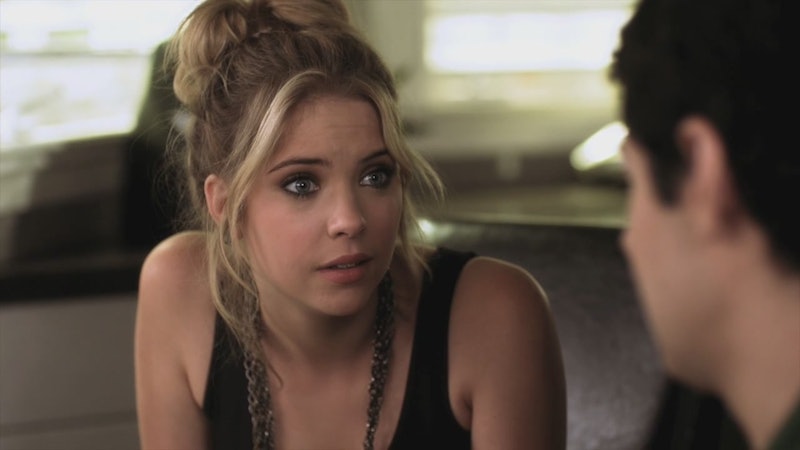 Looking back on 2015, I think it's safe to say that it's been one heck of a year — especially when it comes to pop culture. This was the year of major shakeups: we're talking Zayn Malik leaving One Direction, a new Star Wars hitting theaters, and Adele dropping an album that even the most stoic person couldn't get through without tearing up. If you paid even the tiniest bit of attention to the world this year, you know that Really Big Things happened — so who better to share your reactions and explain these events than a television character whose biting snark never fails us? Hanna Marin from Pretty Little Liars is in your corner here when it comes to talking all things 2015.

Hanna has been through the ringer this year, and though Pretty Little Liars hasn't quite caught up with 2015 (it seems that we'll be entering 2016 with the Liars when the series picks back up in January after a five year time jump) Hanna still understands all of your feelings about the events that went down in the entertainment sphere this year. But, because she's Hanna, she's also equipped with the absolute best quotes in order to explain those feelings.

Here's how Hanna would have reacted to these 2015 pop culture events, because we all secretly wish she was along for this ride:

1. When You Finally Saw Jamie Dornan In 50 Shades Of Grey

2. When You Watched Blake Shelton And Gwen Stefani Show All The PDA

You were pretty bummed when Shelton and Miranda Lambert split up, but she's off being a boss country star, and he's found love with your favorite '90s rocker. You're totally onboard for this new couple.

3. When The Unthinkable Happened On Game Of Thrones

He can't really be dead though... can he?

4. When You Heard Zayn Malik Was Going Solo

Umm... what?!? And now One Direction is taking a crazy long break from music? Ugh. What is this life.

5. When You Listened To Adele's New Album

There's a certain kind of gross crying that can only be induced by Adele's songs.

6. When You Heard Those Rumors About Justin Bieber And Kourtney Kardashian

So... Kourt and the Biebs are supposedly hooking up?!? You can no longer keep up with what celebrities are macking on what other celebrities.

7. ...And Those Rumors About Ben Affleck And The Nanny

Don't believe everything you read and all of that, but still... you'd rather not think about Affleck doing the most cliche thing possible.