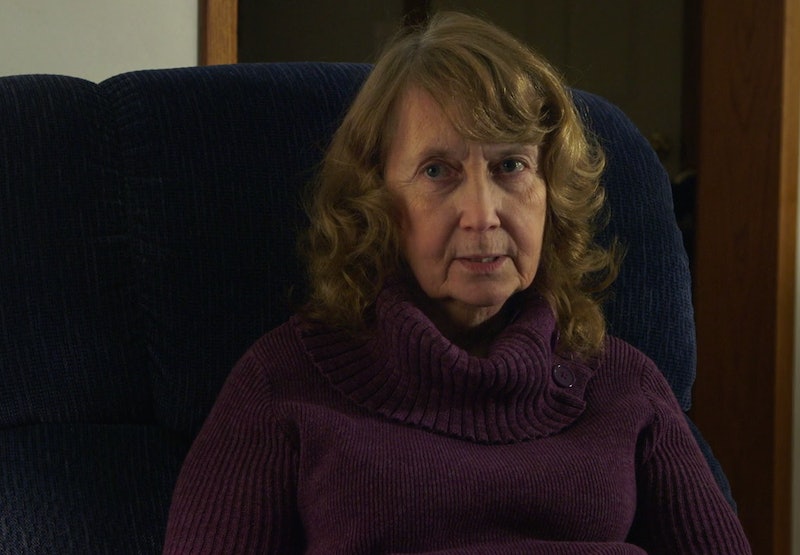 As Netflix's documentary Making a Murderer shows, Steven Avery's case is a complicated one, with the Wisconsin man currently serving a life sentence in prison after being convicted of the murder of Teresa Halbach. But, despite his conviction, Making a Murderer shows he often has a significant other by his side, so is Steven Avery still with his girlfriend, Sandy Greenman? The final episode of the series, "Fighting for their Lives" highlights Greenman's relationship with Avery, even as he's behind bars. [UPDATE: Greenman has since told various outlets that she and Avery have since split up but remain "best friends."]

The introduction to Greenman comes very late in the series as she is driving to visit her boyfriend Avery in prison and discusses how the guards know her there. Greenman says, "You have to laugh ... It's not good to be known that well in a prison." While the series does not give the exact dates of Avery's relationship with Greenman, it does tell us she wrote to him after he was convicted of murdering Halbach in 2007 because she believes he is innocent. According to the docuseries, they struck up a correspondence, which included talking on the phone several times before Greenman eventually decided to visit Avery in prison.

In the beginning stages of their relationship, Greenman says in the documentary she was married and both Avery and Greenman claim their relationship started as a friendship. Greenman's husband suffered from Alzheimer's and Parkinson's disease and Greenman says that while she believed she was going to be a blessing and comfort to Avery, he actually helped her deal with her husband's illness. Greenman says that it wasn't until "several months after [her] husband passed away" that she realized that there was more to her relationship with Avery and they began to date.

Throughout the docuseries, we see Avery has three relationships. First, he was married to Lori Mathiesen (now Lori Dassey — she's married to Avery's ex brother-in-law) when he was wrongfully convicted for the sexual assault of Penny Beerntsen. As shown in the docuseries, Avery and Mathiesen married on July 24, 1982, had four children together (plus, a child from a previous relationship for Mathiesen) and divorced in 1988 after their marriage deteriorated while Avery was in jail.

Avery's second relationship documented in the series is with Jodi Stachowski, whom he met after he was exonerated from the Beerntsen assault in 2003. Stachowski was in jail herself for a DUI when Avery was arrested for the murder of Halbach in 2005. The pair never married, but discussed it and Stachowski was shown to believe in Avery's innocence regarding the Halbach case when she was interviewed for the documentary. Eventually, though, the couple drifted apart, as Avery was imprisoned while waiting for his trial, and Stachowski was required by her parole officer to move away from Avery's house and cease contact with him.

Avery was single from 2006 until he and Greenman began dating sometime after he was convicted of murder. The series shows she wrote her first letter to him the day after Steven's verdict was reached, which was on Mar. 18, 2007, so that means she first actively contacted him on Mar. 19.

Greenman says in the documentary she has known Avery for seven years, and the documentary shows her being involved in 2012 when Avery asked for his own case files to find a new defense to free himself and also when he was moved from Boscobel prison to Waupun Correctional Institute where he currently resides. It was at that time that she first ever got to touch Avery rather than seeing him just behind glass, though the year of Avery's move to Waupun was not clearly indicated in the documentary.

Because Greenman is in the last episode of Making a Murderer, it's implied that she is still Avery's girlfriend. And, according to what appears to be her Facebook page, she is still listed as "in a relationship." Since she first wrote to Avery in 2007 and the documentary has her stating that they've known each other for seven years, then the filmmakers behind Making a Murderer spoke to her around 2014/2015, making their relationship still intact as of pretty recently. As for Avery, Greenman seems to provide some much-needed solace as he lives his days out in jail. In the documentary he sums up his relationship with her saying, "Sandy's mostly the important person in my life and you might figure, my future."