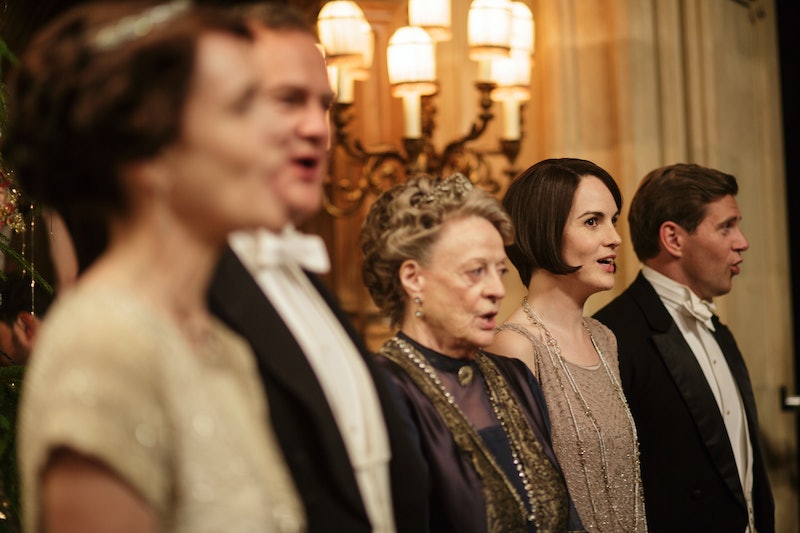 Although I have tried to be as blasé as Lady Mary about the fact that Downton Abbey will officially end with Season 6, I am still having trouble coming to terms with the truth. The final season premieres in the U.S. on Sunday, Jan. 3, so prepare yourself for the end with a recap for Downton Abbey Season 5. While denial is one stage of grief, it's time to move on to acceptance quickly, since the beloved show already finished airing in the U.K. Downton is over after nine more short episodes, but before that happens, relive Season 5 to get the most out of the new season.

As per usual, Julian Fellowes managed to mix the poignant with the ridiculous in Season 5 of his historical drama. Along with all of the convoluted love stories (I think there was a record number this season), there were plots of a stolen baby, intrigue with Russians, and more jail time for the Bates family. However, these were balanced with the tamer — and more random — stories of Daisy bettering herself with the help of Tom Branson's girlfriend, cousin Shrimpy divorcing his heinous wife, and the Dowager Countess having a gambling maid. And Spratt somehow became my favorite character! (Just kidding, but I did love watching him squirm.) Plus, all of that stuff about Lady Mary's love life in Season 4 pretty much came to naught in Season 5.

Remembering all of the ups and downs of Season 5 only makes me more depressed that Season 6 is the end, but if you've made it this far without British spoilers of the final season, then there is something to celebrate. Before Season 6 officially premieres in the U.S., prepare yourself a nice cup of tea and catch up on everything that happened in Downton Abbey Season 5.

There's always a decent amount of turnover when it comes to the servants of Downton and in Season 5 it was Jimmy's turn to be fired after he was found in bed with the visiting guest Lady Anstruther. I'm pretty Thomas was the only one upset about this.

Lady Mary Had A Fling

Lady Mary wanted to see if Lord Gillingham had the goods to be her husband, so she agreed to his suggestion of going away for a weekend of sexy time. She sent poor Anna on the task of getting a diaphragm and then made her hold onto it post-use, getting her into trouble with Bates. C'mon, Mary! Do some of your own dirty work for once! But speaking of dirty work, Gillingham couldn't live up to the precedent set by Matthew and she dumped him... after an elaborate scheme where she had to kiss Charles Blake to make Gillingham realize he officially didn't have a chance anymore. And to top the whole tryst storyline off: Mary's dear grandmother found out about the rendezvous and confronted her about it.

Mr. Molesley Got A Girlfriend

After a very ill-advised hair-dying session, Molesley continued his friendship with Miss Baxter, even supporting her after he found out the dirt that Thomas had on her — that she stole from a former employer. Of course, Molesley was pretty upset about this information, but once Baxter confessed the truth to Cora, who rewarded her lady's maid's honesty by allowing her to continue to work at Downton, the pair became closer.

The Dowager's Saucy Past Was Revealed

With displaced Russian aristocrats in England (they had fled after the Russian Revolution), Lady Rose showed her generosity by inviting some royal refugees over to Downton for tea. What Lady Rose didn't realize was that one of the Russians, Prince Kuragin, had an affair with her Aunt Violet years earlier — and was still down to politely bone. The storyline continued all the way through the Christmas special, where Violet officially ended the affair and reunited Kuragin with his wife.

Miss Bunting Got The Boot

Tom Branson's dalliance with the school teacher Miss Sarah Bunting came to an end in Season 5 after she continued to insult Lord Grantham and his aristocratic family. Even though she tutored Daisy, she was kicked out of Downton by Lord Grantham since she continually shared her unwelcome political views and was downright rude. Miss Bunting got a new job and moved away — thus the end to another Downton Abbey affair.

Art historian Mr. Simon Bricker took a liking to Cora when he came to offer insight on a painting at Downton. While the lady of the house may have encouraged Mr. Bricker a bit on their dinner date in London, she never expected he would come into her bedroom uninvited — nor did Robert, who ended up slugging him, which ended the flirtation.

While I just always assumed Bates was guilty of Mr. Green's death (the valet who raped Anna), it turns out he really wasn't! Really! The train ticket that Mrs. Hughes and Lady Mary had found in Season 4 happened to actually be his ticket to freedom, and luckily, Baxter could vouch that it was unused. With his innocence proven, Anna's mind could officially be put at ease.

Thomas Tried To "Cure" Himself

It's hard to make me feel bad for Thomas, but Season 5 of Downton successfully did that when he underwent electrotherapy and took pills, which had an adverse effect on his health, in the hopes of ridding himself of his homosexuality. Even in 1924, Dr. Clarkson knew that no drug would change Thomas and was supportive when he told him to stop taking them.

Edith made a nuisance of herself (what else is new?) when she kept stopping by the Drewe family home to check on their adopted baby — which was her biological child — Marigold. Once she learned that her love Michael had died in Germany, she decided to flee with Marigold to London. Her grandmother, aunt, and mother intervened and got Edith to "adopt" Marigold to unburden Mrs. Drewe. While Lord Grantham is usually particularly clueless, he even figured out that Marigold is really Edith's child and accepted the situation. Finally! Edith caught a damn break. (Hilariously, her sister Mary still had no idea of Marigold's parentage.)

Fans will never be able to watch the opening credits the same way after Lord Grantham's beloved dog, Isis, died.

What is Downton Abbey without its love plots? The Dowager had hers and Isobel Crawley also got her chance of love through Lord Merton, who proposed to her in Season 5. Violet tried to sabotage their relationship because she would miss her friend — even getting poor Dr. Clarkson involved — but it was unnecessary since Lord Merton's snobby sons were the reasons that Isobel rejected his proposal of marriage. Their story in Season 5 ended on the note that Isobel would gladly marry him if she ever felt welcomed into his family.

Rose sure settled down significantly and that was topped off when she met the sweet Atticus Aldridge. While the pair was happily in love, they had some obstacles to face — like the fact that Atticus is Jewish (oh my!), Rose's parents were getting a divorce (scandal!), and (most importantly) her evil mother framed Atticus to look like he spent the night with a sex worker (non-sarcastic oh my and scandal!). No wonder Shrimpy is divorcing that woman. But good on Rose for marrying her man despite it all.

In an unexpected twist, it wasn't Bates that got sent to prison in Season 5 of Downton, but his wife Anna. Just when things seemed to be going so well, a witness claimed they saw Anna at the scene of the crime where Mr. Green was killed. Outrage — about the unjust world and the fact that this storyline was still kicking — ensued.

With Lord Gillingham and Charles Blake out of the picture, the Christmas special was the perfect time to introduce a new love interest for Mary — the playboy Henry Talbot, portrayed by Matthew Goode. Though he sure made an exit in his fancy car, there was almost no doubt in my mind that Henry would be back for Season 6.

The pair that has functioned better than any married couple ever has decided to make it official when Carson proposed to Mrs. Hughes. After Carson was envious of Mrs. Patmore's retirement plan, he asked Mrs. Hughes to buy a property with him. Mrs. Hughes confessed she couldn't afford it because she has a sister with mental disabilities to financially take care of and Carson dropped the tear-stained bomb: That he wanted to marry her. She said yes, of course, you old booby!

Chauffeur turned son-in-law Tom Branson frequently talked about leaving Downton after Sybil died, but in the Christmas special of Season 5, he sealed the deal since he got a job in Boston. Mary, Edith, and Tom shared a tender moment remembering Sybil that is making me tear up just thinking about it. The only solace I can find is that I hope to see Branson's face for a cameo in Season 6.

How many times can the most-loved couple on Downton be pulled apart? After it was revealed that Anna was a child of abuse who had wielded a knife on her stepfather, her chances of getting out of jail were grim. Bates decided the best course of action was to write a letter confessing to the murder of Mr. Green (remember — he really didn't do it!), which set Anna free, but made him flee to Ireland. Since it was Christmas though, he returned to Downton to surprise his depressed wife, which almost made me forget that he was still wanted for murder. Just something to have me even more pumped for Downton Abbey Season 6.

More like this
Ava DuVernay Thought The 'Queen Sugar' Series Finale Felt “Really Satisfying”
By Brad Witter
The ‘Emily In Paris’ Season 3 Trailer Teases Major Career & Love Crossroads For Emily
By Bustle Staff
The First Trailer For 'That '90s Show' Includes So Many Nods To The Original Series
By Jack Irvin, Alyssa Lapid and Grace Wehniainen
'Tell Me Lies' Season 2 Is On The Way & The Cast Already Has Ideas For What's Next
By Gretchen Smail and Grace Wehniainen
Get Even More From Bustle — Sign Up For The Newsletter