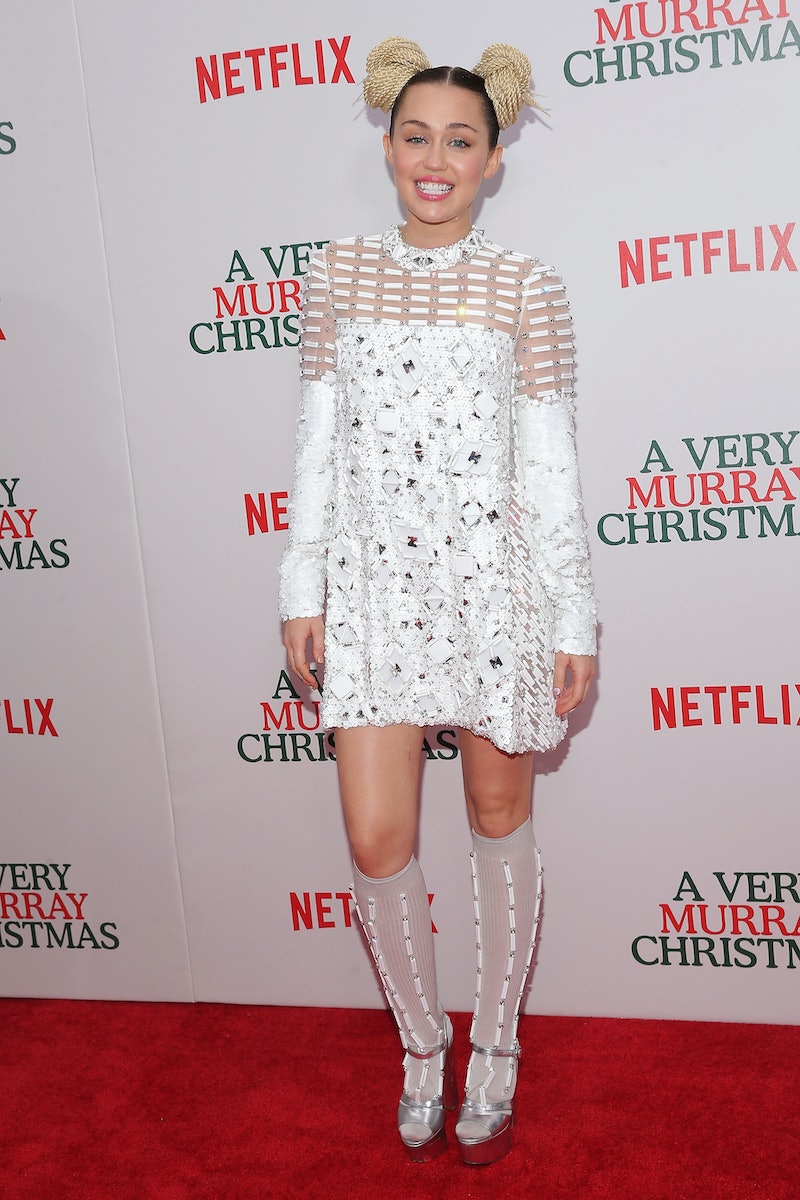 Of all the celebrity Christmas Instagram posts to surface this year, my favorite so far has been Miley Cyrus' Divine T-shirt selfie, which she shared on Dec. 26. The simple image features a pouting and apparently makeup-less Cyrus with a blurry dog. But the main focus of the picture was definitely her new T-shirt, emphasized by her own caption of, "Hope yiew had a divine Xmas."

According to Canadian eBay store tshirttimemachine, which sold one of these tees last year for $59.99, the top is '80s vintage and "super rare." Given Cyrus' famously crazy taste in clothing, I'm not surprised that even her T-shirts have to be that little bit extra special.

Divine has been one of my heroes for a long time. A muse for John Waters and a self-proclaimed "queen of trash," Divine's IDGAF attitude has influenced my personal life, personality, and body positivity. She had extremely successful drag queen, music, writing, and acting careers, and is still known as one of the most famous drag queens of all time. IMO, she deserves it, because who else would have eaten a dog turd on screen (shout-out to Pink Flamingos) for the sole purpose of grossing people out?

With Divine's legacy in mind, it's no wonder that the ever-controversial Miley Cyrus would want to honor her legacy this Christmas.

This T-shirt selfie is probably one of the smaller things that Miley Cyrus has gifted us with this holiday season. On Christmas Day, the pop star released a new track titled "My Sad Christmas Song," collaborating with The Flaming Lips to produce the new sound. The song is available to stream on Soundcloud with an extremely kitschy single cover (the kind of kitsch John Waters could get behind).

Personally, I think it's really sweet of Cyrus to take a chance and help validate some of the lonely feelings and experiences many have to endure during the holiday season.

As well as taking the campy route with her Divine T-shirt (not to mention the melancholy route with her new single), the 23-year-old also made sure to wish us all A Very Murray Christmas, singing us two songs with everyone's favorite actor Bill Murray for a Netflix special directed by Sofia Coppola. Her versions of "Sleigh Bells" and "Let It Snow" sent shivers down my spine, arguably helping us all remember the true reason for Miley Cyrus' fame: her stunning voice.

But between the super cute red and white-trimmed Christmas dress or the Divine T-shirt? I know the tee is definitely my favorite of all celebrity looks served this season.