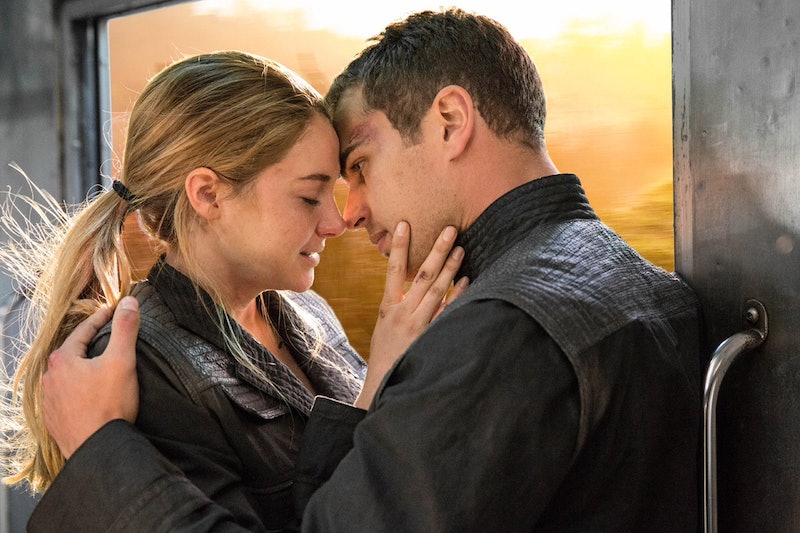 What do Harry Potter, The Hunger Games, and Divergent series all have in common? Well, for starters, they each have a protagonist we absolutely love and a villain or two we loathe. There are side characters that make us laugh, plot lines that make our hearts beat fast, and stories we hold close to our hearts. These three bestselling series actually have a lot more in common than you'd think, so much so, that I bet you won't be able to tell certain quotes from Katniss Everdeen from Harry Potter's.

Each series has a major war going on, a heavy dose of fear and excitement, as well as characters that have similarities. The Hunger Games certainly doesn't have magic, and Divergent factions are not nearly as pleasant as Hogwarts houses, but you'd be surprised by how alike each series can sound when taken out of context.

Don't believe me? Try it out for yourself! Read the quote below, take a moment to guess, and scroll down to reveal the answer. May the odds be ever in your favor. Take a swig of Felix Felicis if you must. And make sure to choose your answer as carefully as you would your faction.

3. "I'm going to keep going until I succeed — or die. Don't think I don't know how this might end. I've known it for years."

4. "You care so much you feel as though you will bleed to death with the pain of it."

5. "It's been so long since someone said my name that way, like it was a revelation and not a threat."

6. "You're punishing him over and over for things that are out of his control."

7. "Killing is not so easy as the innocent believe."

8. "I was beginning to feel that I had finally found a place to stay, a place that was not so unstable or corrupt or controlling that I could actually belong there. You would think that I would have learned by now — such a place does not exist."

10. "Everything has changed and it won't stop changing anytime soon."

12. "Fools who wear their hearts proudly on their sleeves, who cannot control their emotions, who wallow in sad memories and allow themselves to be provoked this easily — weak people, in other words..."

13. "My sleep wasn't peaceful, though. I have the sense of emerging from a world of dark, haunted places where I traveled alone."

14. "You think the dead we love ever truly leave us? You think that we don't recall them more clearly than ever in times of great trouble?"

15. "We may both be bad, but there’s a huge difference between us — I’m not content with being this way."

16. "At some point, you have to stop running and turn around and face whoever wants you dead. The hard thing is finding the courage to do it."

17. "Having an eye for beauty isn't the same thing as a weakness."

18. "It must require bravery to be honest all the time. I wouldn't know."

19. "You know, I think this is the first time we've ever done anything normal together."

1. Could this be Tris talking? Or is it Katniss during one of the games? You never know, it could always be the wise words of a Hogwarts professor...That's right, it's Katniss during the 74th Hunger Games.

2. Who is choosing who now? Maybe you were thinking it was the Hogwarts houses talking, but it's actually the factions of Divergent.

3. All three of the series have a lot to do with death and dying — a fate that comes too soon for our beloved characters. So which one is it from? Did you guess right? This quote is from Harry Potter and the Deathly Hallows.

4. Is this quote talking about Peeta? Harry? Four? Who?! It's Dumbledore's wise words to Harry in Harry Potter and the order of the Phoenix.

5. With main characters like Harry Potter, Katniss Everdeen, and Tris Prior, it's hard to know which one is finally hearing their name said in a positive light. This was a tricky one: It's actually Four speaking from the fourth edition of the Divergent series, Four: The Traitor.

6. Maybe you have a good feeling about where this one is from, but do you recognize who is saying it? It's Haymitch! Good ol' Haymitch calling out Katniss for being too harsh on Peeta after he's been hijacked in Mockingjay from The Hunger Games series.

7. Katniss knows how personal killing is, but Tris is fairly aware of all the pain it has put her through. I don't know, this is a tough one. It's actually Dumbledore in Harry Potter and the Half Blood Prince talking about horcruxes.

8. Is this quote talking about Hogwarts? Panem? Neither? It's Tris! In the final book of Divergent, Allegiant, Tris is slowly learning that if she wants to find a safe home, she'll have to create one rather than relying on someone else to give her one.

9. This sounds like something President Snow would say... Nope! It's a young Voldemort talking in Harry Potter and the Half Blood Prince about his greatness that has clearly caused great envy.

10. Everything changes after Harry defeats Voldemort, and when Katniss kills President Coin — which one could it be? It's surprisingly neither, it's Tris in Divergent's Allegiant!

11. With all three series have a great war going on, you've got to take your best guess! This quote comes from Harry talking to Aberforth Dumbledore in Harry Potter and the Deathly Hallows.

12. Who could be saying such an insulting thing? It's Severus Snape in Harry Potter and the Order of the Phoenix while he attempts to teach Harry the act of Occlumency.

13. Harry Potter is certainly not a character who has pleasant dreams, nor is Katniss Everdeen. It's definitely Katniss when she wakes up after being knocked out, realizing that she was saved while Peeta was taken to the Capitol in Mockingjay from The Hunger Games.

14. Which one could it be? This quote is said by Albus Dumbledore in Harry Potter and the Prisoner of Azkaban.

15. Is this Harry talking to Voldemort? Katniss to Snow? Nope, it's Tris talking to Peter in Insurgent from the Divergent series.

16. All the main characters in these three series are wanted dead at some point, so this is no easy quote to place. It's Katniss from Catching Fire from The Hunger Games!

17. Who says this charming quote? It's Peeta from Catching Fire, of The Hunger Games, of course!

18. Certainly not all of our favorite characters are brave the entire time, but which one said this? It's Tris who says this when she first arrives at her new faction, looking over at all the new Candor transfers in Divergent.

19. Which one of these characters does something normal for once? It's Peeta talking to Katniss in The Hunger Games' Catching Fire while Peeta paints and Katniss sits next to him and watches.

20. There are definitely moments where many characters in these series say similar things, but which one received this response? Did you see that one coming? It was Snape and Dumbledore talking in Harry Potter and the Deathly Hallows.