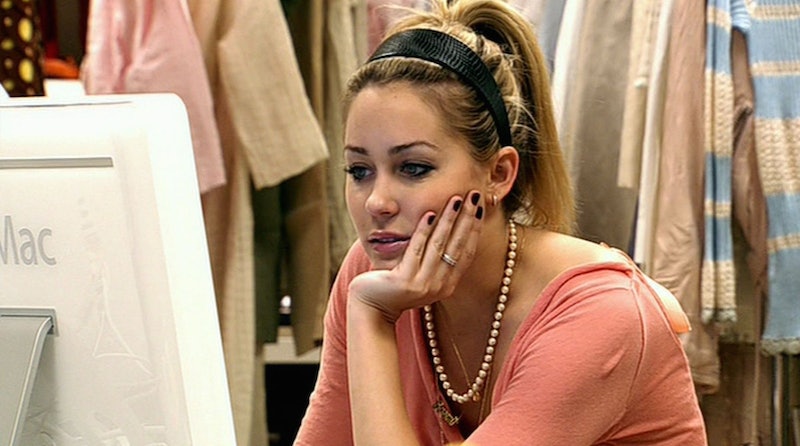 When The Hills ran through its six seasons, 102 episodes, and two different narrators, I observed it with the same suspension of disbelief we all did. Maybe that's because the show that followed a group of young and monied 20-somethings in Hollywood — with its unapologetic melodrama and soap opera-esque story-lines — was reality television gold, and I, like most teens/adults/breathing humans in the aughts, couldn't get enough.

We all watched when our favorite Orange County resident, Lauren Conrad, moved to West Hollywood in to pursue a career in fashion vis a vis an internship with Teen Vogue. Some of us even admitted enjoyment in the process. But whether or not you loved to hate on L.C.'s many headbands, the painstakingly obvious manipulated narratives, or cast mates with two names (Justin-Bobby, what up!), one thing has become clear: Unlike many reality TV shows that have come and gone since '06, The Hills has stood the test of time. Often imitated, never duplicated, other reality TV attempted to follow The Hills recipe, but nothing has influenced the zeitgeist in the same way since. Here are some reasons why The Hills has remained surprisingly relevant, and perhaps why, nothing's ever come close to filling its designer shoes.

1. For Its Beautiful Cinematography

The Hills cinematographer Hisham Abed's capturing of Los Angeles might have seemed like an annoyance to our much younger perception of the world back in '06. You might have even questioned why there were so many overhead shots of the 101 freeway. But if you watch it back now, you'll notice something extraordinary: The Hills cinematography is not only gorgeous to watch, it adds tension to the plot of each episode. The shots are often painted with a silver wash, and lingered on for maybe longer than they should have been. It all worked effortlessly with the atmospheric mood.

2. For Its Flawless Soundtrack

The Hills had many an iconic musical moment. But, from the depressive tunes of James Blunt to the uplifting opening song from Natasha Bedingfield, nothing was more perfect than the "You know what you did scene." As Lauren and Heidi's epic showdown regarding the "sex tape rumor" commenced, OneRepublic's "Apologize" hummed on. The scene was already perfect, the song only added to the anxiety and sadness.

3. For Its Ageless Advice

Whether or not you view The Hills' advice as the best or worst advice to have either added to or ruined your maturation, you can't disagree with the fact that we were gifted some eerily prophetic truth bombs. From "Love is not a maybe thing. You know when you love someone," to "when you're in an interview, you're supposed to lie," to my personal favorite: "Homeboy wore combat boots to the beach. I know you don't want to call that your boyfriend," it was all perfect.

4. For Its Strong Female Characters

Making the case for the female cast of The Hills as strong, autonomous, female characters might have some scoffing. And it's true that a majority of the show's narrative was forced around the idea of boys — i.e. how to date them, how to not date them, how to change yourself for them, etc. — but the woman were also portrayed as purveyors of one another. Or, at least, they tried to be. There were issues along the way (Jen Bunney's notorious backstab, the Heidi vs. Lauren unraveling), but all together, the woman tried to build each other up.

5. For Its Commentary On The Post-Modern Celebrity

Celebrity. Reality star. The distinction has become blurred. The Hills was so obviously fake even the general consensus agreed it was fake — but we called it "reality" anyway. Since The Hills aired its controversial series finale that basically confessed to the truth, the cast has admitted to (mostly) everything being manipulated. I'm not surprised, but many fans still act shocked. I suppose that's because, to the audience, that's part of the allure. We consume reality TV at face value, as entertainment. We know it's not 100 percent authentic. The shows know we know, and yet, we hardly discuss the non fictionality.

Is this unsettling or compelling? I believe that The Hills would argue it's both. And that's why, today, six years after it's ended, as we still walk that line between real and reality in the media we consume, The Hills stands still; timeless.