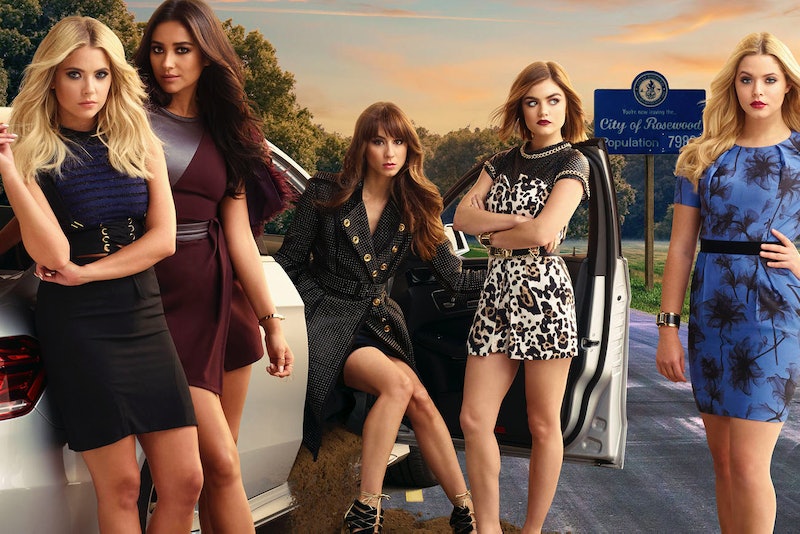 If gloomy, chilly January days don't seem like enough of a reason to get out of bed, then maybe this will be: Pretty Little Liars is returning on Jan. 12 with the premiere of Season 6B, which means that your winter days will be filled with enough mystery to keep you content into spring. If you've been frustratingly marking every Pretty Little Liars-free day on your calendar since Big A was unmasked back in August, you can rest easy knowing that the day we've all been waiting for is rapidly approaching. Your Tuesdays are about to get a lot busier, and while your friends may judge you for bailing on Quizzo to hole up on your couch, at least you'll have Spencer, Aria, Emily and Hanna to keep you company this winter. What more could you really ask for?

The proverbial "they" say that waiting for something epic is half the fun, but there's something particularly agonizing about waiting for Pretty Little Liars. For one thing, watching PLL is a waiting game in itself: you can't reveal A's identity in every episode, right? Now that it's so close to the Season 6B premiere, I can finally identify the truth: that sometimes waiting is so not sweet.

Here are the stages of waiting for PLL to return now that the new season is right around the corner:

1. Realizing That Your Wardrobe Has Done A 180 Since A Was Revealed

When you found out that Charlotte DiLaurentis was Big A, you were rocking your fave summer cutoffs and flip flops. Now that it's January, you double check your coat pockets to make sure your emergency stash of gloves are there if you need them — which, considering the dropping temperatures, you most certainly will.

2. Deciding To Re-Watch Season 6A Because There's So Much You Forgot

You want to go into the new season with a clear head, but you also want to be the first person on Twitter to call out a major Uber A clue.

3. Stalking The Cast And Crew For Any Details On The New Season

You already figured out that Hanna was getting hitched from Ashley Benson's ah-mazing SnapChat story, and now that the new season is only days away, you're positive that more clues will be dropped.

4. Questioning Everything About Charlotte Being A

Well, there is an Uber A out there, right?! With only a few days until the new season, you're exploring absolutely every potential theory that could open up the possibility for a brand-new omnipotent villain. Was Charlotte really the end of the line, or was there more to her story than she let on?

5. Obsessively Talking About The Show To Anyone Who Will Listen

You might as well be Aria going through an Ezra crisis, because you will not shut up about the show. The promise of a new episode in mere days has sent your brain into a full-on tizzy, and if you're friends can't hang with it, you'll just head to Tumblr.

With the show around the corner and no new information to speak of, you're seeking out anything you can possibly find about PLL, which includes some seriously dark theories about the show. Could Emily and Hanna be figments of Spencer and Aria's imagination? Could Pretty Little Liars be a story in Aria's deranged head? Whether you believe these theories or not, you're soaking them in.

7. Accepting That You Need To Chill Before The Long Awaited Tuesday

New PLL will be here soon enough and really, you're just making everyone uncomfortable.