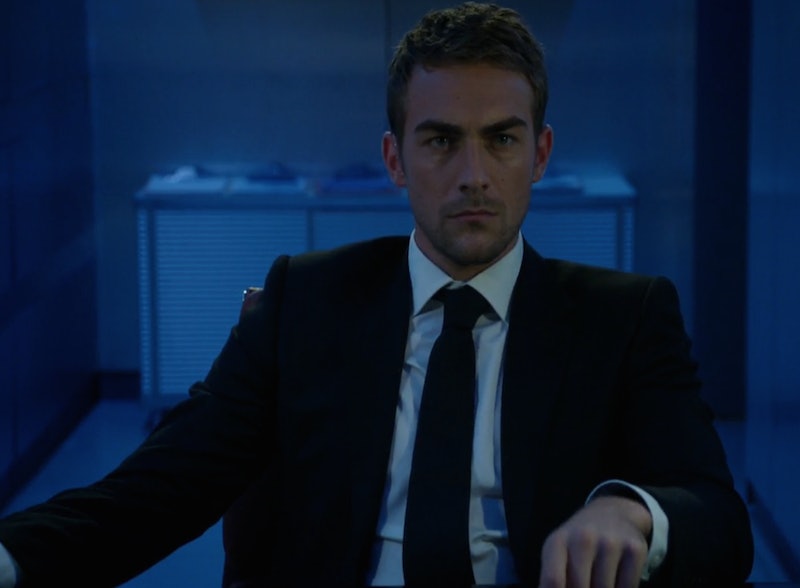 I wasn't aware that it's fairly normal for Royal bodyguards to leave their posts, but that's what E!'s The Royals has taught me. Bodyguard Jasper was missing from the Jan. 3 episode, "Be All My Sins Remembered," yet that may be because he is on a mission to discover what happened to King Simon on The Royals. Tom Austen's character often disappears for an episode or two — whether it's because Eleanor has gotten him arrested or because he has to go into hiding after getting freaky with the queen. However this time around, that sneaky Jasper was tasked by Prince Liam to keep investigating his father's death and based on the preview for the Jan. 10 episode "And Then It Started Like a Guilty Thing," it looks like the bodyguard's sleuthing is about to pay off.

In Season 2, Jasper has proven to be the good guy I always knew he was. Though fans found out what his original intentions were with getting a job at the palace (diamond heist? I gotta says that's pretty weak), he has shown that he is legitimately in love with Eleanor. Now that his secret has been revealed, I trust Jasper 100 percent with being the man who will discover that Lucius didn't kill King Simon — and that head of security Ted Pryce may have been behind the murder.

Every time the man from Domino claims that Pryce was responsible for King Simon's murder, Pryce neither confirms nor denies the statement. Because of that, I'm hesitant to say that Pryce (you know, Liam's ex-girlfriend's dad and devoted Royal Security head) is completely guilty, but he absolutely knows more than he has told Jasper or Prince Liam. Luckily, with Eleanor's rejection of Jasper after the whole diamond incident with Mandy-Samantha, Jasper has had time to do some solo investigating into the king's murder. And, he discovered that on the night that King Simon was stabbed, Lucius was walking the hallway outside of Eleanor's room. Jasper's stalking of Eleanor finally came in handy!

Pryce coerced Lucius to confess to the murder of King Simon to ease the mind of the kingdom, but the Royal Family was not satisfied that Lucius was actually the killer. While Helena is convinced that Domino was behind Simon's death, Liam believes Dominique that her family had nothing to do with it. Whether Domino is completely innocent of this crime is yet to be seen, but Jasper is at least going to confront the number one suspect — Pryce — in "And Then It Started Like a Guilty Thing."

The tiny problem with Jasper, though, is that he hasn't built the best reputation for himself when it comes to Eleanor — and it looks like in the preview Eleanor is going to tell Liam about how Jasper initially came to the palace to seduce her and steal a diamond. Even though Jasper has been doing Liam's bidding and is finally putting the right murder puzzle pieces together, Liam is likely going to be displeased with Jasper's treatment of his twin sister, as demonstrated by Liam punching him in the preview.

But, like Queen Helena, I'm rooting for the bodyguard, so I have hope that Liam will get over his anger toward Jasper when he hears that Pryce knows something about Simon's murder — and that Pryce may even have killed the king himself. And, maybe Eleanor will even (slowly, very slowly) begin to forgive Jasper too. A fangirl can dream, can't she?