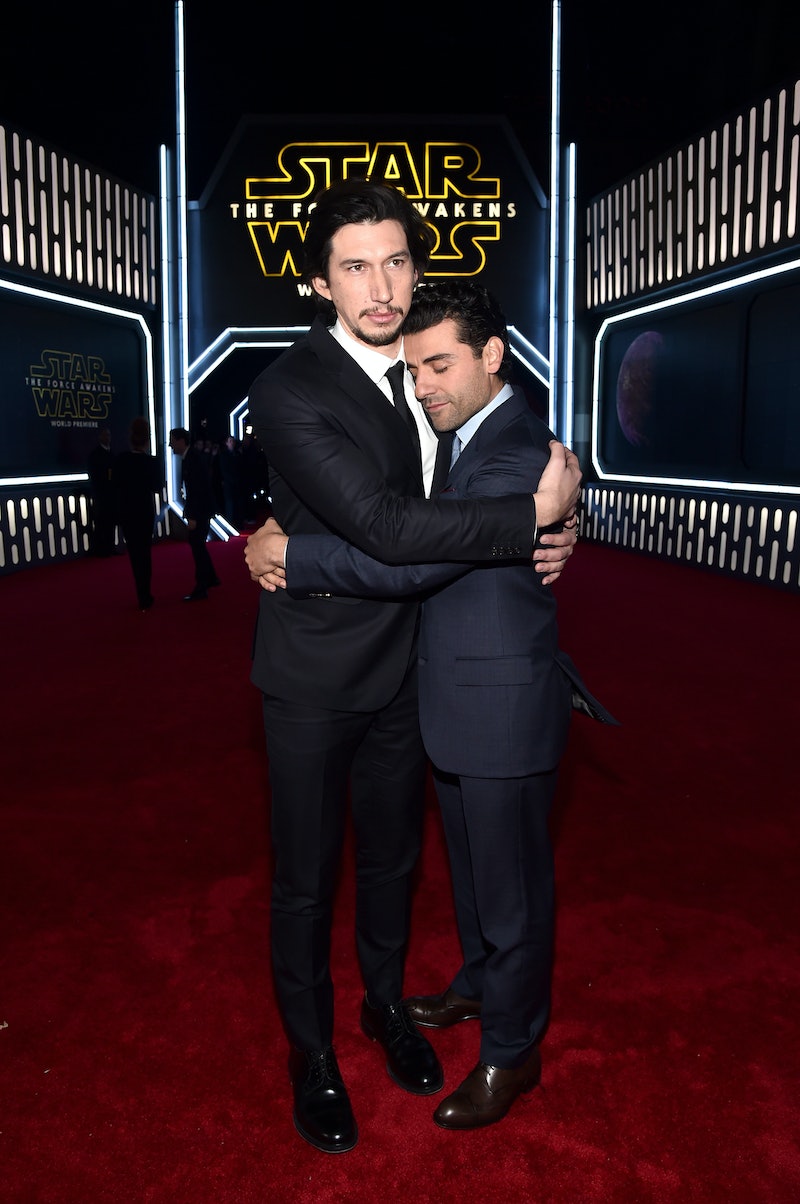 There's no doubt the Star Wars: The Force Awakens cast has already done more than their fair share of press. Franchise newbies Adam Driver, Daisy Ridley, John Boyega, Oscar Isaac, Lupita Nyong'o and Domhnall Gleeson have traveled the world multiple times over to promote the blockbuster movie, doing countless interviews and posing for photos. No one could accuse them of not being in the spotlight. Still, I think I speak for all fans when I say, we want more. More of John Boyega's enthusiastic interviews, more of Oscar Isaac being 100% swoon-worthy, more of Lupita Nyong'o's stunning fashion sense — we want it all. And, with awards season just around the corner, I'm hoping that the Star Wars cast will be at the Golden Globes, the first big show airing this Sunday.

Sure, Star Wars: The Force Awakens isn't nominated for any awards this year, and it's not like the stars need to show up to promote the film as TFA has already broken countless box office records. The odds of a full Force Awakens cast reunion seems unlikely. However, there is hope. The first batch of Golden Globe presenters were announced this week, but no one from the Star Wars world has yet to land a spot on the list. So far, presenters include Mel Gibson, Jamie Alexander, Patricia Arquette, Eddie Redmayne, Kate Hudson, Amber Heard, Bryce Dallas Howard, Helen Mirren, Julianne Moore, J.K. Simmons, Channing Tatum, Kurt Russell and Olivia Wilde. Still, don't rule the cast from coming out — there are still more presenters yet to be announced.

Supposing the entire Star Wars cast doesn't show up specifically to support The Force Awakens, it's still likely that a majority of them will appear to support other projects. Isaac, for one, is nominated for a Best Actor in a Limited Series or TV Movie for his performance in HBO's Show Me A Hero, so it seems like a safe bet that Golden Globe viewers will get a glimpse at their favorite Resistance pilot. None of the other Force Awakens cast members are nominated for a Golden Globe, but Gleeson's Brooklyn co-star, Saoirse Ronan, is nominated for Best Actress in a Drama. Brooklyn is currently making a run at the Oscars, so odds are good that Gleeson will also be in attendance. It also doesn't hurt that Isaac and Gleeson also starred together in Ex Machina, a film that is also considered a dark horse at the Oscars, and for which Alicia Vikander is nominated for Best Supporting Actress. Alright, so Poe Dameron and General Hux will, most likely, be at the Golden Globes. But what about the others?

For the past few years, Driver's television show Girls has had its own table at the Golden Globes, but HBO's comedy series failed to earn any Globe nominations this year, making it a bit less high profile. Still, Girls is a fan favorite, so it's possible Driver will attend as part of the Girls coalition if he isn't already attending as a presenter or Star Wars' newest villain. Nyong'o does not have a movie in the running for the Golden Globes, but as a style icon and Awards show darling from her breakout year with 12 Years A Slave, my money's on her showing up and owning the red carpet. As for Ridley and Boyega, I'm thinking that at least one of them has to show up. It's their first big movie, they've got to be curious about the Globes. (I'm also hoping that Boyega will be asked to present, because man, is he charming.) Finally, it's very likely Gwendoline Christie, aka Captain Phasma, will rock the Golden Globes as Game of Thrones is nominated for Best Drama Series.

Then there's the original Star Wars mega-stars, Harrison Ford, Carrie Fisher and Mark Hamill. Out of the three, I'd say that Ford and Fisher are most likely to be asked to present, but Ford always seems uncomfortable when speaking at awards shows. Hopefully Fisher will be there, if only to drop some of her hilarious knowledge on the red carpet. (Carrie Fisher, you are an American treasure.)

Well, that takes care of the Star Wars actors, but, the jury's still out on whether or not the film's real star, BB-8, will roll down the red carpet like the boss that he is.