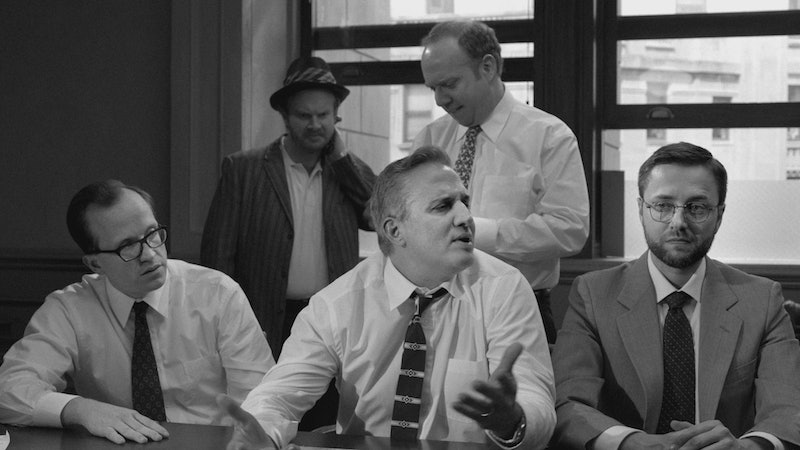 I'm not naive enough to think that very close-minded, misogynistic people turn to Comedy Central to watch Inside Amy Schumer, but if I could make them watch just one episode of Amy Schumer's show, it would have to be the Inside Amy Schumer parody of 12 Angry Men . The May 5 episode, entitled "12 Angry Men Inside Amy Schumer," has 19 minutes of the 21.5-minute show dedicated entirely to the spoof of the classic film. But rather than the 12 angry jurors debating whether or not an 18-year-old boy should be found guilty of murdering his father, Schumer's jurors are deciding whether or not she is hot enough to be on television. Aaaaaamazing.

Taking her half-hour comedy show (that usually features sketches, street interviews, stand-up comedy, and a one-on-one interview) and making the vast majority of it a spoof of an almost 60-year-old movie could have been a disaster. Making that movie one that most of us barely watched when our high school civics teacher made us sit through it was even riskier. Yet, the black-and-white mini-movie is innovative and inspired (which is saying something for a show that is typically breaking boundaries). So it's without a doubt that "12 Angry Men Inside Amy Schumer" will join the other bold, feminist Inside Amy sketches that have been dominating her third season in the winner's circle.

Although the topic the jurors were debating — "Is Amy Schumer hot enough to be on television?" — may seem a little late with the show being in Season 3 and Schumer starring in a new Judd Apatow movie, Schumer does face a lot of criticism about her looks. And by having the entire episode revolving around men (all talented with varying degrees of attractiveness) acting like they have a right to sentence her based on her appearance continues the theme that Inside Amy's third season has been working with. And though not every one of her feminist sketches has been near perfect (take "Cool With It" for example: both messages of women pretending to be OK with things like strippers to not turn off men and the wage gap are things I can get behind, but the sketch seem scattered), "12 Angry Men Inside Amy Schumer" was so excellently executed that no one — feminist or not — can deny its hilarity and truthfulness.

Like she did with the Season 3 premiere sketch featuring Julia Louis-Dreyfus, Tina Fey, and Patricia Arquette, "Last F**kable Day," Schumer is reiterating that women are not here just for men to consider whether they're acceptable sexual partners: John Hawkes, in Henry Fonda's Juror #8 role from 12 Angry Men, makes it his mission to prove that Schumer could conceivably be considered attractive enough to be on television. The other 11 jurors are disgusted at this idea and are left wondering why there isn't a Kate Upton sitcom or a Megan Fox talk show.

Of course, Hawkes (who is joined by heavy hitters Jeff Goldblum, Paul Giamatti, and Mad Men's Vincent Kartheiser) is the hero of the sketch, yet he is trying to logic a completely problematic topic. As he points out, Kevin James isn't "protagonist hot," but as Juror #3 (Nick DiPaolo) exclaims, "I don't need to think about f**king him." And there, my friends, lies the problem.

Many men have been trained to think that women must obtain a certain level of attractiveness, while men aren't held to the same standards (see Schumer's "Girl, You Don't Need Makeup" sketch). I'm not saying I am completely innocent when it comes to judging looks of people in the entertainment industry, but the disparity between how women are judged versus how men are judged is too great. Just this Feb., writer Jeffrey Wells wrote about Schumer's new movie Trainwreck, "...there’s no way she’d be an object of heated romantic interest in the real world." I'm sorry, WHAT? She responded in kind by posting a sexy photo on Twitter. And although girl looks absolutely fabulous, part of me wishes she didn't have to prove how attractive she is since the whole point is that she kind of shouldn't need to at all.

So, sure. Some folks could argue that the premise of "12 Angry Men Inside Amy Schumer" is a topic that doesn't need a full episode devoted to it, but the media (and the people who consume the media) haven't progressed past the point of judging women more on their looks than their merit. With a spot-on parody of 12 Angry Men, a hilarious dildo scene, laugh-out-loud moments of commentary on Schumer's appearance (girl knows — and embraces — how to make herself a punchline), and movie star-level actors all in Schumer's corner, "12 Angry Men Inside Amy Schumer" is a sketch that will live on as a groundbreaking parody for years to come just like the film it's based on... even if the content doesn't crush your soul quite the way the 1957 version did.

More like this
Amy Schumer Is Actually The Other Kardashian Sister You Never Knew About
By Jake Viswanath
Sandra Bullock, Girlboss Extraordinaire
By Matt Harkins & Viviana Olen
Spice Girls’ Net Worth: The Richest Member Is Wealthier Than The Rest Combined
By Hugh McIntyre
Danny Boyle's 'Pistol' Explores The Extreme Highs & Low Of An Iconic '70s Band
By Rachel Mantock
Get Even More From Bustle — Sign Up For The Newsletter