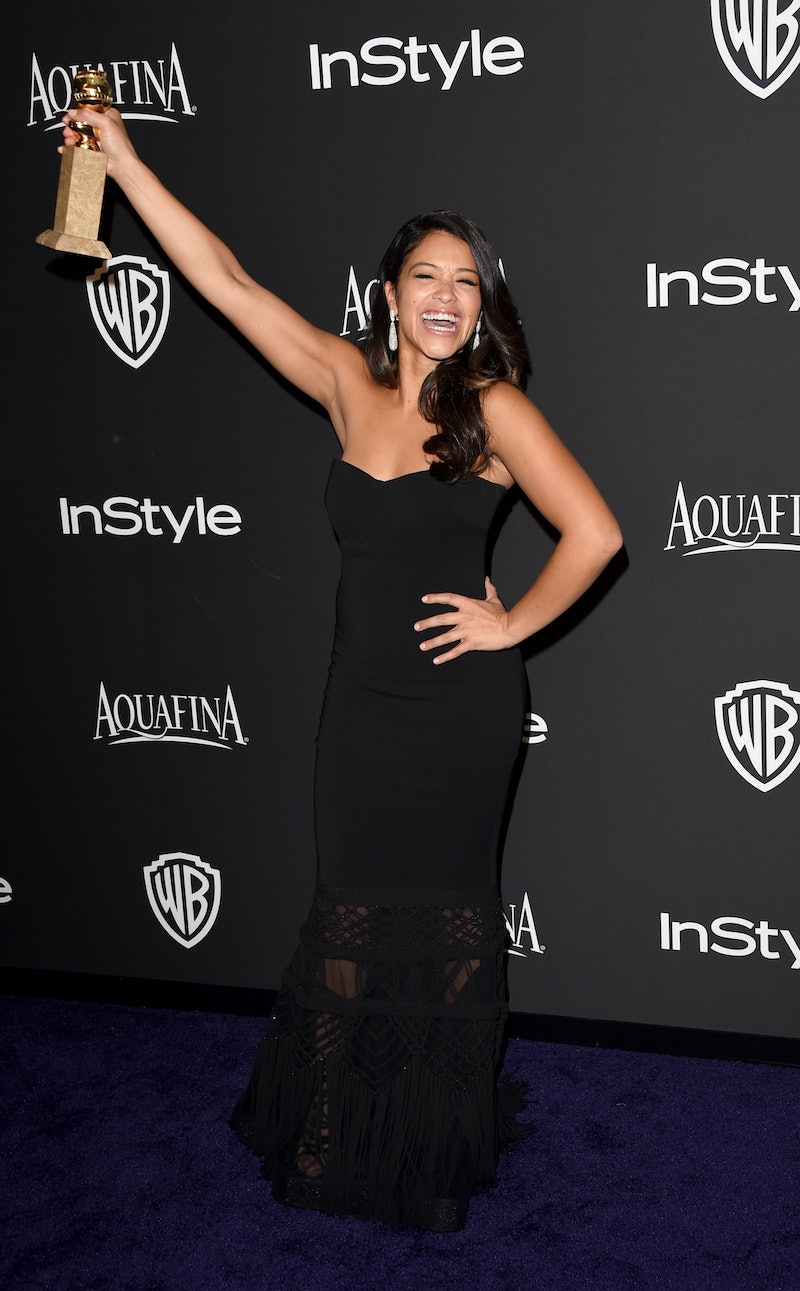 While the Emmys are all about TV and the Oscars celebrate movies, the Golden Globes are the perfect in-between. As Hannah Montana would say, it's the best of both worlds! But, naturally the 2016 Golden Globes nominations brought up a lot of questions. After all, this annual award show highlights the year's achievements in television and film. It's bound to be a memorable night, for sure. Last year's show brought Gina Rodriguez's teary acceptance speech for Best Actress in a Comedy Series. Plus, Tina Fey and Amy Poehler nailed it as co-hosts. Although fans will have to wait until January to see the actual show, the 73rd annual Golden Globe nominees were announced on Thursday, Dec. 10. Based on the nominations, it looks like there will be some serious competition.

Leading up to the big announcement, there were predictions galore. Would Netflix shows lead the pack in nominations? From Unbreakable Kimmy Schmidt to Orange Is The New Black to Master of None, the streaming service provided endless entertainment in 2015. What about Amy Schumer's Trainwreck? Would that receive critical acclaim it deserves? Luckily, it looks like all of the above is mostly true. (Minus Unbreakable Kimmy Schmidt, which unfortunately did not score any nominations. Such a snub!)

Even though the actual award show is a month away, there's plenty to ponder in the meantime. Here's a list of your most important questions, answered.

Who's Hosting The Golden Globes?

To my dismay, it's not Fey and Poehler again. The dynamic duo's hosting contract ended last year. Ricky Gervais is hosting the 2016 Golden Globes.

Wait, Has Ricky Gervais Hosted The Golden Globes Before?

Yes, good memory! This will be his fourth time. Gervais caused quite a bit of controversy when he hosted the show from 2010-2012. He reportedly vowed to never host again, but was approached by NBC and the Hollywood Foreign Press Association about it. According to Deadline, HFPA's President Lorenzo Soria said,

Ricky Gervais left us with a lasting impression and we are thrilled to have him back in our show as we honor the best in film and television.His off-the-cuff wit and quirky charm will surely have the room and audiences around the world at the edge of their seats.

What Movie Received The Most Golden Globes Nominations?

Which TV Show Got The Most Golden Globes Nominations?

As for the TV categories, there's no clear-cut leader. Several shows received three nominations, including Transparent, Fargo, and Mr. Robot.

How Diverse Are This Year's Nominees?

In 2015, the Golden Globes were slightly more diverse than the previous year — at least in terms of visibility for people of color and the LGBT community. However, there was definitely room for improvement. Based on the 2016 nominations, there actually seems to be quite a bit of diversity! For TV, Regina King (American Crime), Uzo Aduba (OITNB), Taraji P. Henson (Empire), and Viola Davis (How To Get Away With Murder) received nominations. Idris Elba received two nominations (Luther and Beasts of No Nation). Meanwhile, Gina Rodriguez scored a nom for Jane the Virgin, as did Aziz Ansari in Master of None . Plus, it's pretty awesome that Carol , a movie about a lesbian romance, leads the pack with five nominations. Transparent and The Danish Girl each received three nominations — which is worth noting, since both storylines focus on transgender characters.

While all of the above is wonderful news, there's still work to be done. I'd say the film categories could definitely use more diversity! Out of the 20 Best Actor and Best Actress nominees for Comedy and Drama films, there is only one person of color nominated — Will Smith in Concussion.

Are There Any Special Golden Globes Awards I Should Know About?

Who Decides The Golden Globes Winners?

The Golden Globes winners are voted on by members of the Hollywood Foreign Press Association. The HFPA is a non-profit organization of international journalists, based in Southern California. There are approximately 90 members.

Who's Won The Most Golden Globe Awards Ever?

Over the course of her career, Meryl Streep has scored eight trophies. As far as actors, Jack Nicholson has won six.

Jamie Foxx's daughter Corinne is this year's Miss Golden Globe. On the Golden Globes website, she said this about the honor,

Throughout the years I’ve grown up watching my dad establish himself as a well-respected actor. I’m honored that HFPA has given me the opportunity to now share the same stage where he’s been recognized for some of his greatest accomplishments.

So what exactly will she do? Corinne will assist with the ceremony. It's an annual tradition where the daughter or son of a famous actor participates in the show.

Who Got Snubbed In This Year's Golden Globes Noms?

Well, fans (including myself) were pretty disappointed that Ellie Kemper didn't score a nomination for Best Actress in a TV Comedy. Unbreakable Kimmy Schmidt was great! Fans of HBO's The Leftovers were disappointed that the show didn't receive any nominations either. Oh, and let's not forget Broad City ! Where is the Abbi and Ilana love? Plus, even though Amy Schumer received a Best Actress in a Comedy nom, she didn't receive any TV nominations for Inside Amy Schumer.

As for movies, The Suffragette didn't get any nominations — even for Meryl Streep. Brooklyn didn't score a nomination for Best Drama either. While these are disappointing, here's hoping the Oscars give them some recognition.

Why Wasn't My Favorite Movie And/Or Show Nominated?

There's a whole list of eligibility rules for the Golden Globes. But the gist of it all? Movies and TV shows had to be released during the 2015 calendar year, from Jan. 1 through Dec. 31, in order to be eligible.

Now the most important question of all — is it Jan. 10 yet?! I just want to watch the show now.