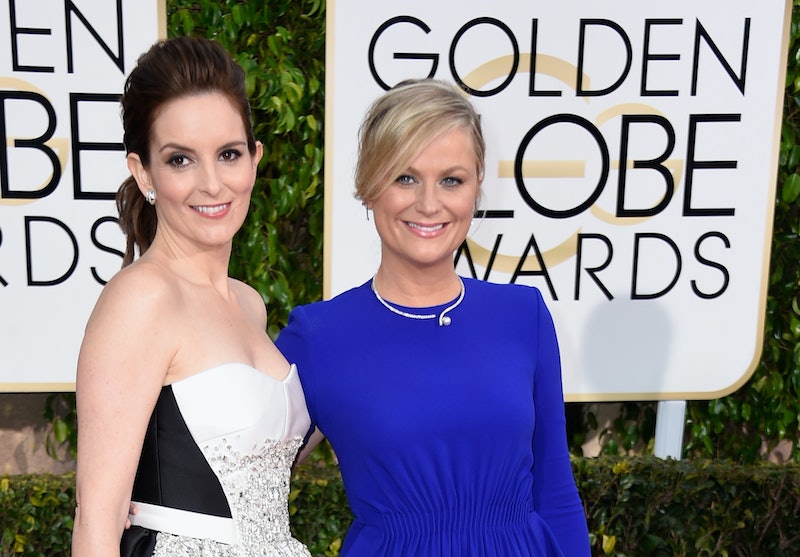 After three consecutive year of giggle-inducing bliss, Tina Fey and Amy Poehler are not hosting this year's Golden Globe awards airing on Sunday. Since I'm completely devastated, I decided to round up all of Tina and Amy's best Golden Globes red carpet and hosting outfits to placate all the sad feels I'm encountering. While I'm sure Ricky Gervais will do a totally great job, I'd be lying if I said I wasn't just a little bummed.

And though I wish the duo would change their minds and come back to do the awards show forever and ever, the mega-talented ladies have been super busy! Fey and Poehler's latest feature together, Sisters, premiered on Dec.18, the two just hosted SNL again (and yes, even did a beloved Weekend Update!), and Fey's latest film, Whiskey Tango Foxtrot , debuts on March 4.

Despite Fey and Poehler not taking the lead on this year's awards, the rest of the Bustle team and myself are still totally stoked for the show and you should be, too. To get yourself pumped, refresh your memory with the most awkward Golden Globes moments ever, our 2016 Golden Globes winner predictions, and all the raddest hair moments from the 00's Globes.

And without further ado, please enjoy all the happy bestie fashion feels you get from scrolling through Fey and Poehler's amaze Golden Globe outfits over the years!

Fey and Poehler rocked an adorable complementary black and white ensemble their first year hosting together in 2013. Also, can I borrow those shoes, Amy?

Poehler swapped her chic suit for a majorly sparkly dress when she hit the stage.

Also. This happened. I can't decide which outfit I'm more excited about.

And then Fey added some sparkle, too! I love, love how well the colors played off of each other.

The two also rocked complete stunner gowns in 2013 that were drama to the max. That blue. Hot dang.

Fey and Poehler kicked off 2014 wit a bang in another set of complementary, but uniquely distinct gowns.

Then the pair changed clothing, but kept their looks distinctly on the glam gown side.

OK, I know, this is a post-stage shot, but how awesome is that pop of white on Poehler's dress along with her dramatic chandelier earrings?

Possibly my favorite Globes looks of theirs so far, 2015 was a year where their dresses didn't obviously coordinate, but definitely looked stellar next to each other.

On stage, Fey kept up her black and white vibes, while Poehler opted for another dreamy winter hue.

Also, I lied. This look by far is my favorite for both of them. That sparkle tie on Fey and that stellar navy embroidery on Poehler is leaving me swooning.

And guess what, the stars also totally rocked some epic Golden Globes looks before they started hosting together. I know it's not Thursday, but who doesn't love a throwback?!

How incredible was Fey's vampy navy velvet look in 2011? I remember adding that to Pinterest the second I saw it.

Dang, I can't get over this deep rose red hue. And all that tulle.

Poehler went major ivory nude chic in 2012 and it will never be forgotten!

More like this
Harry Styles Went Shirtless In A Striped Jumpsuit At The Grammys
By El Hunt
Beyoncé Wore A Golden Sheer Gown At Her VIP Dubai Concert
By Sam Ramsden
'Love Island's Will Got A Farm Animal Manicure & It's *Adorable*
By Sam Ramsden
8 Bennifer Outfits That Stand The Test Of Time
By Avery Matera
Get Even More From Bustle — Sign Up For The Newsletter
From hair trends to relationship advice, our daily newsletter has everything you need to sound like a person who’s on TikTok, even if you aren’t.