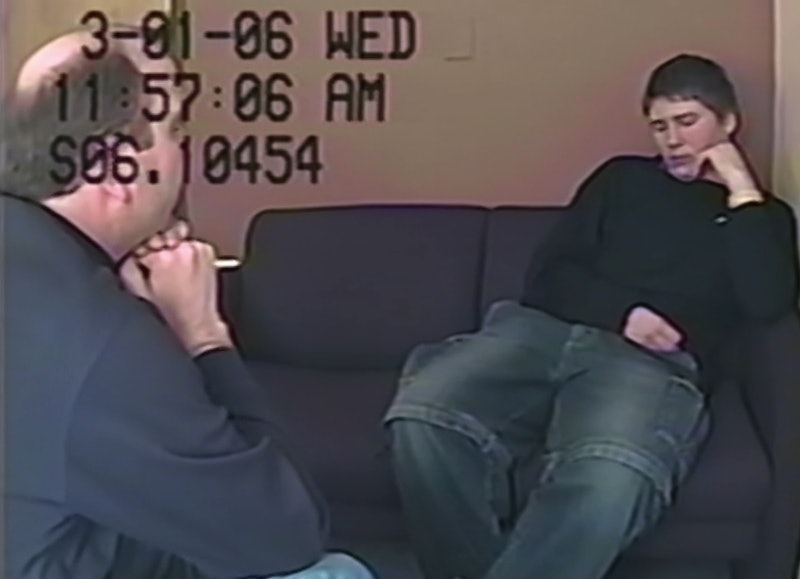 Making a Murderer is causing a lot of outrage due to the trial of Steven Avery in the murder of Teresa Halbach. But even more outrage is being directed toward the case of Avery's young nephew, Brendan Dassey, who said in his confession as seen in Making a Murderer that he was inspired by the book Kiss the Girls. After a number of confessions by the teenager, Dassey was put on trial for assisting his uncle in the brutal rape and murder of the Auto Trader magazine photographer. Dassey later recanted his confession and said he had based it on the 1995 James Patterson novel, Kiss the Girls .

In Episode 9 of the Netflix docuseries, Dassey's defense lawyer said during the trial that there was no physical evidence linking Dassey to the murder of Halbach. When Dassey took the stand, he said he didn't witness his uncle murdering Halbach and may have made up the details of what happened at Avery's trailer based on a book. One of the prosecutors incredulously asked the 17-year-old, "What book that you read ever had the story of a woman chained to a bed, raped, stabbed, and then her body thrown on a fire? What book was that, sir?" And Dassey's response was, "I believe it was called Kiss the Girls."

Dassey's multiple confessions were contradictory, and it's fascinating to see if what he claimed his uncle and him did actually does sound like something that occurred in Patterson's Kiss the Girls. The novel Kiss the Girls is quite different from the 1997 movie Kiss the Girls (which starred Morgan Freeman and Ashley Judd), but they both follow Alex Cross as he investigates the disappearance of his niece. Along with a number of other women, Alex's niece and the character Kate McTiernan are held hostage in an underground lair of the sexually violent Casanova. Casanova also sadistically works with another killer who goes by the name the Gentleman Caller.

In the prologue of Kiss the Girls, the Gentleman Caller torments a young couple by a lake — and slits the throat of the man. Patterson wrote:

Blood was gushing out of his throat and spreading through the lake water. A terrible fear, a feeling close to panic, gripped him. Horrified, he felt his throat again and found the knife embedded there.

During Dassey's troubling March 1, 2006 confession with investigators Tom Fassbender and Mark Wiegert, the teenager said that his uncle and him went into the bedroom where Halbach was. Dassey then said:

"We went in there. We tied her up and he stabbed her and he told me to cut her throat and cut her hair off."

It is a leap to claim that Dassey made up that Avery told him to slit Halbach's throat just because of Kiss the Girls — especially since the circumstances were different in the novel than they were in real-life. However, violence against women is depicted in other parts of the book.

In Chapter 3 of Kiss the Girls, there is a terrible passage of Casanova leaving a woman for dead in the woods that goes:

"Her arms were behind her and tied around a tree. Her legs were crossed and bound, and she was still tightly gagged. He had taken off her clothes. She didn't see her clothes anywhere."

Dassey's description of Halbach being tied up was yet again a bit different from the description in Kiss the Girls. Dassey, with assistance from the investigators, said that Avery had Halbach:

"... chained up to the bed and she's faced [sic] up" with no clothes on, her legs spread "a little bit" apart, and handcuffed to the bed by both her arms and legs.

But after that, the similarities don't go much further. Dassey claimed his uncle shot Halbach 10 times, which is not an incident that happens in the book. Nor are any bodies burned in Kiss the Girls. The comparisons between the book and Dassey's confession were nowhere close to as striking as I thought they'd be, except for the shared theme of violence against women.

So for those of you out there who believe Dassey to be innocent, the analysis of the quotes from the book and the quotes from Dassey's March 1 interviews may be a bit disappointing. You can watch Dassey's full confession yourself (there are some technical difficulties at the end of part one) below in three different videos.

That being said, in a particularly graphic scene in Kiss the Girls, the protagonist Kate is raped. Patterson wrote:

"[Casanova] was all over her. Flailing arms and legs, all of his weight pressing down on her. ... With a desperate effort she managed to kick out one leg, but she couldn't move her arms. Her chest was on fire. She could feel him ripping off her blouse, touching her all over."

In the taped interrogation, Dassey told the investigators about his uncle raping Halbach, saying:

"That he ripped off her clothes and she refused and she tried to get away, but he was too strong for her. And he did it ... raped her."

Because of the documentary, the public is conflicted on whether or not Dassey is a murderer. He was convicted of the crime in 2007.