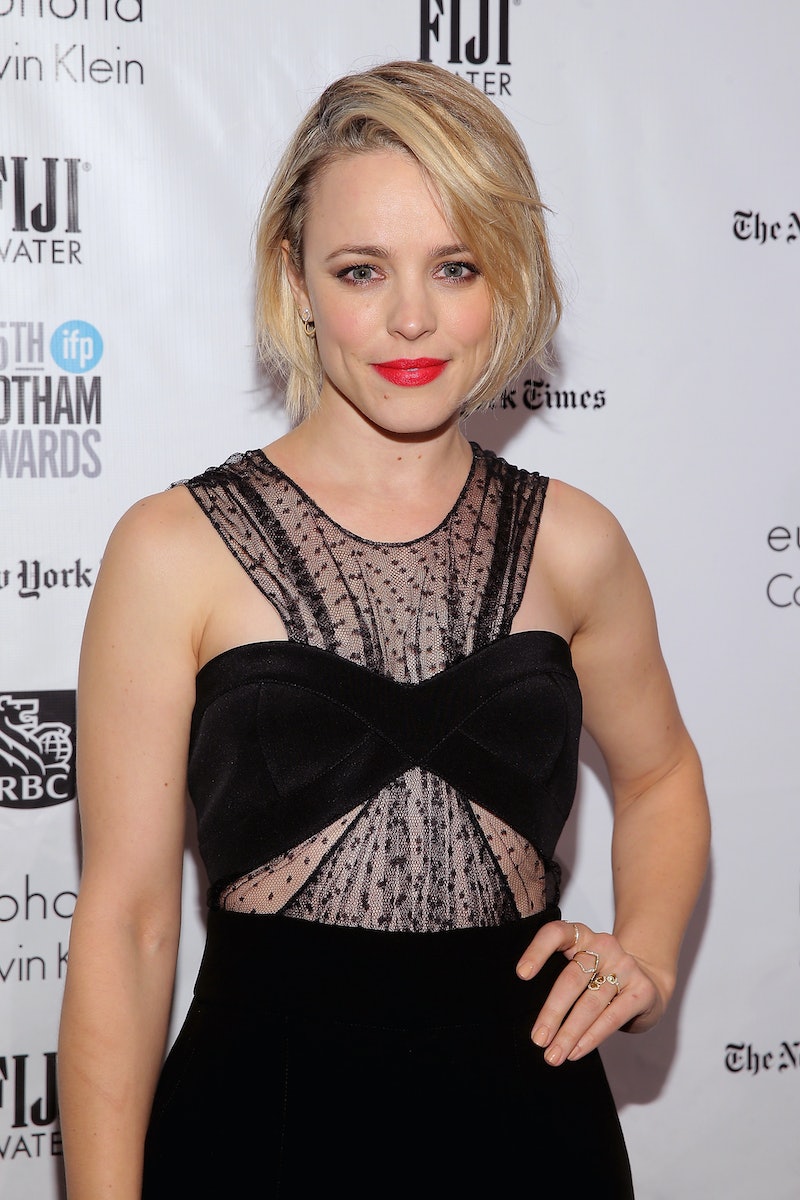 It's no secret that I'm a major Rachel McAdams fangirl. Morning Glory is one of my all-time favorite movies, and there's no one else who could've played Regina George in Mean Girls, full stop. That's without mentioning that she pretty much embodies back-to-back #hairgoals, and her True Detective Season 2 hair style is currently still at the top of my wish list. Despite the pretty major bias I have favoring basically everything she does, though, there are still several very legitimate reasons why Rachel McAdams deserves an Oscar nomination for her most recent film Spotlight (the noms will be announced on Thursday, Jan. 14, FYI).

As an actress, McAdams continues to take roles in just about every genre, transforming herself unexpectedly, and Spotlight is no exception. In a male dominated movie, McAdams excels as investigative journalist Sacha Pfeiffer, part of a team at the Boston Globe who, in 2002, broke a major story regarding a sexual abuse cover-up in the Catholic Church. McAdams is amaze in an ensemble cast, which also features Mark Ruffalo, Michael Keaton, John Slattery, Liev Schreiber, Stanley Tucci, and Billy Crudup. The Notebook actress puts in an incredible performance, in a role which not only deals with hard-hitting material, but requires she get the balance right between journalist, investigative reporter, sensitive interviewer, and understated badass.

McAdams has yet to receive any Oscar nominations, despite working with acclaimed directors, like Terrence Malik for To The Wonder. Arguably, her role in Mean Girls is Oscar-worthy (fight me on that, if you like!), but as of yet, McAdams hasn't garnered any serious award glory. Hopefully, that's about to change.

Spotlight has been picking up nominations from the likes of the Golden Globes and the Independent Spirit Awards. It seems likely that the movie will make it into several categories at the Academy Awards, and, if her performance is anything to go by, McAdams could be in with a real shot. Here are seven reasons that McAdams should get an Oscar nomination in 2016!

Whether she's taking on Sarah Jessica Parker in The Family Stone or standing up to Harrison Ford in Morning Glory, there's nothing that McAdams can't do.

2. There's No Genre She Can't Tackle

From Woody Allen films to sci-fi love stories (The Time Traveler's Wife) to horror (Red Eye) to comedy (The Wedding Crashers) to Sherlock Holmes movies, McAdams is ready for anything her job throws at her.

McAdams played one of the most legendary onscreen characters of our time. Be serious.

Even if the subject matter is hard-hitting, McAdams is always up from the challenge. Her growing fearlessness as an actor is what's bringing her to the forefront right now, and her incisive choices show that she's versatile and brave.

7. In Spotlight, She Holds Her Own Opposite Legends

McAdams has played opposite some incredible actors, and Spotlight showcases a whole host of Hollywood royalty. She's totally au fait in the presence of the greats, because McAdams is a legend in the making.

I think that's all pretty conclusive, TBH. I'll just have to wait and see if anyone else agrees when the Oscar nominations get announced on Jan. 14. I'm crossing all of my fingers for McAdams, and rewatching The Wedding Crashers, because it's a total classic!