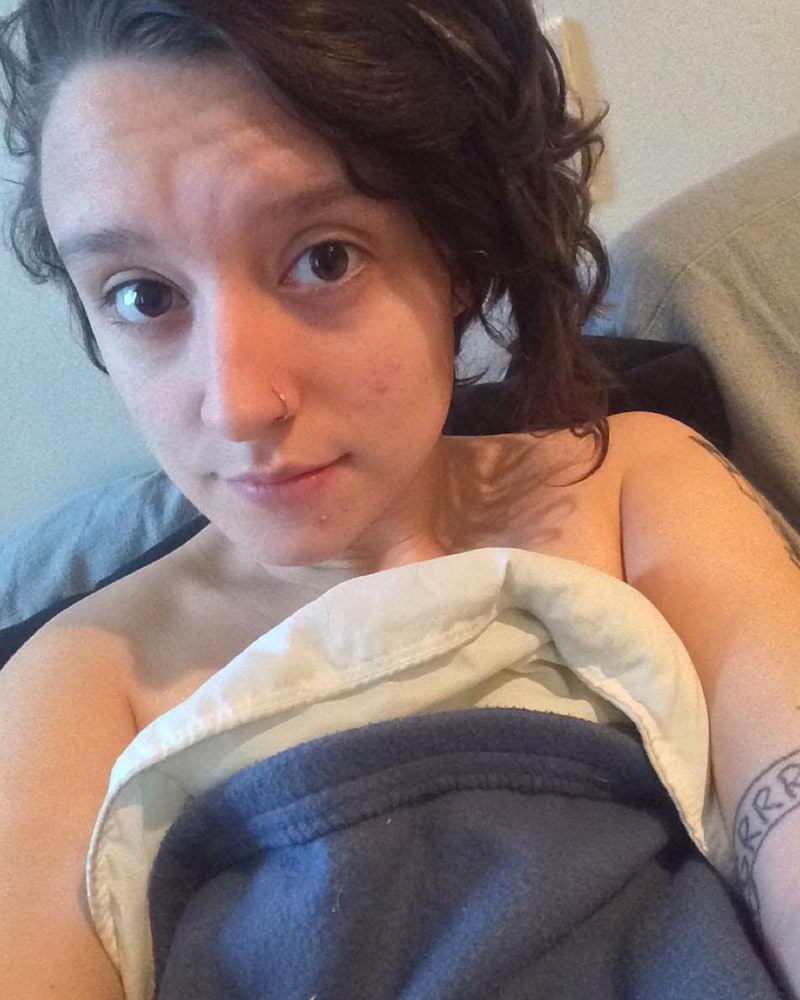 Over the past seven days, I sought to be my most body positive self in the form of tweets, shares, and comments. And let me tell you, it was no easy feat. When I initially took upon a challenge to be body positive on social media for a week, I didn't think it would be very hard. That was until I realized that, although I am chock full of body positive messages and the desire for all queers to love themselves, much of what I usually post has nothing to do with those things.

I normally don't take such great lengths to spread body positivity on my social media accounts. In fact, I use Facebook, Twitter, and Instagram pretty sporadically, regardless of what I'm talking about. But I noticed that when I do, the majority of my posts are usually negative. As an angry feminist and genderqueer person, I can't help but criticize and call out problematic behaviors and representations in media. However, when all the content you're producing is critical, it starts to make the environment feel a bit more militant than you might want, especially for someone who writes almost exclusively about loving yourself.

After participating in this experiment, I definitely want to apply some of what I used and learned over the past week to help make my social media presence that much more positive and encouraging. So without further ado, here is how my seven-day body pos journey went, and I what I learned along the way.

Day 1: Getting Warmed Up

I initially found it difficult to determine where I should begin my hyper-body positive week. However, my first instinct was pointing me in the direction of selfies. I believe taking and sharing selfies — which is essentially a documentation of the self — is one of the boldest and most effective methods for achieving body positivity. So I decided to do a selfie series on my Twitter account over the course of the week, starting with "First Draft Selfies."

The phrase refers to the first photos you snap during a selfie sesh, and usually the ones that get deleted from your phone once you get the perfect shot. So on Day 1, I shared the first four pics I captured during my latest personal photoshoot. Admittedly, I was a little nervous doing this. There's a reason these photos are "first drafts." However, after posting them (and looking at them again now), I realize there's nothing to be embarrassed of. I look cute AF, just like I do in every other selfie I take.

But then, I got a little discouraged. When I shared the idea of first draft selfies with a writers' group that I'm in, there were hardly any responses. Except for the random dude who messaged back and was clearly not getting the point of my body positive challenge, saying, "Only good [selfies] are with others and potentially while drinking." OK.

However, sweet responses from the people of Twitter, like the one above, made my day and assured me that the body positivity I was trying to generate online was reaching somebody.

Day 2: The Power Of Good Karma

On the second day, I decided to tackle one of my greatest insecurities: showing my teeth in photos. I've been pretty self-conscious about my teeth for much of my life, and do whatever I can to conceal them when taking a photo. However, I thought that confronting a very real insecurity of mine, and therefore executing a body pos move that had the potential to serve me in my own journey, was better than trying to cater to what I thought others might want to see. As soon as I made that decision, the experiment became even more meaningful to me.

Next, I took to Instagram to spread the love. I don't normally comment on the photos of others, even if I really admire something about the image or the makeup the subject is wearing. But I decided to try speaking up when I was thinking something and nice and complimentary, commenting on the photos of friends and strangers alike in praise of their amazing eyebrows or beautiful lipstick applications. It felt so good to evoke body positivity in that way, and felt just as rewarding as it can be to pay someone a compliment IRL.

And then the magic happened. The good karma that I generated that day on Instagram came back to me when two angels (who have read my stories on Bustle) paid me some sweet compliments in the comments section of my latest photo. The power of being more body pos on social media, both for personal growth and for spreading some love, became very apparent by the end of Day 2. I was renewed with energy and hope for the rest of this experiment.

I started the third day with some Twitter selfies, this time of the "sexy" variety. Taking sexy photos of myself, or intentionally being over-the-top raunchy in selfies, is one of my favorite ways to evoke body positivity. I love expressing my sexuality, and I think it's important to show feminine people unapologetically feeling themselves to spread the message of sex positivity and loving your nude, sexual body.

I then sought out to make my IG feed more body positive, taking tips from Bustle's Amanda Richards' "15 Feminist & Body Positive Social Media Accounts You Need To Follow In 2016" to help me choose some body pos accounts to explore. Perusing the "following" lists of some of my other body positive friends was also helpful in my search to expand and diversify my feed.

I ended the day with a Twitter rant about a weird moment of body negativity I experienced via my parents expressing congratulatory sentiments over my weight loss, which happened as a symptom of disease. Typing it out made me feel better about my own body after that situation, and it felt good to share something that others might connect to as well.

For months, I have refrained from sharing my stories on Facebook, mostly because of the hyper-critical mob of classmates that takes pleasure in criticizing and making fun of them. The way I let a handful of rude people chase me off of Facebook has irritated me for some time now, so I thought this was as perfect time as any to start posting my articles again.

I decided to share "The One Body Positive New Year's Resolution You Should Be Making," wherein I discussed my struggle with hiding from my body's ailments as well as my responsibility to take care of myself. Posting this story would mean staying true to what I wrote, and no longer hiding the fact that I struggle with a chronic illness. I was a little scared when I hit "post," but was relieved when others who deal with chronic pain commented, having clearly felt connected to the story. It felt good not to isolate myself as much, and just come out about what I was going through — if for nothing else than to relate to others going through similar experiences.

Admittedly, the day felt daunting, especially since I delved into some real sensitive territory for the good of my body positivity. But by night, I was rewarded once again with a little dose of karma when Tyler Ford shared my story about queer visibility on Twitter. Boy, did I feel like the most visibile queer being acknowledged by such an amazing activist and artist. I posted some silly selfies on Twitter, and called it a day.

The fifth day was mostly dedicated to exploring more body positive topics and accounts on multiple platforms of social media. I read about body pos for men, Carrie Fisher fighting against ageism for older women, and one woman's story about taking a polar "bare" plunge. I found Jessamyn on Instagram, a fat body positive yogi, as well as Adriene Mishler's yoga camp series. Between the latter two, I felt so inspired to enact a little body positivity in my IRL life, and tried some new yoga routines following their respective videos. It was amazing, and is something I continue to practice daily.

Scrolling through my spruced up feeds, I felt relieved in knowing that my community of support and tools for body positivity were ever-expanding.

I posted my selfies to Twitter (this time, my fave selfies from 2015), and turned in for the night.

By the sixth day, and after absorbing so many other perspectives on body positivism, I was beginning to run out of ideas. I turned to fellow fashion and beauty writer Liv Burke's tips on being more body positive on social media. Using that advice, I decided to confront my fear of presenting without filled-in eyebrows, and posted "no makeup" selfies to both Twitter and Instagram. Both were met with sweet responses, which quickly added to my growing body positivity.

My sister encouraged me to post a selfie of myself doing yoga. This was the perfect idea since I've always felt terribly insecure about my body in motion. However, I found the limits of my body positivity this week when I ultimately opted out of posting it. There's always room for improvement.

After seeing so many different body pos activists share very specific messages, many of whom have a very focused "brand," I began to question what my own "brand" might be. Body positivity affects so many parts of my being, but I seemed to momentarily forget that my intended audience has always been the queer community.

So the theme of the last day's selfies essentially became "genderqueer hairy alien," and I shared my story about making body positivity more inclusive to queers and trans/gender nonconforming folks on Twitter. The overwhelming response that the post got reaffirmed my identity and voice within the body pos community, since I had previously felt a little all over the place.

This seven-day experiment reminded me to stay true to myself and my experiences, even if the scope of conversation is so broad and multi-faceted that it can sometimes feel overwhelming. We can't be everything to everyone, and that's OK. But leaving positive comments on posts more often, as well as posting more selfies, are some great places to start on your own journey.

But above all, the best way to be body positive on social media is to stay true to yourself and your own quest for self love. Only when you are truly authentic and honest with your messages can you connect with your followers and the world around you. And then there's always that awesome body pos karma that will further rewards you for your good work.