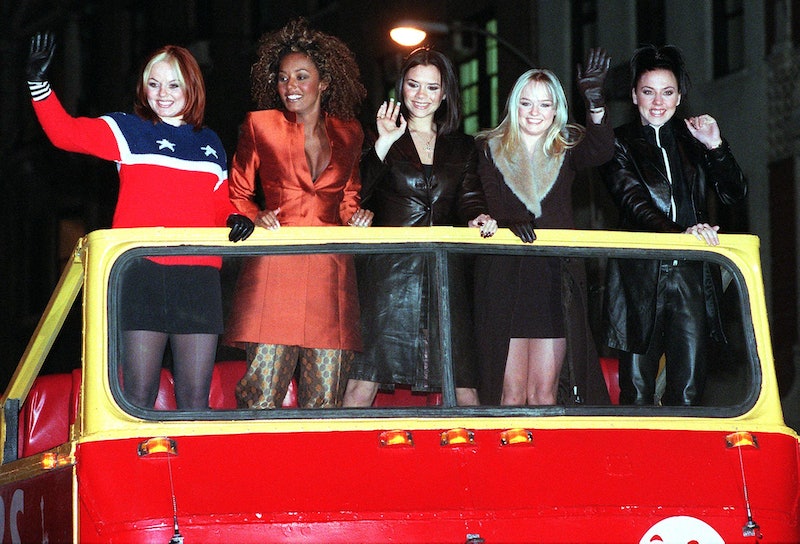 On the same day that news broke about One Direction potentially breaking up for good, the highly anticipated Spice Girls reunion rumors may have come crashing to a halt. Seriously, has the music industry turned upside down in just 24 hours? Is all hope of happiness lost? No, no, no! Let's take some deep breaths and assess what happened. According to TMZ, Victoria Beckham's rep says Beckham will not be appearing with the Spice Girls now or in the future. Yikes! The rep explained further that Beckham, aka Posh Spice, "has been very respectful about the fabulous time they had together in the past, however her focus is now very much her family and fashion business."

Honestly, if this news is true, it's pretty devastating. After all, most people wouldn't even know Beckham if it wasn't for her start in the Spice Girls. Would she really turn her back on her peace sign-throwing, "girl power" preaching bandmates? It's hard to believe, considering just a few weeks ago, Mel B. added fuel to the reunion rumors while on a talk show. She said,

I think I'm the one putting all the rumors out there. To be serious, it is our twentieth anniversary this year and it would be rude not to celebrate. So hopefully something will be happening pretty soon…I can't tell you what it is yet.

I'm with Scary Spice on this. It'd be rude to not celebrate, and even more rude for Posh to leave her fellow "Wannabe" singers hanging. Here are a few reasons that I'm not giving up hope on a Spice Girls reunion just yet — and you shouldn't either.

1. There Could Be A Loophole

According to TMZ, Beckham's rep said she wouldn't be "appearing" with the Spice Girls. What if the reunion wasn't an actual tour, but some kind of documentary with a highlight reel of old footage? Or maybe there's previously recorded music that they'll release? It's a matter of semantics, but it could be possible that the rep just meant maybe she wouldn't be appearing on stage with her bandmates. (Honestly, I'm looking for any excuse I can here.)

2. Her Family May Convince Her To Change Her Mind

If the main reason that Beckham is against a Spice Girls reunion is because she wants to focus on family, maybe she'd be able to be persuaded by her kids. Who can say no to their kids? After all, the former bandmates reunited at her husband David Beckham's birthday last year and their son Brooklyn even took a selfie with the group. To me, it looks like the Spice Girls are practically family, so I could foresee her kids and husband hopping on the reunion bandwagon.

3. They've Gone On With Four Members Before

While it was all five ladies who performed at the 2012 Olympics, it hadn't always been that way. In 1998, Geri Halliwell (Ginger Spice) left the girl group. Essentially, she pulled a Zayn Malik and the band continued without her — at least for a little while. Although it'd be devastating to not have all five Spice Girls back in action, I'd settle for four. It's kind of like how Fuller House won't be the same without Michelle, but it'll still be pretty great.

Honestly, I think that last reason is the most plausible and it's what I'm clinging to until there's any further confirmation. Because really, it's too devastating to accept that a reunion may not happen. And if their Olympics performance taught us anything, the Spice Girls have a history of coming through for their fans.

More like this
The Spice Girls Just Dropped A Brand New Music Video
By Sam Ramsden
Kate Bush Revealed The Real Meaning Behind 'Running Up That Hill' Lyrics
By Darshita Goyal
What Does Nancy Jo Sales Think Of 'The Real Bling Ring'?
By Arya Roshanian
Netflix Reveals First Look At Wednesday In The 'Addams Family' Spinoff Series
By Bustle Editors
Get Even More From Bustle — Sign Up For The Newsletter