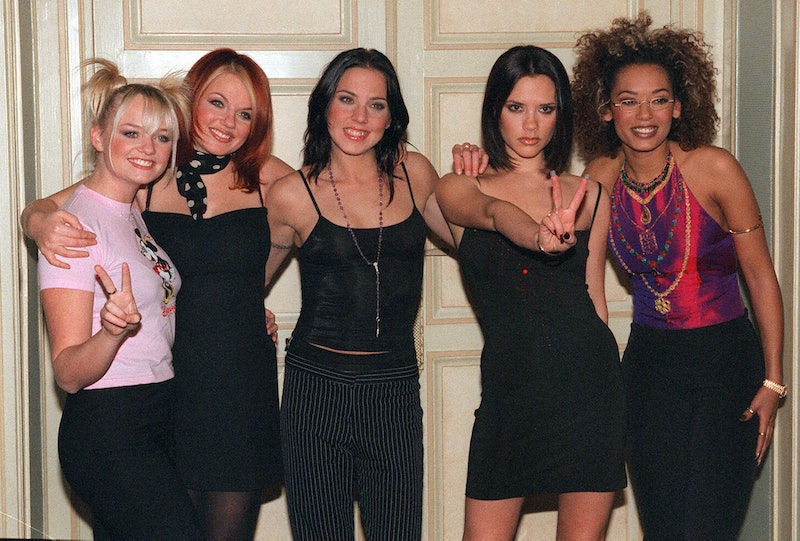 Earlier this year, Kim Kardashian revealed she dressed up as Posh Spice in a high school talent show. But the reality star isn't the only one obsessed with the Spice Girls. Most '90s girls can attest that "Wannabe" was their jam and they watched Spice World more times than they'd like to admit. (Or at least, I know I sure did!) Over the years, the girl group's mini reunions sparked major nostalgia among fans — whether their 2012 Olympics performance or David Beckham's birthday party. But it just wasn't enough. That's why it seemed like a dream come true when news broke that the Spice Girls may go on tour with the Backstreet Boys in 2016. Although these are merely rumors, Mel B (aka Scary Spice) hinted at the upcoming reunion and made it seem more likely than ever. On the U.K.'s Alan Carr's New Year's Spectacular, she said,

I think I'm the one putting all the rumors out there. To be serious, it is our twentieth anniversary this year and it would be rude not to celebrate. So hopefully something will be happening pretty soon…I can't tell you what it is yet.

Scary Spice is right — "Wannabe" turns 20 in 2016 and it would be very rude not to celebrate. Don't they owe it to the fans to hit the road again? Even Nick Carter made it seem like the reunion may happen when talking to E! News. The BSB singer said, "I think this would be the last hurrah—the two big groups from the late ‘90s. Maybe do a world tour, stadiums, stuff like that and do a package together."

I'm going to take this as a sign that a reunion may actually be happening. In which case, I'll let the Spice Girls speak for me! Here are the emotional stages of reacting to this very exciting news.

1. Looking Around To Make Sure You're Not Being Punk'd

Mel B's comment means they're definitely doing something, right? Like, this isn't a joke? It can't be.

2. Realizing This Is All You've Ever Wanted

It's like the Spice Girls really do know what you "really, really want."

3. Letting The Excitement Sink In

Take a moment to just bask in the good news.

An important order of business: Getting together a group of gal pals to see the tour (if it does happen). After all, the Spice Girls preach girl power.

7. Realizing How Mad You'll Be If The News Isn't True

Honestly, I would probably kick something if the news isn't true. That's how angry I'd be.

If a tour is happening, you'll want to have the choreography down perfect.

9. Waiting To See What Happens Next

It's hard to be patient, but all Spice Girls fans can do in the meantime is wait and hope for the best. Oh, and listen to "Wannabe" on repeat.