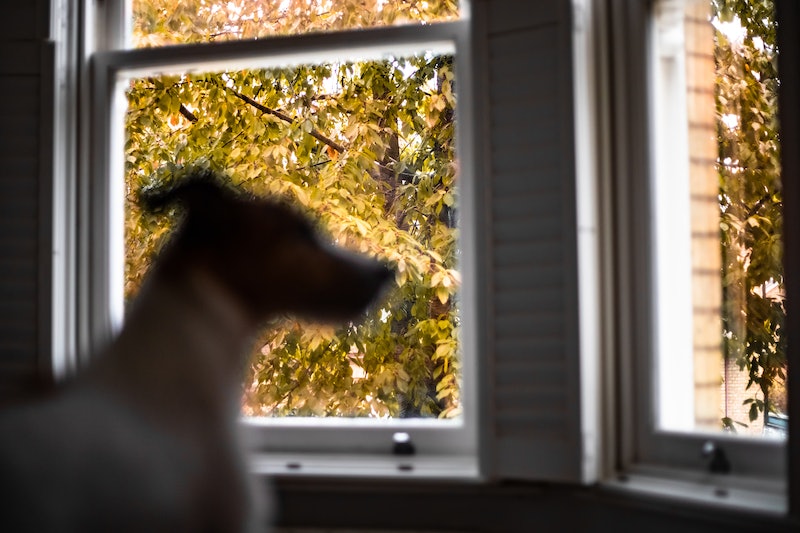 If you ever find yourself asking the question, “Hey, is this wacky creepypasta I keep hearing about true?”, the answer is pretty much always, “Absolutely not.” But for those of you who may have been wondering, what about “Smile Dog?” Is “Smile Dog” real? Well… hopefully you can guess the answer — but there’s still some fun stuff to unpack here, so let’s take a closer look at this perennial classic, shall we?

“Smile Dog’s” precise origins are unknown, but according to Know Your Meme, it’s thought to have first been posted on the /x/ paranormal board on 4chan in 2008. (A lot of classic pastas first saw the light of day on 4chan, so this theory is entirely unsurprising.) A number of images purporting to be Smile Dog surfaced shortly thereafter, although there is one in particular that’s thought to be the very first one — something that looks like a Polaroid with bloody fingerprints on the edges featuring a husky with human-like teeth, grinning.

Like so many creepypastas, “Smile Dog” is written as a first-person account of events that occurred in the narrator’s own life. In this case, our narrator is a young writer, and the events involve their (the narrator’s gender is never revealed) attempt to interview a woman identified only as Mary E. Mary allegedly had experience with a web-based urban legend known as “smile.jpg,” or “Smile Dog” — an image, it's said, that can cause insanity simply by viewing it and that the narrator is investigating for a college newspaper story. Mary, who had been a sysop for a Chicago-based BBS in 1992, is one of about 400 people who saw the image when it first appeared on the Internet; she is also the only one ever to speak about it. It’s unknown who the other 399 people are, but the narrator posits that they have either remained anonymous or are dead.

The interview does not go as planned: When the narrator arrives at her home, they find her barricaded in her bedroom, spouting terrified-sounding nonsense from behind the door. The narrator sits and listens outside the door while Mary’s husband attempts to calm her down. The interview goes unconducted.

The following year, Mary sends the narrator a lengthy email both apologizing for the failed interview and explaining her experience with smile.jpg. Ever since she first stumbled upon the image, she writes, it has haunted her, coming to her in her dreams every single night. It says that it will leave her alone if she does what it asks — that is, if she “spreads the word.” She had received a floppy disc with one file on it (guess what file?) in the mail a week after that fateful day in 1992, you see, and ever since then, she has struggled with whether or not she can or should “spread the word.” For 15 years, she did not — but on the day that the narrator was to conduct the interview, she had originally planned to pass the disk on.

She did not, though; that's why she refused to see the narrator on that day. Now, she implores the narrator to stop their search for information about Smile Dog. She apologizes again. And later that month, the narrator receives word from Mary’s husband that she has died by suicide.

But then, something curious happens: Some time later, the narrator receives yet another email, this time from an unknown address, with a single file attached to it. Will the narrator look at it? And if so, will they then “spread the word” to save themself?

The answer is yes — yes, they will.

Of course it isn’t. Everything on the Internet is a hoax, remember? (Well, almost everything, at least.) But for me, the question then becomes, OK, so if we know it’s not true, why do we always think there’s still the slightest possibility that it could be true anyway? Here’s my theory — you can take it or leave it, but it’s the best I’ve got.

At its core, “Smile Dog” is basically a chain letter, and chain letters have been making the rounds for ages — well over a century, at least. Daniel W. VanArsdale houses an incredibly impressive online collection of chain letters; his oldest one dates back to 1888, so clearly, people on this earth have been at it for a pretty considerable amount of time. While some chain letters are true — some (but not all) of those “prayers for this person who has been horribly injured” ones are, for example — most of them are not… and this is a thing we all know, right? We know it as surely as we know that that nice Nigerian prince fellow definitely doesn’t need our help to secure his fortune or get back home or whatever it is that he tells us he's trying to do.

According to VanArsdale, chain letters typically fall under one of nine different categories: Protection, Charity, Religion, Luck, Advocacy, Money, Parody, Exchange, and World Record. “Smile Dog,” I believe, falls under the heading of Luck — it’s one of those “DO THIS THING OR ELSE DISASTER WILL STRIKE!” letters I remember getting in the mail from my freaked-out friends all the time when I was a kid. While some Luck letters are geared towards ensuring the recipient's good fortune, a huge number of them threaten their readers with misfortune instead, be it general bad luck, bodily or mental harm, or even death. The one way to stop that dastardly letter's mojo in its tracks? Perform an action of some sort. Typically that action is passing along the letter; when you pass on said letter, you also pass on the “curse” it holds to someone else.

So basically, it’s the literary equivalent of that guy at work who’s always shoving his responsibilities off on you and yelling, “NOT IN MY JOB DESCRIPTION, YOU DEAL WITH IT!”

Upon receiving one of these letters, the logical part of our brain always laughs and thinks, “This can’t possibly be true.” The illogical part of our brain, however, can't help but wondering, “What if? Just… well, what if?” Do you really want to tempt fate? No — so, just to be on the safe side, we pass the thing on anyway, thus perpetuating the hoax.

Back in the days when snail mail was your only option, continuing the chain involved a certain amount of to-do: Digging up addresses, replicating the letter, addressing envelopes, purchasing postage, and so on. As the Internet became a part of our daily lives, however, suddenly chain letters could be passed along with the typing of an email address and the click of a mouse — and if you thought about the really big picture, your reach could be wider than you ever could have imagined before. Why? Because you’re not just limited to people whose email addresses you know; the Internet literally connects you to the entire world. Posting something in a public forum — a BBS or a listserve in the early days; a website or a Wiki in more recent years; countless social media sites; you name it — can get that message out to every single person on the planet with an Internet connection.

So: Take that, and then add in something like “Smile Dog.” If your reach is as wide as the entire Internet, then the more people you spread it to, the safer you’ll be, right? So what if everything else will be in even more danger? Not your problem; your work here is done.

Just think how terrifying The Ring would have been if YouTube had been around when it first arrived on the scene.

That’s what’s at work in “Smile Dog.” We’re dealing with an image instead of a video or a letter in this case, but the setup is the same: Post it online; share it with as many people as possible; save your own skin; and damn everyone else in the process. The worst part is the fact that we might stumble upon it unknowingly, with no warning and therefore no way to protect ourselves. In this respect, it essentially becomes a virus — both a computer virus and a human one. We might come in contact with it simply by going about our day-to-day lives… and then we’ll have no choice but to spread the word.

Of course, though, most (if not all) of those classic gloom and doom chain letters aren't real — and neither, for that matter, is the Smile Dog image. Heck, the fact that there are so dang many images claiming to be smile.jpg means that the whole story may as well be jumping up and down, waving its arms, and yelling, “HOAX! I’M A HOAX! HOOOOOOAX!” Why? Because, like Candle Cove , and Slender Man, and so many other creepypastas, it’s one of those stories that struck a nerve with so many people that it became sort of a hivemind horror tale — the hivemind’s way of furthering the mythos was to create the image (or images) that the original story was allegedly about. Sure, the idea of the whole thing is scary… but you know what’s scarier? Seeing an actual image called smile.jpg and wondering whether you were next.

Also, speaking from personal experience, I’ve seen a huge number of images all claiming to be smile.jpg, and I have yet to have an enormous dog-like creature appear in my dreams, urging me to “spread the word." Of course, it occurs to me that at this point, I’ve written about the whole thing enough times that I’m probably safe from it all now anyway...

More like this
26 Ghost Story Podcasts To Get You Ready For Halloween
By Jessica Booth, Mia Mercado, JR Thorpe and Emma Carey
These 25 International Horror Movies On Netflix Prove Fear Is A Universal Language
By Bustle Editors
15 Easy Pranks To Play This Halloween
By Emily Kelley and Lauren Grant
TikTok's Butter Board Might Be The New Cheese Plate
By Emma Carey
Get Even More From Bustle — Sign Up For The Newsletter