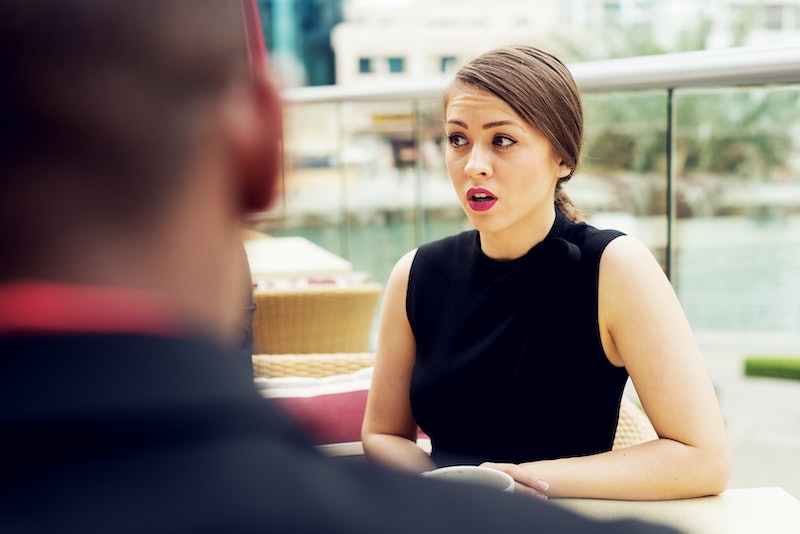 Even though it's illegal to base hiring decisions on gender, that doesn't stop some companies from pulling out the typical questions women get at job interviews, like when they're planning to have kids or how they grew interested in a gender-atypical field. Many of the obstacles women face in the workplace start right with that first interview and might prevent them from getting the job in the first place.

Women are expected to be a lot of different, contradictory things at work. We're expected to be youthful and attractive but not to "tempt" our male coworkers. We're supposed to look professional but not too uptight. We have to speak with authority and go after what we want lest some man be given the assignment we're after, but when we do, we're considered too aggressive. We're supposed to follow our dreams yet are implicitly told certain fields aren't for women.

All these double standards and forms of discrimination are reflected in the questions they get in job interviews. Here are some job interview questions women are sick of receiving and really shouldn't receive for legality's sake, if nothing else.

1. "How are you going to balance your career with your family?"

Bustle's Claire Warner writes that during a medical school interview, someone asked her, "Don't you worry about how your career will affect your family?" People rarely ask men this same question, and it only perpetuates the exclusion of mothers from the workplace by making women feel like they should let family get in the way of their careers and like their workplaces will not do anything to support them while they have kids at home.

I can understand asking someone why they're interested in a particular company or position, but this question is often asked with a hint of sexism, as if to really mean, "How is it possible that you, a woman, ever thought to enter this male-dominated field?"

3. "When was your last menstrual cycle?"

For reals, though. Workplaces do this less often than they used to, but women have had to fill out forms at job interviews asking when their last period was. An Irish university just recently got rid of a job form asking women if they've ever suffered from gynecological problems.

This is, of course, a coded way of asking a woman if she's going to have kids. In addition, it could be a way of determining whether she has a husband to support her and can therefore receive a lower salary.

Women are more prone to ageism in the workplace than men are. For example, one study by the National Bureau of Economic Research found that, when identical applications from women of different age groups were sent out, about 50 percent more women ages 29-31 than ages 64-66 were called back. Asking about age could be a way of determining whether a woman is too old to supposedly fit in.

6. "How do you make sure you communicate diplomatically?"

Eight-four percent of women in the tech industry have been told they're too aggressive. And when they're not being told that, they're advised to speak up and assert themselves more or else a job or assignment will go to someone else (usually a man). So, if you find yourself concerned about a woman's speech habits, ask yourself if you hold the same standards for men.

It's common for women to be criticized for how they dress at work, whether their outfits are considered too revealing, too unprofessional, too masculine, or too feminine. Questions like these remind us we're damned if we do and damned if we don't.

"I want to give you the job. A chance of overtime, say, my place at nine?" Belle and Sebastian sing in the catchy but sexist and all too realistic song "Step into My Office, Baby." Stories of women sexually harassed at job interviews are all too common. Obviously, this demeans a woman's work and sets the stage for an unprofessional environment.

Not specific to women, but I'm throwing it out there, because isn't everyone sick of hearing this? It's a trick question. It forces us to be dishonest by naming a minor weakness that isn't really our greatest one or talking about something that is really a strength and pretending it's a weakness. Nobody wants to be that jerk who says "I'm a perfectionist," but this question doesn't leave us with much of a choice.

More like this
Why You're Seeing Green Bandanas At Abortion Rights Protests
By Lexi Inks
Eleven From ‘Stranger Things’ Is A Cancer Zodiac Sign, An Astrologer Says
By Brittany Beringer
Playing In Wimbledon Whites While On Your Period “Isn’t Easy," Says Alicia Barnett
By Rachel Mantock
How Getting An Abortion Has Changed From The ’60s Through Today
By Amanda Chatel
Get Even More From Bustle — Sign Up For The Newsletter