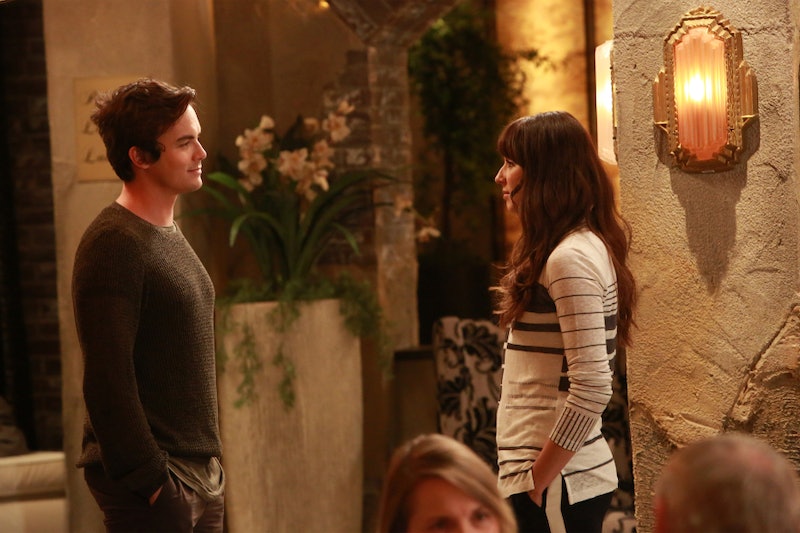 I’m seriously upset. I’ve spent all of this time with Pretty Little Liars as a die-hard Haleb 'shipper, and this is what I get? Season 6B starting with Hanna engaged to a man who is not Caleb and Caleb staying in Spencer’s barn? Season 6A ended with Haleb having plans to move to New York City together, but the ensuing five years pulled them apart. And let’s go back to that Spencer’s barn thing — there were some serious vibes between her and Caleb in the Season 6B premiere. Are Spencer and Caleb dating on Pretty Little Liars , and if so, does Hanna have any idea?

I’m torn about this not only because I thought Haleb was the series' OTP, but also over Hanna and Spencer's friendship. While a very staunch reading of "girl code" would decree that Spencer shouldn't be with anyone Hanna ever dated, I’m a little looser with the language. If Hanna went out on one date with a guy, didn’t like him, and then it ended up that Spencer did, I would say that Hanna shouldn't get mad about that situation. One date is what, three hours? Big deal. But Hanna and Caleb dated for years — at least three but up to eight, since we don’t know how long into the five-year flash they broke up — and that is sacred to me. I certainly wouldn’t want one of my best friends seriously dating my first love. It might be petty, but the heart cannot be reasoned with.

The Season 6B premiere only made me more concerned, because it seems that if Spaleb is a thing, none of the other Liars know about — including Hanna. When hanging out at Radley (which is now a swanky hotel), all of the girls were going around and sharing their respective romantic lives, and Spencer quickly said that she was “too busy” for dating. All of Spencer’s friends seemed to believe her, but that may change.

See, Caleb isn't keeping as quiet. When he visited Hanna in her hotel room in the 6B premiere, he mentioned that Spencer called to tell him about Charlotte's death and that he was staying in Spencer’s barn. Though Hanna was a bit surprised, I don’t think she sees what actually could be happening here. Caleb could be hacking and protecting firewalls from anywhere, especially Washington, D.C. Maybe he and Spencer have been carrying on a romance behind everyone’s backs for much longer than we thought. For more on a potential Spaleb romance, check out Bustle's PLL podcast, Taking This One To The Grave.

Even though Hanna is engaged to someone else, I can’t imagine she’d take the news well if it's revealed to be true — I know I wouldn’t. I just hope that if Spaleb does happen, it doesn't hurt Spanna for good.

Forgot what happened in Season 6A? Check out our (drunk) recap video below.