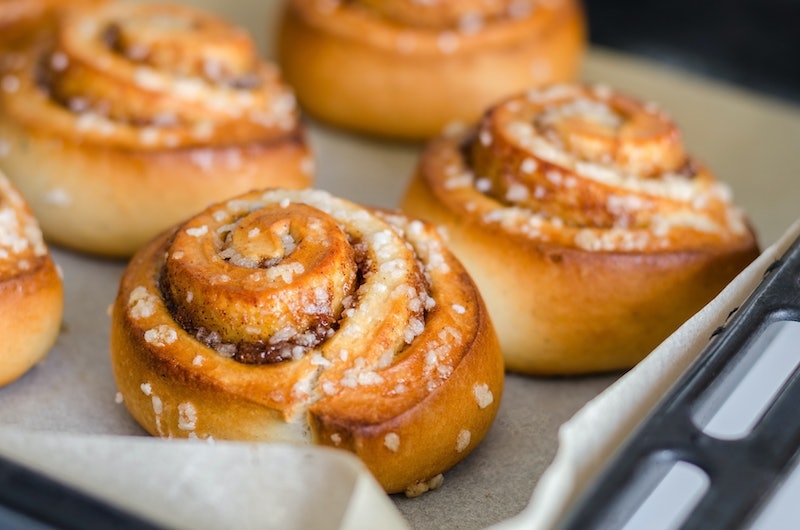 One of my favorite parts about being an adult is being able to eat whatever I want for breakfast, and thanks to the introduction of new Cinnamon Bun Oreos, I have a feeling I will soon be adding this creative new twist on Nabisco's classic sandwich cookie to my morning meal lineup. Yes, my fellow snack food fiends, Cinnamon Bun Oreos are now a thing that exists. Just let that sink in for a minute. Cinnamon Bun Oreos.

The latest addition to the Oreo lineup made its debut Jan. 18, and is the first new Oreo flavor of the year. Not surprisingly, it's so far received only rave reviews. Two yummy cinnamon cookies sandwich cinnamon bun-flavored filling, which tastes just like the warm, gooey, icing you'd find topping your favorite brunch pastry IRL. (Side note: why don't we top more things with cinnamon bun icing?) Needless to say, it took about 20 seconds for a package of Cinnamon Bun Oreos to disappear at Bustle headquarters, because, well, they're just that good. Bustle senior multi-media editor Rosanne Salvatore summed it up perfectly: "These are freaking delicious."

The Cinnamon Bun Oreos hail from the Oreo Wonder Vault, which has also produced past favorites like the Birthday Cake Oreo, and the S'mores Oreo. The world first caught word of these wonder cookies back in September, when the Impulsive Buy posted a sneak peek, and we've been left to speculate about their arrival ever since:

An Oreo rep says the new flavor is here as "an everyday addition to the Oreo lineup," so it looks like these babies are sticking around for a while. Nabisco is also bringing back its former crowd favorite Red Velvet Oreos, which were a hit around Valentine's Day last year, and are being added as on ongoing offering. Both flavors are on shelves now and sell for $4.49.

Of course, now that Cinnamon Bun Oreos are finally out, I can only guess what new flavor Oreo has in store for us next. But if I may be so bold, I'd like to suggest a Nutella-chocolate mashup. Imagine that for a minute, and tell me I'm wrong. Oreo has hinted that a third undisclosed flavor will be released from the Wonder Vault soon, but we're going to just have to wait and see what it is. In the meantime, happy snacking.

More like this
On TikTok, Tinned Fish Date Night Is The Latest Viral Food Obsession
By Emma Carey
UK Audiences Will Soon Be Able To Watch 'The Bear'
By Frances Stewart
Twitter Is Overjoyed With 'The Great British Bake Off's Return
By Maxine Harrison
The 8 Best Fridge Organizer Bins To Tidy Everything From Produce To Drinks
By Rachel Dunkel
Get Even More From Bustle — Sign Up For The Newsletter