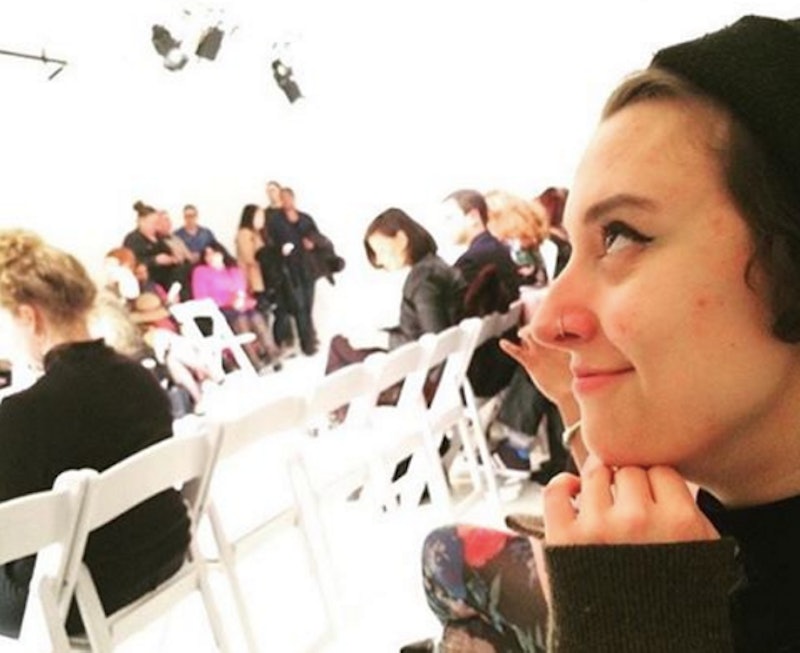 For as long as I can remember, I've always hated the color pink. My younger self strongly rejected it in their clothing, later excluding it from their makeup collection (sans a few moments of experimentation). Try as I might, I just couldn't bring myself to relate to the hue at all, the only exception being my texting habits because my favorite emojis happened to be the pink nails, the pink bow, and the pink-shirted lady.

My dismissal of the color carried well into my teen and young adult years. But as a more fully-formed human, I'm aware that my discomfort with the color doesn't necessarily ring true with everyone around me. If you love pink, I completely respect your choice to rock it. And honestly, I love the way it looks on other people. I just can't seem to place myself with the color, no matter how many ways the shade's gendered implications are dismantled around me.

Early on, my parents grew to realize that attempting to outfit me in pink would result in a pretty full-blown meltdown. So I spent my childhood as the polar opposite of my hyper-feminine sister, who adored the hue more than anyone else I knew at the time.

The pile of pastel frills and pink-colored costume jewelry that she would surround herself with were admittedly pretty cute. But I couldn't touch them, just in case I "caught" some of their femininity. I never even used this dreaded hue when coloring in elementary school. I never wanted pink Barbie paraphernalia. But my world was rocked when a boy I was friends with expressed his preference for the color, proceeding to use it in his drawings. I was astonished to see a masculine person embrace the hue, and started wondering why pink really bothered me so much.

Like most people, I was raised to adhere within the gender binary, even though I was genderqueer. My resentful feelings for femininity were likely built from childlike ignorance and humans trying to suppress my masculinity. At the time, I never could have conceptualized that those feelings were misogynistic. Rather, I was growing to hate femininity because of my own gender confusion and based on stereotypical portrayals of women in the media.

Of course, I support anyone's decision to rock the hell out of pink. Odds are they'll make it look fabulous. Pink was incorporated into Drake's "Hotline Bling" and Pantone's 2016 Colors Of The Year, after all. My beloved Planned Parenthood reps the color pretty hard, and holds an annual Pink Out Day every fall. Even Kanye is a lover of the hue, telling Fader back in 2012, "Why would anyone pick blue over pink? Pink is obviously a better color."

Pink hasn't always been equated with femininity, either. According to Smithsonian Magazine, people didn't start dressing their children in gendered clothes until the early 1900s. As the publication reported, the beginnings of gendered clothes didn't even assign girls pink. A 1918 article from Earnshaw's Infants' Department reading, “The generally accepted rule is pink for the boys, and blue for the girls. The reason is that pink, being a more decided and stronger color, is more suitable for the boy, while blue, which is more delicate and dainty, is prettier for the girl.”

This would ring true until the 1940s, when colors in baby clothes were switched to indicate masculinity with blue and femininity with pink, Smithsonian reported. Clearly, the standards of gender are just as ever-changing as beauty standards, and therefore ultimately irrelevant. But as a sensitive person with a fluid gender identity, I can't help but feel affected by gender constructs anyway.

Even with so many endorsements coming from dope people and establishments that I love and respect, as well as the knowledge of industries constantly changing their mind about gender, I still can't manage to hear them out enough to wear the color comfortably. For me, wearing pink still feels like I'm covering myself in femininity and stepping on the toes of my masculinity and genderqueer identity in the process.

Despite the color's inclusion in the transgender flag, many trans and non-binary folks I know also feel that the color is exclusionary and threatening. Maybe it's because of Barbie, who is almost always pretty in pink, and who many feel represents harmful gender and beauty expectations. Maybe it's because pink was once marker of violence, as queer people in Nazi Europe were consigned to wear pink triangles to identify themselves. Ultimately, though, I'm willing to bet part of the cause is our own internalized misogyny. And that's scary business. Some might reject pink for its gendered implications, but doing so ultimately attacks femininity as a whole.

At the same time, I know many queers who embrace pink, proudly rocking it in their wardrobes and makeup on the daily. My friend Jacob sports a gorgeously flawless pink lip that has even made me consider revisiting the hue for myself, digging out the pink colors in my makeup bag that I'd previously designated to beauty limbo.

I want more than anything to interrogate my own internalized misogyny (and eventually, eradicate it completely). I want to pick apart my perceptions of femininity, and how much my own insecurities regarding gender affect my politics and ability to use certain styles and colors. I'm embarrassed to say that I feel intimidated by the femininity of others at times. But I'm very ready to explore that further and reshape what pink means to me. At the end of the day, it's crucial to remember that pink doesn't have to be feminine. But even if it is, femininity doesn't have to be shameful.