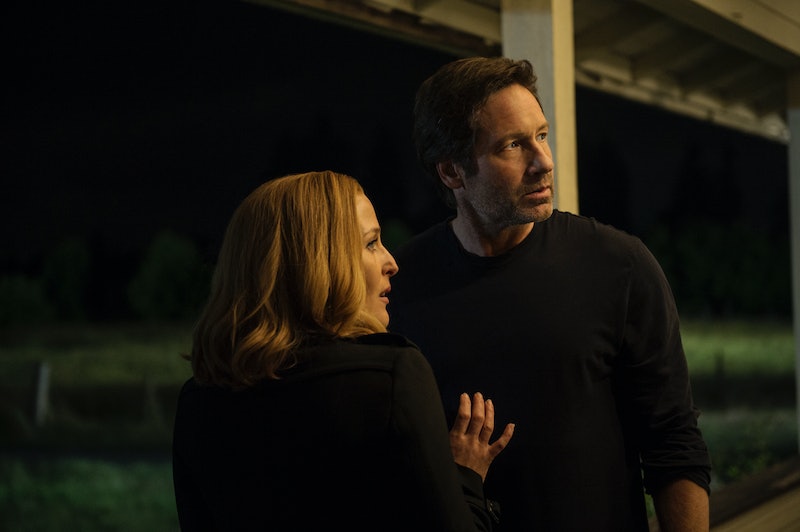 When your show is on the air for nine years, viewers come to expect certain things: familiar faces, reliable relationships, tried-and-true plot beats, etc. Of course, you always want to surprise your audience, but at the end of the day there has to be something comfortingly recognizable to keep your viewers tuning in week after week. That's especially true when your show has been off the air for 14 years. When FOX's The X-Files returns to the small screen this Sunday for its six-episode revival, it will have to feel familiar enough to its old audiences to make them fall in love all over again; but it will also have to feel fresh enough to draw in new audiences who maybe weren't around during the show's heyday in the late '90s. So how will this new X-Files be different, and how will it be the same?

Let's start with the cast. Obviously, original series stars David Duchovny and Gillian Anderson will be reprising their roles as Agents Mulder and Scully. But they're not the only ones who are coming back: other returning cast members include Mitch Pileggi (Skinner), William B. Davis (Cigarette Smoking Man), Annabeth Gish (Agent Reyes), Sheila Larkin (Margaret Scully), and Tom Braidwood, Dean Haglund, and Bruce Harwood (the Lone Gunmen). While some old standbys won't be making reappearances — most notably Robert Patrick as Agent Doggett — there will be plenty of new blood to take their place.

The biggest new character viewers will have to get acclimated to is Tad O'Malley, a conservative talk show host and unlikely ally of Mulder's played by Community's Joel McHale. Other big-name guest stars include The Americans ' Annet Mahendru, Silicon Valley 's Kumail Ninjiani, The Flash's Robbie Amell, and Six Feet Under's Lauren Ambrose. The latter two will be playing a pair of young F.B.I. agents, one brown-haired man and one red-haired woman, named Miller and Einstein, causing many viewers to wonder if a spinoff could be in the works. In answer, creator and showrunner Chris Carter told TVLine, "People can speculate, but [their pacts] weren’t negotiated that way. Right now I’m focused on doing the show with David [Duchovny] and Gillian [Anderson]."

Then there's the talent behind-the-scenes. Carter is once again in charge of the show — there's likely no way an X-Files revival would even have been considered without his involvement. While Carter has worked steadily since The X-Files went off the air in 2002 — including on one spinoff (The Lone Gunmen), two X-Files feature films, one short-lived series (Millennium), and one failed Amazon pilot ( The After ) — this is by far his most highly-anticipated project since Mulder and Scully checked into that hotel room in Roswell shortly after evading assassination.

Carter personally penned and directed three of the revival's six episodes: both the premiere and the finale (titled "My Struggle" and "My Struggle II") as well as the penultimate episode, "Babylon." The other three episodes are all scripted and directed by old X-Files mainstays: James Wong (who is now a writer on American Horror Story), Darin Morgan (Fringe, Intruders), and Glen Morgan (Those Who Kill, Intruders). While it's great to see all of these familiar names back in the same room, the list of returning writers and directors is actually more notable for who's absent. The X-Files turned out to be a great springboard for lots of promising TV talent: among those too busy to return are writers Vince Gilligan (Breaking Bad, Better Call Saul), Howard Gordon (24, Homeland), and Frank Spotnitz (The Man In The High Castle), and director Michelle MacLaren (Breaking Bad, The Walking Dead, Game Of Thrones, The Leftovers).

And then there's the structure of the season itself. The X-Files was famous for combining an overarching serial narrative (the aliens) with one-off monster-of-the-week episodes — a balance that's exceedingly difficult to maintain. Other shows that have attempted to juggle both formats (like FOX's own Fringe) have ultimately had to decide one way or another whether they were going to be serialized or episodic. But The X-Files remained a hybrid to its very end, and will continue to do so in this six-episode revival... with one big difference.

During the original nine-season run of the show, the episodes that focused on the alien mythology arc were sprinkled erratically throughout the series, popping up unpredictably, with anywhere from five to 10 of those serialized hours scattered amongst each 20-odd-episode season. However, there's no such guesswork involved this time. The only two episodes that will deal with the aliens are the premiere and the finale, which will bookend the four eclectic monster-of-the-week episodes that make up the meat of the season.

X-Files fans are bitterly divided about which version of the show is better. Some are in it for the serialized storytelling, and view the monster-of-the-week episodes as distractions. Others find the conspiracy of the alien plot too convoluted, and prefer it when the show lets its freak flag fly with its one-off monsters. With the unique structure of the revival, both fanbases will get what they want and nobody will be unpleasantly surprised.

(Of course, there's a third fanbase: the ones who were in it for the on-again-off-again romance between Mulder and Scully. Those people will be crushed to learn that the pair is in an "off-again" phase of their relationship when the miniseries starts up this weekend.)

Finally, there's the tone of the show itself. The X-Files has always been about conspiracy theories, even when those conspiracies got too intricate for their own good. But the original run of the show went off the air in May of 2002 — just eight months after the events of Sept. 11, 2001, reignited a firestorm of paranoia and surveillance and conspiracy theories unprecedented in this country since the Cold War. The revival will be the first season of the show to exist fully in a post-9/11 world — a fact that Chris Carter couldn't ignore in planning the new episodes.

"A lot has happened since then," the showrunner claimed to Entertainment Weekly last summer. "A lot of rollback of rights and liberties in the name of our protection. We’re being spied on now, we’re being lied to — all things that, for me, remind me of when I grew up, which was right around Watergate. I think we’re in similar and much more dire times right now."