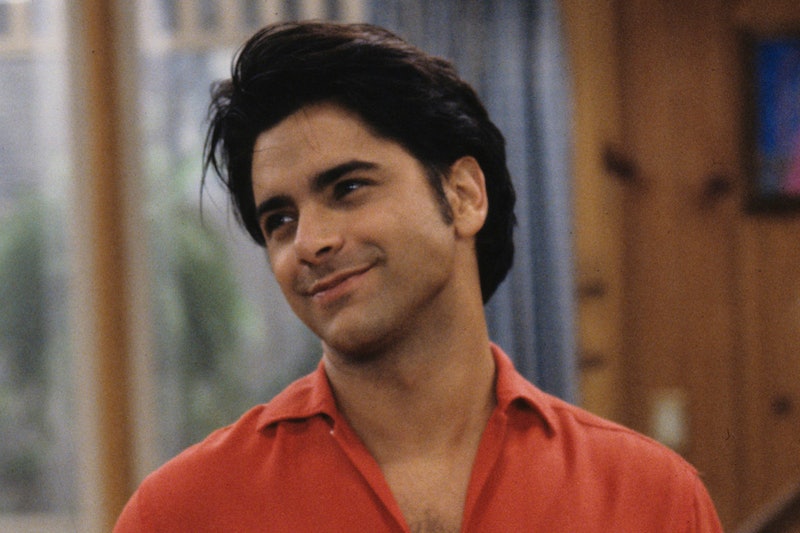 There are four things everyone knows about Full House 's Uncle Jesse: Elvis is his idol, Michelle is definitely his favorite, Aunt Becky is his soulmate, and he is obsessed with his hair. It is hard to fault him on that, as Uncle Jesse's hair is a national treasure. His dark locks are truly a thing of beauty, especially when a few wisps fall across his forehead. I can totally understand why he was always so protective of his hair, as it was a key part of his style. What would Uncle Jesse be without his head full of wavy, oh so luscious locks?

Well, he's played by John Stamos, so he would still be gorgeous, but it is hard to imagine him without his trademark look. The first time Jesse got it cut onscreen, he crashed his motorcycle, so it is a pretty essential part of his character. That does not mean all of Uncle Jesse's hairstyles were created equal though. In the beginning the man had a mullet, OK? That is not a thing I can reward.

In the interest of science and also because once Fuller House debuts on Netflix you will once again be ogling Uncle Jesse, I have ranked all eight seasons of Uncle Jesse's hairstyles. Starting at the bottom with the look Stephanie would have rewarded an "oh, brother" and an eye roll and finishing up with a certified "have mercy" style of sexiness, this is the Uncle Jesse hairstyle ranking you never knew you needed in your life.

Just no, a world of no. Jesse was young and it was the '80s, so I won't hold his mullet against him, but this is hands down the worst thing that ever happened to his head. Even Stamos cannot make a mullet work, which should serve as a lesson to anyone considering doing this to their hair.

Uncle Jesse is crying because his hair looks like a helmet. It just looks so sticky, I don't even want to think about it. The cut is good, and the style is OK, but there legit has to be a whole bottle of hair gel holding every single strand in place.

By the end of the series, Uncle Jesse's hair had taken on a life of its own. His longer locks are begging for you to run your fingers through them, but there might just be too much of a good thing. A quick trip to the hairdresser to lose an inch would have made Elvis proud.

Maybe the shock of having twins was all the adventure Uncle Jesse could take for one year because in Season 5 his hair is just kind of there, hanging out. It looks good, but it's also the safest look Uncle Jesse ever attempted, so I must deduct points for a lack of creativity.

Bless Stephanie Tanner and her scissors. The best thing that ever happened to Uncle Jesse was Stephanie lopping off the back of his mullet forcing him to get this smoking hot cut. Excuse me while I stare and drool.

This is not a hairstyle mere mortals could construct on their own. This is a work of art worthy of the Louvre. Perfectly tousled and impeccably styled, it's hard to believe Uncle Jesse's hair could possibly be more on point than it is here. Except when he had...

Uncle Jesse is going to have to bring his a-game to top Season 6's hair perfection in Fuller House, but if anyone can do it, he can.

More like this
Here’s Why Danny Masterson’s Hyde Isn’t In 'That '90s Show'
By Brad Witter
'Friends' Star Maggie Wheeler Offers Support To Matthew Perry After Reading His Memoir
By Alyssa Lapid
Twitter Is Having A Field Day Over Mr Blobby’s Costume Selling For £62k
By Catharina Cheung
Mel B Thinks These Celebs Should Play Them In A Spice Girls Movie
By Alyssa Lapid
Get Even More From Bustle — Sign Up For The Newsletter
From hair trends to relationship advice, our daily newsletter has everything you need to sound like a person who’s on TikTok, even if you aren’t.