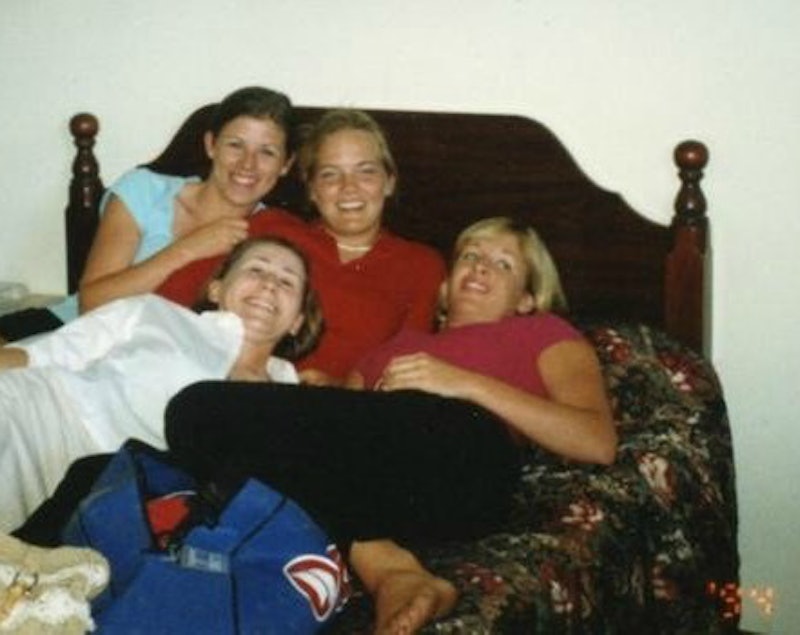 There were many things that contributed to the '90s being so epic, but the sleepovers we enjoyed during that decade have to be near the top of my list. Sure, me circa now shudders a little at the slumber party antics of me circa then, but the delayed-onset mortification is entirely worth it. Because, real talk, the things you did at sleepovers in the '90s could not have been more fun and in the moment.

I'm 32 years old now, which means I got to experience a wide spectrum of '90s slumber party styles. In the early '90s, my elementary school BFFs and I piled into some mom's Dodge Caravan and carpooled to a house with at least three other moms, whom I now suspect were chilling downstairs with a bottle of Pinot Grigot while our posse of pint-sized girls gabbed until we passed out. In the mid-'90s, as we entered adolescence, the sleepovers were far more dramatic and often occurred in conjunction with middle school dances. And, finally, in the late '90s, sleepovers became an opportunity for my high school friends and I to squeeze every last drop out of our time together. Or, you know, to overcaffeinate and stay up all night to complete a project due the following morning.

So it goes without saying — although I will anyway — that I'll gladly take a stroll down memory lane if the final destination is '90s sleepovers. Join me as I wax nostalgic about some of my favorite activities from those days (or should I say nights?)

Or Clueless. Or any of the other '90s movies now rightly considered cult classics, because we still can't get enough of them. Of course, we talked through said movie the entire time and wound up watching it over and over again — and/or rewatched certain scenes with wild abandon. I think my friends and I replayed the pool scene from Romeo + Juliet so many times we melted the VHS film spool.

2. Chanting "Light As A Feather, Stiff As A Board"

This was especially popular at the height of the '90s grunge era, when The Craft was the movie du jour and Urban Decay eyeliner was all the rage. I distinctly remember playing this upstairs with my friends Andrea and Nikki while Nikki's parents hosted a cocktail party downstairs, and we felt so dangerous and cool ... even if the only thing that ever came from a round of this occult game was sprained fingers.

Because communing with spirits in the afterlife during "Light as a feather, stiff as a board" wasn't spooky enough, '90s sleepover-goers felt compelled to turn off all the lights and read passages from the Goosebumps books by flashlight. The ensuing shrieks proved so shrill they usually managed to summon the father of the house from his slumber to deliver a good stern "hush."

4. Singing And Dancing Our Little Hearts Out

Sleepovers merited a brand new mix tape or CD — partially because it was a special occasion and largely because the ones stashed in your car or backpack were too scratched to make a full rotation anymore. But when that music did blare, the world was our stage. We danced on the bed, around the coffee table, and up and down the stairs, all the while using our hands and hairbrushes as make-believe microphones. Or, if you were my BFF Shelley, standing on a chair belting out the lyrics to Alison Krauss' "When You Say Nothing At All" while vowing never to take off the acid wash jean vest your crush had touched during your slow dance.

Eesh. I now shudder to think how much time '90s me devoted to playing this electronic board game during which you try to guess which one of 24 "incredible guys" really likes you. Yet, we did — and acted every bit the googly-eyed, giggling creepers while we dialed the numbers of imaginary Lotharios to learn clues about everything from their clothes to their favorite foods.

6. Giving Each Other Makeovers

Whether you were goth, preppy, or somewhere in between, your sleepovers in the '90s likely involved bonding via the sisterhood of the traveling Caboodles. (Please do note my shiny forehead and puka shell choker in the throwback pic at the top of the page — I happily took all the help I could get.) Come to think of it, why don't we still do this? I'd totally shill out for a sitter just for the opportunity to lounge around reading girly mags while someone painted my nails and applied a mud mask to my facial pores. Who's with me?

Ah, yes. Let's do revisit the days when my gastrointestinal system could have and probably should have been studied for its mystifying ability to digest copious amounts of unhealthy '90s snack food. Dunkaroos? Yes, please! Bagel Bites? You betcha. Fun Dip? Sure thing. Pepperoni pizza? Naturally. Eating wasn't just a passive activity at sleepovers in the '90s; it was a call to arms.