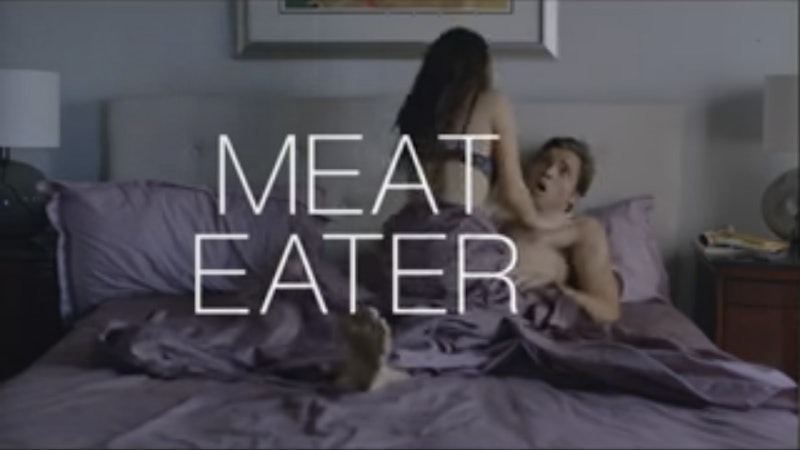 You're probably familiar with Peta ad campaigns being controversial, and while this isn't as incendiary as some of some of their more political ads in the past, an ad they intended to be their Super Bowl commercial was definitely a bit WTF. The whole idea of this ad is that vegans are better than non-vegans in bed. And so they show a whole lot of sex. Like a lot of it. For the vegan man, anyway. The non-vegan has some performance difficulties. And then things get weird.

Look, I've been a vegan for over five years and think that being a vegan is great. And it is good for your health, which obviously shapes things like your sex life. But even this is a little much. I mean... it's a lot much. I'm sort of on board with showing how it could be good for your sex life, and according to The Huffington Post their point was to show that "cholesterol in meat, eggs, and dairy products slows the flow of blood to all the body's organs—not just the heart." And then it all goes a bit mental. Maybe you should just watch for yourself.

Oh, and why won't you see it on the Super Bowl? Well, a spokeswoman told The Huffington Post: "We did try to submit the ad last fall but we didn't get a response from the executives at CBS." Huh? You'll just have to check it out here. It's kinda NSFW.

Meat eater. Vegan. Lots of sex. This continues for some time.

Oh no, look at the meat eater! Something unsatisfactory happened! He finished too soon. Or maybe just lost it. Lady cannot even touch his disgusting underperforming body. But Mr. Vegan is still pumping away giving the other lady showers of vegan pleasure (definitely a real phrase).

Mr. Meat's woman is leaving the bed. But look at Mr. Vegan's lady.

Mr. Meat's lady is so upset she is on her phone. Presumably texting her friend about how this man's bacon interfered with his sausage. But Mr. Vegan's woman is now TWISTED LIKE A GODDAMNED PRETZEL OF BLISS.

In his meat-eating shame, he leaves. Cue: "I walk a lonely road, the only one that I have ever known, because of my processed meat consumption and the way that it affects my penis." (This is the song in my brain, not the real song playing.)

"Here I go again on my own, because I like my cappuccinos with dairy milk foam." Go in your erectile dysfunction awkwardness.

And then the effing air conditioner smashes his skull. WHAT!? WTF PETA? Is this supposed to be that a sexually disgruntled woman seeks revenge? Or implying that if you eat meat an air conditioner will break your neck? I DON'T UNDERSTAND WHAT THE HELL IS HAPPENING.

But of course the vegan goes on valiantly. No sexual embarrassment-related air conditioner deaths. Just the sex. Because... you know, science and things. WHAT IS HAPPENING?

Images: PETA (People for the Ethical Treatment of Animals) /YouTube