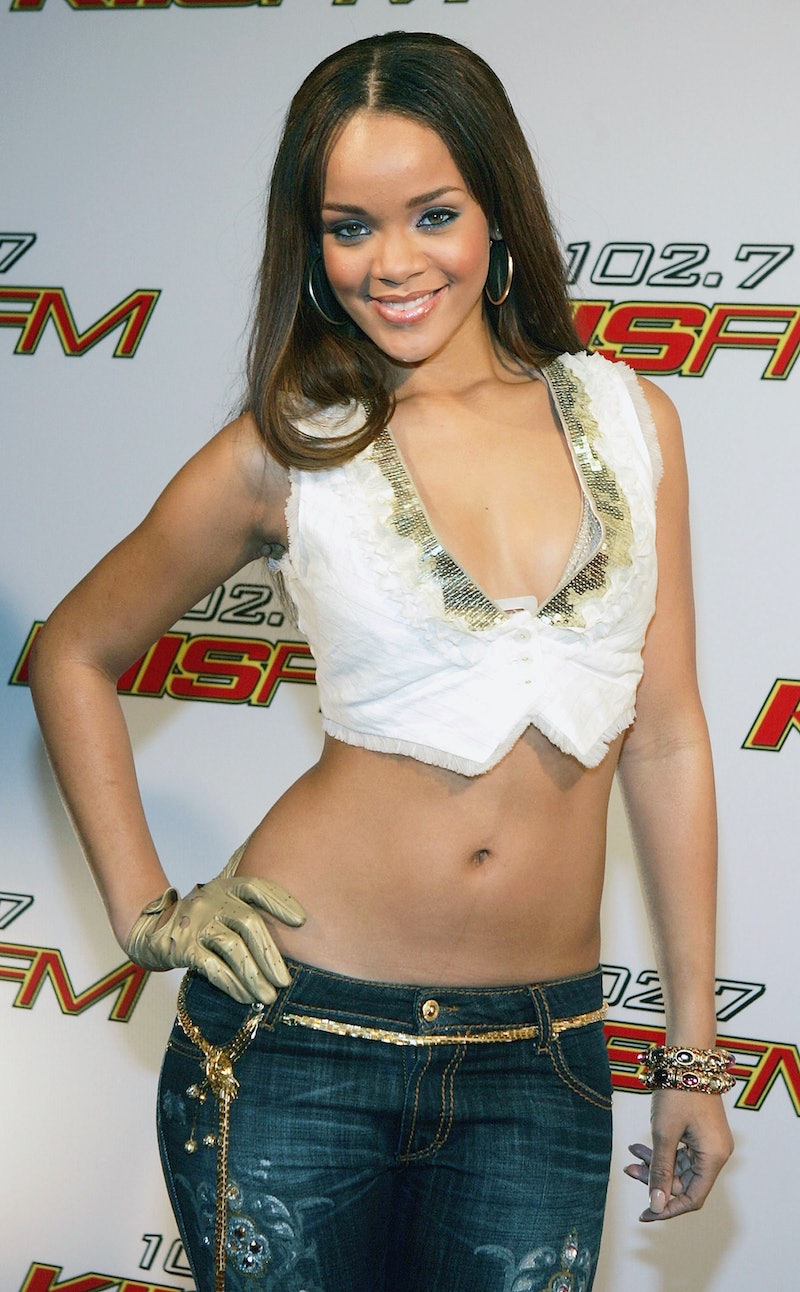 It's been over 10 years since she first popped up on our radar and she's still thrilling us with her music and fashion. Rihanna just dropped her new album ANTI after many stops and starts. It inspired me to listen to her early classics like "Umbrella" and "Take a Bow" and to dig up '00s-era Rihanna outfits I totally forgot about. In this decade, Rihanna sets and defines trends every time she gets dressed, is snapped by the paparazzi doing normal things like going out for dinner, or posts an Instagram. She's been sharing snaps on IG a lot less frequently, BTW. That said, a decade ago, she was still cultivating her personal style and it involved a lot of crop tops.

In fact, her abdomen-baring shirts were plentiful enough to rival Britney Spears' closet.

Rih's look at the time was quite similar to established pop stars like the aforementioned Spears and Christina Aguilera. She would eventually experiment and evolve towards iconic, fashion forward looks.

But back then in the '00s? She was a safe, similar to the peers she aspired to be like, and maybe even a little boring. Yes, some of her outfits would hint to the edgy fashion diva she would become. But for the most part, she was in full development mode for much of the '00s before hitting her stride in '08 and '09.

This gold lame bikini top doubled as her shirt for this outfit. Back in '05, she loved baring her tummy. She was all about that bling.

Rihanna has always loved her a mini dress and still does. But back in 2005, she rocked this girlish black and white number.

A vest and cuffed capris? That was so insanely mid-'00s.

Would Rihanna ever wear boring brown in 2016? Probably not.

Her street style game is one of the strongest there is. She hinted at it back in the mid-'00s. She really did love showing off her abdomen. A lot.

She was all about this pairing and matching shoes!

This fur-trimmed coat was an early indication of her eye for high style.

This frock, which looked a lot like Marilyn Monroe's infamous subway dress, was a harbinger of the sexpot look Rihanna would eventually patent. I totally forgot about this but I still love it.

Her belted performance romper was really cute and nautical.

This checked jumper with suspenders was certainly... different. She probably burned this or gave it away because it was so unlike her.

Rih rocked a tiered mermaid gown. This would be way too safe for the Rih of today. But it was classic and pretty.

This 2007 ensemble was more like the Rihanna we know now. She mixed a print with bright yellow slacks. It was unusual.

This yellow dress, worn in 2008, was quite the Southern Belle look, wasn't it?

Check out those squared off, statement shoulders! This was 2009, but it could have been 1989. Still, by this point, Rihanna the trend influencer was starting to rise to the surface. Those shoes, though.

This sliced and diced white pantsuit also had statement shoulder... pads. Actually, those looked like football pads. It was certainly unique.

Yep, by 2009, Rihanna was going for it with her fashions. This laser-cut, black and white dress was as far away from the crop top and jeans she favored earlier in the decade.

That concludes our tour of some of Rihanna's ensembles from the '00s that you totally forgot about. It was time to dust 'em off and reminisce.

More like this
14 Spicy Bralette Outfits For Vaxed Girl Summer, Round 2
By Avery Matera
All The Early 2000s Hairstyles Rihanna Wore In A$AP Rocky's "D.M.B." Video
By Olivia Rose Ferreiro
10 Nail Trends That Perfectly Capture The Early 2000s
By Paris Giles
Machine Gun Kelly Wore A $30K Diamond Mani To The BBMAs
By Paris Giles
Get Even More From Bustle — Sign Up For The Newsletter