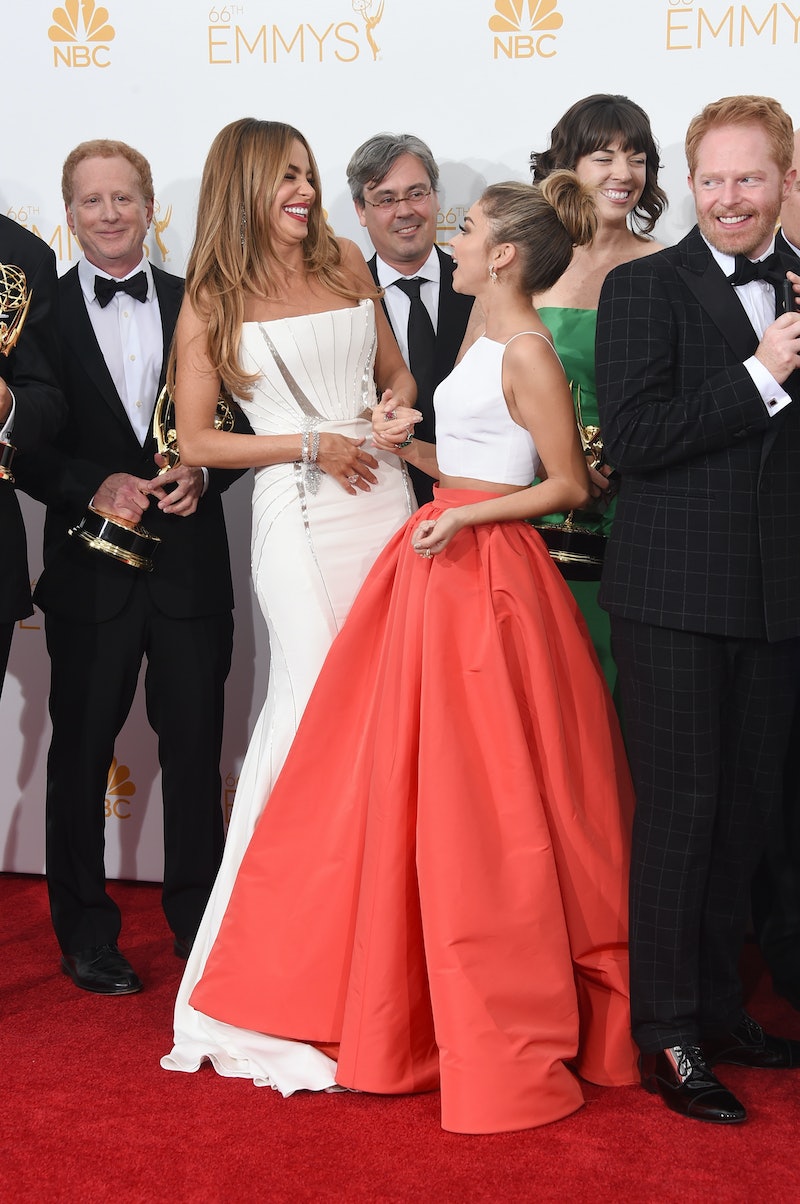 Since this cast has been appearing at the Screen Actors Guild Awards for seven years now, they're basically tenured professionals at walking that red carpet. But a lot has changed since the first time the cast of Modern Family attended the SAG Awards. There's no doubt the actors who portray the fascinating, humorous, and loving characters on the show will look fabulous this Saturday at the annual event. But there's also no denying that they've certainly come a long way since their first appearance at the show so many years ago.

In 2009, after their first season of airing on network television, the Modern Family cast was nominated for Outstanding Performance By An Ensemble In A Comedy Series. While they didn't receive it that first year (they lost to Glee — sigh), they did bring home the honor in 2010, 2011, 2012, and 2013, along with racking up other nominations and awards for the show. While their awards count certainly increased since the first time they went to the SAGs as a group, so has their sense of style (and some of the actors themselves — kids grow up fast).

Let's take a look back at the first time the cast of Modern Family attended the SAG awards. It's equal parts funny and fascinating to see how far this cast has come in just a few years. You might even get a little sentimental.

How could I not start with the cutest cast member of them all? Rodriguez was a dashing gentleman at his first SAG awards in 2011. Clearly, he was already a pro at red carpet photos, amirite?

Screen mom Sofia Vergara looked gorgeous in a pink and purple ombre gown the year before. She's as stunning as ever, and it's clear that her love of curve-hugging, sexy gowns has been around for awhile!

The rebellious Haley Duphy probably would have opted for a lacy, black number for a formal event, but Sarah Hyland's choice was gorgeous, too. The lilac color looked stunning against Hyland's flawless skin. While her style is a lot edgier now, this gown definitely made the best-dressed list.

You can never go wrong with a light blue suit, and that's exactly what Jesse Tyler Ferguson chose at the SAGs when he first attended. The suit and white shirt made a perfect combination, but I'm thinking he may go with a classic black suit this year. I guess we'll have to wait and see!

In 2012 it was made clear that the very adorable Lily Tucker-Pritchett was just as cute in real life. Aubrey Anderson-Emmons wore a gorgeous blue and black dress to her first SAG Awards in 2012. Even though she probably had no idea what was going on, she looked cute as a button!

Cameron Tucker is by far my favorite character from the show. The retired clown never fails to make me laugh, and his flawless ensemble for the 2011 SAG awards was a perfect choice for accepting the cast's well-deserved win.

Julie Bowen's regal outfit for the ceremony in 2010 was unique and so very pretty. Although her character probably would never have been caught dead in a dress like this, she wore is effortlessly.

Ariel Winter, who plays Alex Dunphy on the show, was so cute back then in this princess-y gown! Winter has certainly grown up a lot since then, but she's still just as lovely.

Finally, we have Nolan Gould. The actor who plays Luke Dunphy has probably changed the most since first SAG awards. Gould has grown up a lot while filming the series. Appreciate this photo, because the snap perfectly describes how much the show's cast has changed since it first aired.

Go ahead, grab those tissues and shed that tear. I wasn't lying when I said you'd get sentimental. Here's to a great show, and many more SAG awards in the future for the Modern Family cast!