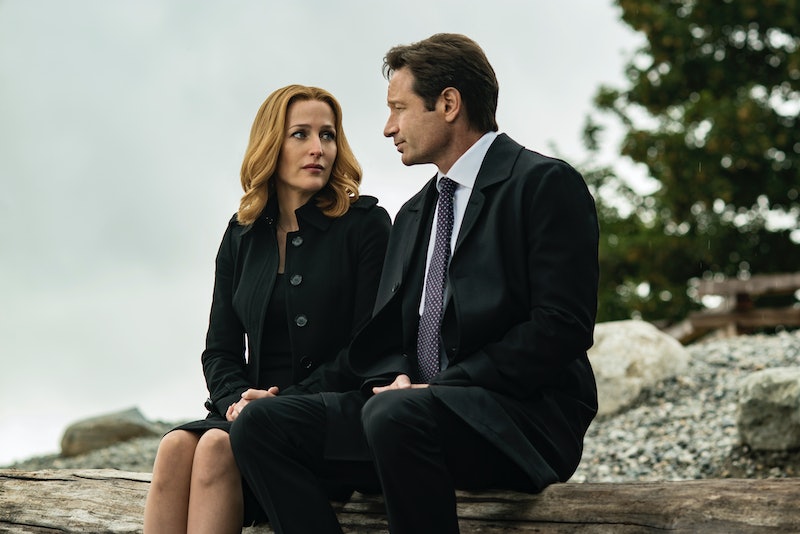 I legitimately burst into tears when The X-Files revival was announced — mostly because the original show is in my bones and I feel incredibly lucky to have it back. But now I realize that I was also weeping a little for Special Agents Mulder and Scully, who went through hell and would surely be subjected to more physical and emotional torture in Season 10. And guess what? I was right. Take Mulder and Scully's lost son William, for example. The revival episode "Founder's Mutation" featured some mournful conversation about their child and, for good measure, a few agonizing dream sequences about the life they could have had with him. The agents are coping with a tragedy that played out first in the original series. And if you didn't have time to marathon all 202 original episodes before the show returned or are a newbie who decided to jump into the new episodes fresh, you might need a quick recap of what happened to William on The X-Files and why Mulder and Scully had to give him up.

William's very existence is referred to by several characters in the show as "a miracle." When Scully was abducted by the government (in the guise of aliens) back in Season 2, she was violated in more ways than one. Shortly after she was returned, Scully found out that the procedures she endured had made her infertile. Mulder eventually tracked down her stolen ova, though a doctor classified them as unviable. Scully later consulted her own doctor — who she didn't realize was on the conspiracy payroll — and he told her she had a shot of conceiving. After William's birth, Mulder is acknowledged as the father of the child by Scully and others, though the show still hasn't explicitly explained how it occurred. I mean, I do know where babies come from, but William isn't any ordinary baby. Mulder agreed to be Scully's sperm donor in an insemination procedure that she was told didn't take. Maybe that was a lie by her sketchy doctor, or maybe they just conceived the old-fashioned way. The Season 7 episode "All Things" features an ambiguous "morning after" scene that's very special to Mulder and Scully 'shippers, for obvious reasons. Look at these glowing goofballs and tell me that they didn't have a great time making this kid.

Sadly, there were never going to be any white picket fences in Mulder and Scully's future. William, both in utero and after his birth, is targeted by several parties interested in what made him and what he can do. The X-Files hardly ever answers a question without asking two or three more, so we still don't know which William scenario is real.

Is he a super soldier, bred to be a perfect killing machine? Is he a savior whose destiny is to stop alien colonization of Earth? Or is he just an experiment in organic hybridization — a normal human child but for a few strands of alien DNA? Scully and Agent Reyes both witnessed baby William exhibiting inhuman powers, like when he entertained himself by rotating his mobile with his little baby mind.

Former agent Jeffrey Spender (the Cigarette Smoking Man's other son, and Mulder's half-brother) claims to have neutralized William's genetic code by injecting him with magnetite in "William." But she and her baby have already been through too much for Scully to hope that he can live a normal life with her.

Wanting to hide William from the various players in the conspiracy, Scully arranges for him to be adopted. She confesses her decision to Mulder when he returns from being missing; and because trust is always paramount with them, he tells her that he knows she did the right thing.

Will Mulder and Scully meet their son again in The X-Files revival? I want to believe that they will; the sorrow in "Founder's Mutation" is palpable, and hasn't Scully especially been through enough? Even though they've missed their child's young life, I hope that, by the end of these six episodes, Mulder and Scully can be assured that William is happy, healthy, and safe. They're owed that much at least.

More like this
6 Mind-Blowing Fan Theories About How Stranger Things Will End
By Kadin Burnett
Why Sadie Sink Is Hopeful Max Will Return In Stranger Things Season 5
By Brad Witter
Hayden Panettiere Admits "Addiction" To Alcohol & Opioids Before Going Sober
By Jake Viswanath
Everything To Know About The 'Pretty Little Liars' Reboot On HBO Max
By Mary Kate McGrath, Jack Irvin and Radhika Menon
Get Even More From Bustle — Sign Up For The Newsletter